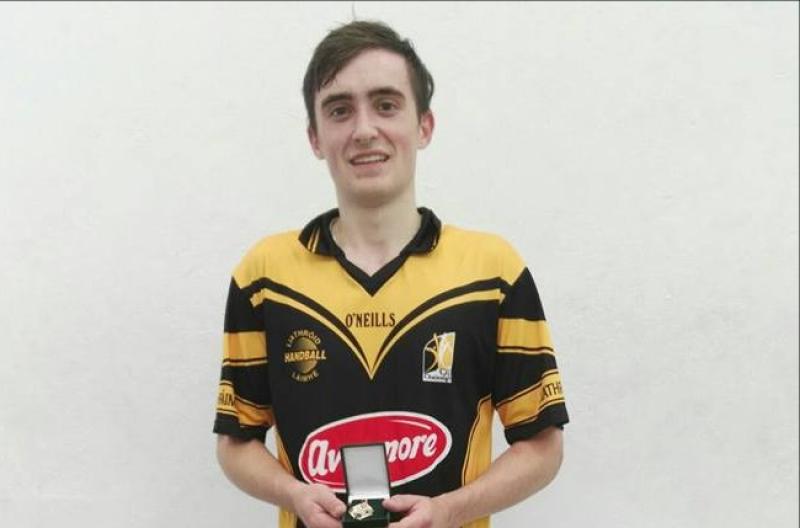 The Leinster singles handball championships reach the concluding stages over the next couple of weeks, and a number of Kilkenny players are in contention for honours.
In a double header programme in O’Loughlin’s on Saturday, finalists for the Leinster junior and minor singles were decided. So, it is a busy, busy time.
First up was the junior singles clash between Brian Mahon (Clogh) and Keith Burke (O’Loughlin’s) in a contest that went to three sets. The first two games were equally split; the first to Keith 21-18; the second to Brian 21-15.
In the third, the Clogh player got on top early on and was a convincing 21-4 winner. He now faces either Carlow or Wexford opposition in the Leinster decider.
The second match was the minor singles semi-final between Eoin Brennan (Kells) and Billy O’Neill, Clogh. The result was a 21-6, 21-15 victory for Eoin.
He awaits the winner between Ciaran Cooney (Clogh) and Cillian Hogan (Kildare).
National awards
The Kells player, along with Aoife Holden (Kilfane), is in line for national recognition this Saturday night as the winners of the Irish young male and female Players of the Year are honoured.
In other results from the Leinster intermediate championship, Ciaran Neary (Talbot’s Inch) failed in his attempt to reach the final. He was beaten by Daniel Kavanagh (Wexford) in Garryhill, 21-18, 21-12.
Tonight (Wednesday) in Tinryland, Eamonn Hawe (Windgap) will attempt to become the first player from his club to claim the Leinster junior ‘B’ singles title when he takes on Myles Carroll (Kildare) in the decider.
Gael Linn
The stranglehold Kilkenny had on the Gael Linn tournament in recent years ended at the weekend when the county’s representatives were beaten in the finals in Galway.
Having won the title for the last three years, the players from Clogh and Galmoy were confident of extending that great run on Sunday.
Unfortunately the dream ended as Clogh’s Michael Brennan and Aishling Cooney lost in the semi-final to Galway’s Abbeyknockmoy.
Galmoy’s Niall Drennan and Una Duggan were beaten at the quarter-final stage by Lahorna, Tipperary.
However, Niall and Una did have the consolation of winning the Plate when defeating Monaghan Harps in the final.
Rankings
Kilkenny are well represented in the national four wall handball rankings, which were released recently.
At number seven on the male list is Patrick Funchion (Kells). His brother Peter is two places behind at number nine. On the ladies list, Ciara Mahon, Clogh is ranked as fifth.
Fixtures
Thursday at O’Loughlin’s (1) at 7.30pm, IS Noel Doherty (Galmoy) v John O’Neill (Goresbridge); at Clogh (8pm) SD Paul Dowling/Shem Kelly (Mothel) v Eoin Brennan/Dan Breen (Kells)
Saturday at Kells (4pm) MsAD Eamonn and Jimmy Purcell (Windgap) v Joe Daly/Paul Geoghegan (O’Loughlin’s); 5pm JS Dylan Caulfield (Kilfane) v Sean Foley (Windgap); at Clogh (4pm) MsAD Johnny Brennan/David Bourke (M) v John Morrissey/Eddie Burke (O’Loughlin’s); 5pm JBD Eoin Bergin/Stephen Murphy (O’Loughlin’s) v Diarmuid Brennan/Patrick Brennan (M); at Windgap (6pm) IS Keith Bourke (O’Loughlin’s) v Eoin Brennan (Kells).
Monday at O’Loughlin’s (1) at 7.30pm JBD Aidan and Cathal Barry (Clogh) v Pauric Foley/Ptr (Windgap); 8pm JS Billy O’Neill (Clogh) v Dan Breen (Kells); at O’Loughlin’s (2) at 8pm JS Ciaran Cooney (Clogh) v Gavin O’Keeffe (Kells); at Kells (7.30pm) JBD Gary Law/Frank Law (M) v Darren Walsh/Eoin Cody (Windgap); 8pm MsAD Sean and Joe Walsh (Mullinavat) v Willie Holden/Tom Dooley (Kilfane); at Windgap (8pm) SD Diarmuid and Brendan Burke (Kells) v Keith Bourke/Kirk Greene (O’Loughlin’s); at Goresbridge (8pm) JS C.J. Delaney (Kells) v Eamonn Hawe (Windgap).