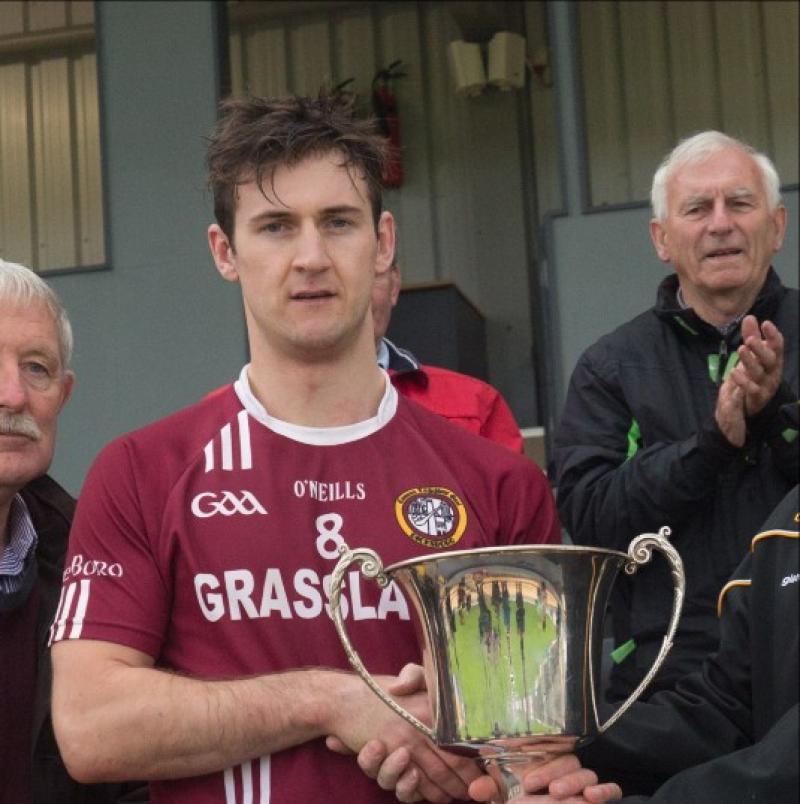 Dicksboro captain, Ollie Walsh, with the Walsh Cup, the prize for the winners of the Kilkenny SHC following their win last season

Kilkenny senior and intermediate clubs are facing a very disjointed season with uncertainty surrounding the dates available for the playing of local games.
The new round robin Leinster and Munster senior hurling championships close off May and June at least to local matches.
This will lead to clubs having to wait months for action between Rounds 2 and 3 of the senior and intermediate league/championships.
Clubs can pencil in the weekends of April 1 and April 15 as definite dates when the first and second rounds of the two main Kilkenny league/championships will be played.
Uncertainty
However, after that there is huge uncertainty. Possible dates for the third round games range from July 14 to September 2, depending on Kilkenny’s progress in the senior championship.
Kilkenny play their four matches in Leinster against Dublin (in Parnell Park on May 13); Offaly (Nowlan Park on May 20); Galway (in Pearse Stadium on May 27) and Wexford (Nowlan Park on June 9).
Results in those games will determined when Round 3 of the local senior and intermediate league/championships can be played.
The three options for the playing of Round 3 are - 1, September 2 if Kilkenny qualify for the All-Ireland final; 2, July 14 if Kilkenny don’t get out of Leinster; 3, August 12 if Kilkenny are beaten in the All-Ireland quarter or semi-finals.
The playing of Round 3 will determined the timeline for the two subsequent rounds of the league sections of both competitions, plus the finals.
Even the start date of the championships is up in the air at the moment.
September 16 or 23 are the possible dates for the senior, with September 9 a third option at intermediate level.
However, the county final dates are definitely on October 28 (senior) and October 21 (intermediate).
New league
Meanwhile, the County Board agreed to the format and dates for a new senior and intermediate league at Monday’s monthly meeting.
This competition, which can go ahead without the involvement of county players, will replace the Byrne Cup (senior) and Aylward Cup (intermediate).
It will involve the 24 senior and intermediate clubs playing in one competition. There will be three divisions involving eight teams in each.
Division One involves the eight clubs who qualified for the senior quarter-finals in 2017.
Division Two is made up by the remaining four senior clubs, plus the four intermediate semi-finalists from 2017.
Division Three is made up by the remaining eight intermediate clubs.
Seven Rounds
There will be seven rounds of games.
The top two teams will qualify for a League final.
The runners-up in each will play a Shield final while the last placed team in Division One and Two will be relegated.
The rounds of games have been fixed for March 10, March 17, June 12, June 26, Round 5 to be confirmed later, July 18 and August 24.
Division One - Clara v James Stephens; O’Loughlin Gaels v Mullinavat; Carrickshock v Ballyhale Shamrocks; Dicksboro v Erin’s Own.
Division Two - Bennettsbridge v Danesfort; Graigue-Ballycallan v Tullaroan; St Patrick’s v Rower-Inistioge; Glenmore v St Martin’s.
Division Three - Mooncoin v John Lockes; Young Irelands v Fenians; Tullogher Rosbercon v Lisdowney; St Lachtain’s v Thomastown.
Both Byrne and Aylward Cup trophies will csontinue to be used for competitions by the Co Board.