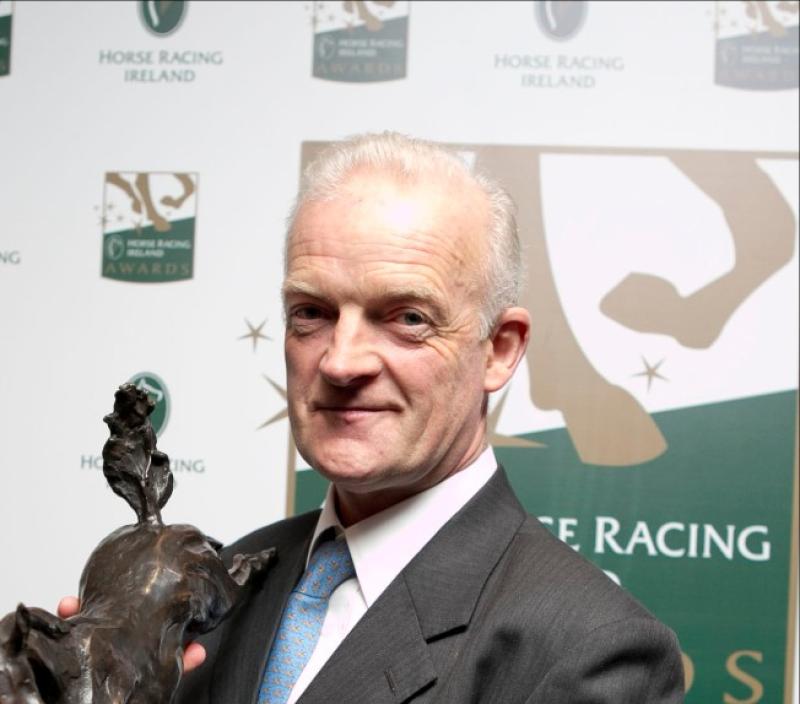 The Willie Mullins duo of Footpad and Invitation Only, early favourites for the Arkle Chase and the JLT Novices’ Chase at next week’s Cheltenham Festival, head a stellar entry for the Grade 1 Ryanair Gold Cup on the opening day of the Fairyhouse Easter Festival on Sunday, April 1.
There are 37 entries, an increase of 13 on last year, for the €100,000 event for which Mullins is responsible for 18 as he bids for a first win in the race.
Gordon Elliott is one up on the champion trainer in this regard as he was successful with Realt Mor in 2013. He has made 10 entries including his Grade 1-winning mare Shattered Love and the Grade 2 winners Monbeg Notorious, Jury Duty and Dounikos.
Petit Mouchoir is expected to give Footpad most to do in next Tuesday’s Arkle Chase and he has been entered by Henry De Bromhead, while Jessica Harrington has nominated her recent Thurles winner Jett and Noel Meade, successful with Road To Respect last year, has Snow Falcon.
There are four entries from Britain with Modus and Movewiththetimes possible runners for Paul Nicholls. Acting Lass and North Hill Harvey could represent trainers Harry Fry and Dan Skelton respectively.
The Fairyhouse Easter Festival will go a long way to determining the destination of this season’s National Hunt trainers’ championship. Both Mullins and Elliott will also be keen for success in the Grade 1 Irish Stallion Farms EBF Mares Novice Hurdle which has attracted an entry of 29 horses, up seven on 2017.
Mullins again looks to hold the strongest hand in the €100,000 event and his contingent of 12 boasts Laurina, an odds-on favourite for next Thursday’s Trull House Stud Mares' Novices' Hurdle at Cheltenham and leading juvenile hurdler Stormy Ireland.
Lackaneen Leader heads a trio of entries from Gordon Elliott, while High School Days and Alletrix have been entered by Henry De Bromhead and Jessica Harrington respectively.
There are six entries from British-based trainers with Nicky Henderson entering both Countister and Dame De Compagnie. Fergal O’Brien has Cap Soleil entered up while Dan Skelton, Emma Lavelle and Anthony Honeyball could be represented by Momella, Woolstone One and Midnight Tune respectively.
Peter Roe, General Manager of Fairyhouse Racecourse, said they were delighted with the strength and depth of entries for both the Ryanair Gold Cup and Irish Stallion Farms Mares Novice Hurdle.
"It is especially pleasing to see multiple entries from leading British trainers Nicky Henderson, Paul Nicholls, Harry Fry and Dan Skelton and we look forward to them taking on the best Ireland has to offer,” he added.