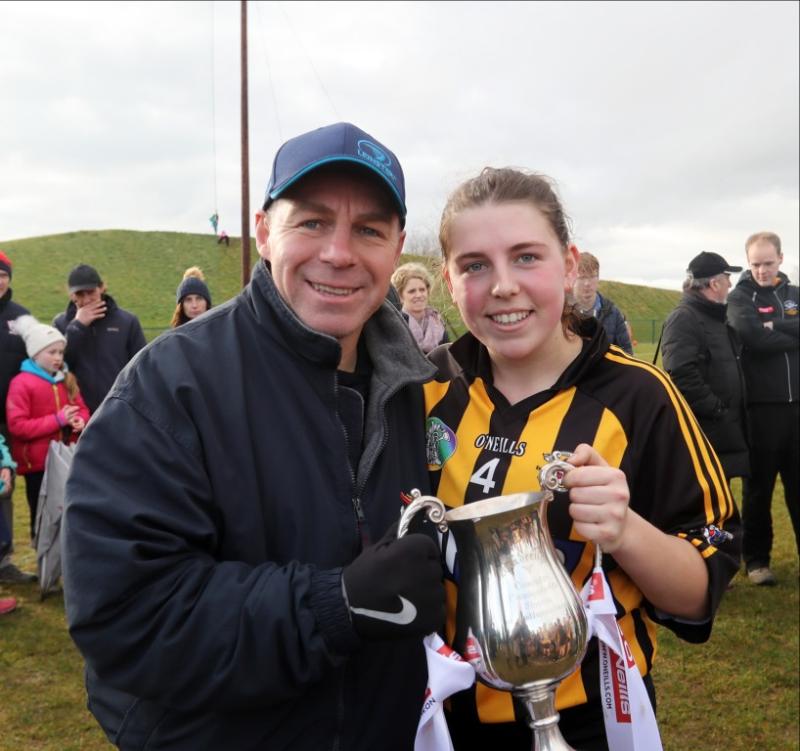 Former Kilkenny star, Charlie Carter with his daughter, Nicole with the All-Ireland trophy after she helped Loreto, Kilkenny to victory in the colleges senior camogie final. Pic: John McIlwaine

Best known as a former Kilkenny hurling captain and three-time All-Ireland winner, Charlie Carter will be donning the cap of Cheltenham Festival breeder this week.
On Thursday Grade 2 winner Maria’s Benefit (IRE), who he bred out of his first broodmare, runs in the Dawn Run Mares’ Hurdle. ITM spoke to Charlie ahead of the big day.
You must be enjoying the winning run of Maria’s Benefit (IRE)- unbeaten on her last five starts, including a Listed and Grade 2 victory. How do you fancy her chances at Cheltenham?
"It’s been a real thrill over the winter. We had an idea she’d be decent, but what’s she’s done is beyond our wildest dreams.
"All the talk is about the Willie Mullins’ mares (Laurina and Stormy Ireland), but I think Maria’s Benefit (IRE) goes to Cheltenham with a live chance, though she’ll have to be at her best."
Will you be there to cheer her home in the Dawn Run Hurdle?
"I certainly will! I’m going with my father-in-law. As well as Maria’s Benefit (IRE), I have two other horses to cheer on, who I bought as foals and sold as stores.
"I bought Band Of Blood (IRE) as a foal at  Tattersalls Ireland November NH Sale and he runs in the Kim Muir for Dr Richard Newland. I bought Last Goodbye (IRE) as a foal (Goffs December NH Sale) and Liz Doyle runs him in the Grade 3 Chase on the same day.
"But the homebred will take pride of place. Every national hunt breeder dreams of a Cheltenham Festival winner. That's the ultimate accolade."
All three of the runners out of her dam Youngborogal (IRE) are winners, an impressive strike rate for the mare. What made you choose that mare?
"I remember going to the sales at Tattersalls Ireland in 2001 to buy a few foals to resell as stores. It was my first venture into that sort of thing, though I’d bred sport horses before, as my dad had.
"I bought one or two colts that day, but then this chestnut filly walked into the ring and she caught my eye. She had a good stride and caught my eye a few times, as did Papillon (IRE) on her page!
"I put her into training and she finished second first time out for Mags Mullins. She got injured and after a break, I put her in training with my cousin, Michael Fitzgerald. I used to go down to ride her out myself on Saturday mornings and she was placed a few times, before winning her maiden hurdle by 13 lengths at Naas.
"She was in foal at the time, so our options after that were limited, but she’d done what I wanted. We just needed a win under our belt."
What made you race Maria’s Benefit (IRE) and not sell her?
"When we had a three-year-old Beneficial filly, I was humming and hawing about what to do, but I took a chance and sent her to James Doyle. We soon knew she was decent and she won first time out at Dromahane.
"She didn’t make her reserve at the sales after that. She’s not the biggest mare, and I suppose that could have put some people off. We sold her on a few days later, privately to J.D. Moore and Stuart Edmunds has done a smashing job with her."
She’s certainly gone from strength-to-strength…
"To do what she did at Taunton (she made all and won by 30 lengths), she showed she’s as tough as old boots. I was in Limerick the day of the race and put a small wager on her.
"I came out of the bookies and leapt 10 feet in the air, not because of my winnings, but for winning me black-type. That’s what every breeder dreams of.
"I hope she does the same at Cheltenham; turning for home in front and then all we have to do is pray she holds on."
Do you have any of her siblings at home?
"I have five siblings, including an Oscar (IRE) half-sister in training with James Doyle. We actually tried to win the same race Maria’s Benefit (IRE) won, but the ground was too soft and she was pulled up. She’s been freshened up ad should run again soon.
"I also have a four-year-old Oscar (IRE) filly, a three-year-old Stowaway filly, a Fame And Glory two-year-old colt and a Milan yearling colt. The Stowaway is the spitting image of her big sister and she will go to the Goffs Land Rover Sale."
Do you still have their dam?
"Yes, I still have her and she’s in foal to Well Chosen. She’s 17-years-old now, but she’s in great nick. I’m not sure which stallion we’ll send her to after she foals in May, we’ll wait and see.
"She’s my only thoroughbred mare and I have a few sport horse mares, all kept at home."
Would you be more confident going to the sales with a filly, with Maria’s Benefit (IRE) flying the flag for national hunt fillies?
"I think there’s great racing for fillies these days, but I still think there’s too big a gap between the prices paid for them and for the geldings. It’s surprising given the prize money and incentives on offer.
"I’m glad of J.D. Moore, who took a chance in buying Maria’s Benefit (IRE). We need more buyers like him."