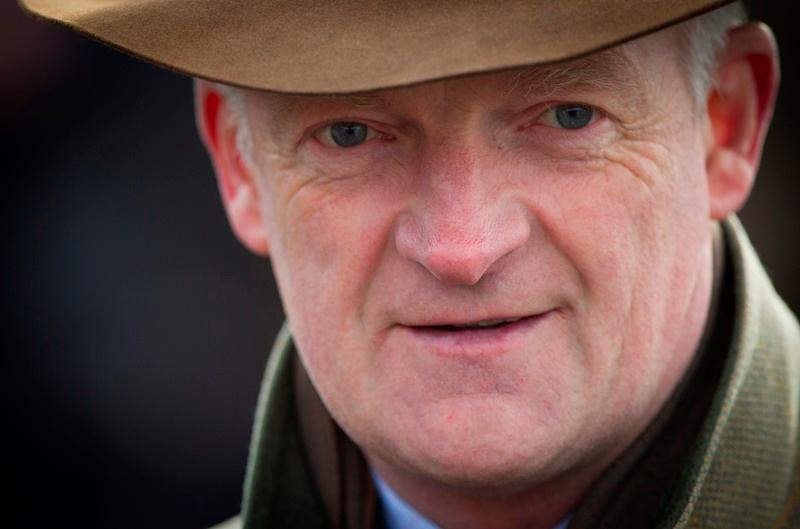 Willie Mullins has prepared a formidable team for Punchestown 2018

Irish racing is getting braced for a heavyweight rematch as Willie Mullins and Gordon Elliott are get set to go toe-to-toe again at the five-day Punchestown Festival.

Mullins overhauled Elliott’s trainers championship lead during the Punchestown Festival last year to remain as Ireland’s champion trainer but it is set to be another fascinating week as Elliott currently holds a €550,000 advantage. However, with over €3,000,000 in prize money on offer at Punchestown the race is far from over.

Mullins is preparing another formidable team for the Punchestown Festival which begins on April 24th.

The master of Closutton claimed a 15th Lemongrass Leading Trainer Award at the five-day Punchestown Festival last year and he reports his big names to be in good health ahead of the National Hunt season finale.

“The horses that have ran at Cheltenham and at Fairyhouse appear to have come out of their races fine and we are looking forward to being well represented at Punchestown,” Mullins said.

“Punchestown has been a very good track for us and over the week of the Punchestown Festival they offer great prize money and some fantastic facilities and it is always our intention every season to be in a position to bring our best horses there.”

The Grade 1 BoyleSports Champion Chase on Tuesday, April 24, always attracts a stellar cast of two-mile chasers and Douvan could be in line to make his first start in Ireland since winning the Tied Cottage Chase at Punchestown in February last year.

“Douvan is good,” Mullins said. “He seems fine since Cheltenham and we are training him towards Punchestown and the BoyleSports Champion Chase. Min is entered in Aintree but could still run at Punchestown and Great Field has pleased me since Navan and would be under consideration for that race also. I was very happy with his effort at Navan on his first run of the season. Un De Sceaux won nicely at Fairyhouse and the plan would be for him to go to the Champion Chase as well. He hasn’t done much since Fairyhouse but he’s made of iron and we are looking forward to it.”

Djakadam played his part in one of the most exciting finishes of last season when splitting Sizing John and Coneygree in the Grade 1 Coral Punchestown Gold Cup and he is likely to once again form part of the Mullins team in the race this year on Wednesday, April 25.

“Djakadam will definitely go for the Coral Punchestown Gold Cup and that would look to be the race for Killultagh Vic also. Bellshill bypasses Aintree after his run in the Irish Grand National and so far he appears to be fine following his run last Monday so he would be another one that we would be considering for the Gold Cup at Punchestown. Yorkhill has options over hurdles and fences and there’s no decision as to where he will go yet.”

Among the options for Yorkhill is the Grade 1 Ladbrokes Champion Stayers Hurdle on Thursday, April 26, where Mullins is looking forward to running the Cheltenham Stayers Hurdle hero Penhill.

“We were obviously going to Cheltenham hoping that Penhill could do what he did and win there without a run but the closer it got to the race I was just hoping to myself that he could run well at Cheltenham and then come back for this race at Punchestown – it was some prep run!

“We have made other entries for the race and we’ll see closer to the time. Bacardys would be likely to go there and Benie Des Dieux has options. She could go for this race or else run in the EBF Mares Champion Hurdle later in the week.”

Mullins also has a choice to make over Faugheen who is among the entries for the Ladbrokes Champion Stayers Hurdle and the Grade 1 BETDAQ Punchestown Champion Hurdle on Friday, April 27.

“Faugheen likes it around Punchestown and could go back there for the Punchestown Champion Hurdle, which is a race he has won before, or we could step him up in trip. We’ll see how his work is in the coming weeks. Melon will definitely go for the Champion Hurdle and we are looking forward to bringing him there after his run at the Cheltenham Festival. Wicklow Brave was a pleasant surprise when winning the race last year and he’ll go back to try and win it again. We know he has that sort of ability. Coquin Mans did it nicely at Fairyhouse last week and I’ll go through my options for him but he could be another for the Champion Hurdle but he is also in the Stayers Hurdle.”

“I’m not sure what route I want to go with Laurina but we have given her three entries and she is on course to run at Punchestown. Getabird is another to have run at Fairyhouse and will line up at Punchestown in either the two-mile novice or possibly the two and a half miles.”

Mullins trained the first three home in the Champion Bumper at Cheltenham last month and reports his bumper team to be well.

“There’s a good programme of bumpers at Punchestown including some good mares bumpers so we would hope to have plenty of runners in those races. Relegate, Carefully Selected, Tornado Flyer, Blackbow and Colreevy all ran well in the Champion Bumper at Cheltenham and are all in line to run at Punchestown. Hollowgraphic missed Cheltenham but he is being trained with Punchestown in mind.”

The 2018 Punchestown Festival runs from Tuesday, April 24 to Saturday, April 28. The grand finale of the jump racing season in Ireland boasts 12 grade 1 races and prize money of over €3 million. For full information see www.punchestown.com