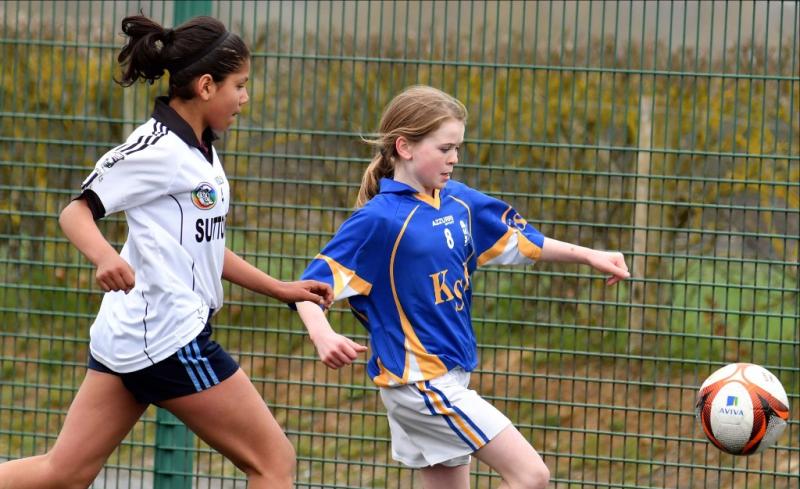 It's D-Day for two of Kilkenny's soccer-mad schools as they travel to Navan’s impressive MDL Grounds today (Thursday) in search of Leinster glory.

Stoneyford's Scoil Chiaráin Naofa and the city's Kilkenny Schools Project are just two of the 24 schools and some 192 students who are hoping to be named the SPAR FAI Primary School 5s Leinster Champions for 2018.

The provincial finalists came through rigorous qualifying stages at county level and then regional events before making it to the provincial decider. Ten counties will be represented - along with Kilkenny schools from Dublin (six schools), Meath (four), Carlow (three), Kildare (three), Offaly (two), Louth, Longford, Wicklow and Wexford all in the mix.

This season’s 24 schools will line out in six sections based on their school size which is dependent on their enrolment numbers. The small schools will be catered for under the SPAR ‘A’ Cup while the medium schools will participate in the SPAR ‘B’ Cup and the large schools will tog out in the SPAR ‘C’ Cup. Boys and girls are encouraged to play together but there is separate competitions for girls only.

The event saw 31,728 children participate this year. The competition has been running since the mid 1990’s, the event is more popular than ever with an impressive 1,528 schools involved in 2018.

The SPAR ‘A’ Cup division will see Dunderry outfit Scoil Seosam Naomtha up against Offaly’s Clonlisk NS, St. Mary’s NS, Donnybrook and Scoil Naomh Bríd of Kildare. All four are relatively new to this level of competition so it should make for some interesting billing with the excitement levels at a premium among the travelling supporters.

The SPAR Girls ‘A’ Cup have Churchtown’s Good Shepherd NS lined out against Wexford side St. Fintan’s NS, Bellurgan NS from Louth and Kilkenny’s impressive Scoil Chiaráin Naofa. The quartet have impressed along their County qualifiers so it will be a tight contest in this section.

The SPAR ‘B’ Cup welcome local lads O’Growney’s NS from Athboy, along with two gaelscoils in Gaelscoil Chulain Dolcain of Dublin and Gaelscoil an Inbhir Mhóir of Wicklow accompanied by Kildare’s Scoil Bhríde of Milltown. The last time the Athboy crew appeared at the provincial finals was back in 2012 when they claimed gold and went on to win the National title that season. Can the Meath side do likewise in 2018?

Carlow’s Rathoe NS are joined alongside Scoil Choimcille, Skryne, Kilkenny Schools Project and Dublin ladies Bracken ETNS for an enjoyable outing. This grouping will be one to watch as the Kilkenny squad are looking to defend their title in the SPAR ‘B’ Girls Cup.

The larger schools select have Scoil Assaim, Raheny, our friends Bishop Foley NS, Bunscoil Buachaillí Réalth na Mara and the experienced Scoil Uí Riada of Kildare bidding for a top podium finish in the SPAR ‘C’ Cup competition. Bishop Foley were Leinster Champions in 2011 and 2014 when they last appeared in the provincial stages with runners up medals at the Nationals on both occasions while the Kildare students were runners up twelve months ago. Can they make it gold this time out?

The SPAR Girls ‘C’ Cup are delighted to welcome St. Philomena’s NS from Offaly to the Meath venue with Scoil Mhuire gan Smál NS, Carlow, Our Lady of Good Counsel GNS from the Capital and Newtownforbes starlets Scoil Mhuire of Longford in a promising group. It’s St. Philomena’s first time out at the Leinster showcase and the girls will be buzzing to get playing.  The trio will have to keep a close eye on the reigning Leinster Champions Our Lady of Good Counsel. The Johnstown contingency were exceptional last season picking up provincial and National silverware in the number one spot in the larger schools category. Can David O’Connor’s charges make it two in a row tomorrow afternoon?

Martin O’Neill will be special guest at the MDL event as his appearance pitch-side will coincide with the Republic of Ireland’s squad announcement for the forthcoming friendly fixtures.