Anna is simply the best in Leinster 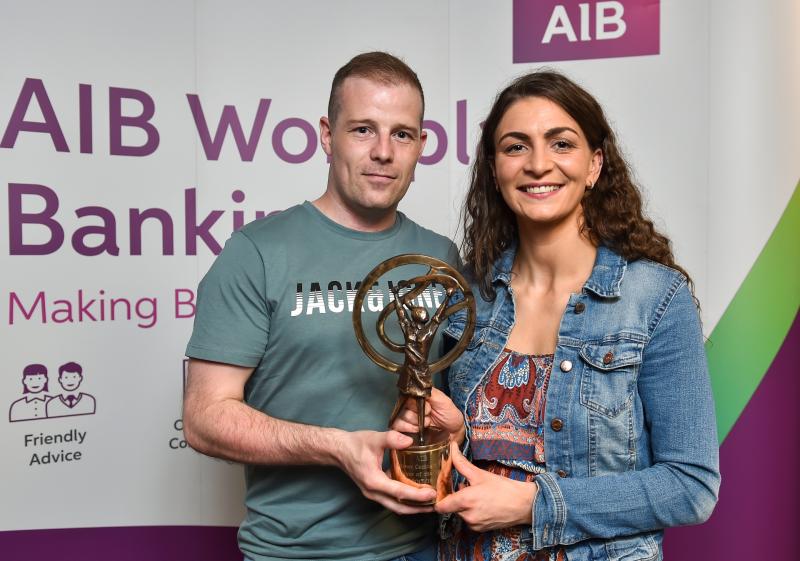 Anna Farrell is presented with her award

Thomastown’s Anna Farrell has been awarded the AIB Provincial Club Player of The Year in Leinster for 2017-18.

Farrell was honoured for her individual performance, dedication, commitment and passion that she has shown to her club, Thomastown’s throughout the 2017-2018 season.
Farrell and her family epitomises ‘Club is Family’ as she lines out with her sisters and cousins for Thomastown.
Anna was presented with the award by Fergal Freyne, AIB Kilkenny branch manager and Pat Martin, chairperson of Leinster Camogie Board in AIB’s local branch in Kilkenny.
The celebration saw Anna, her family, her fellow club members from Thomastown and AIB staff celebrate the prestigious award and Anna’s achievements over the past season.
Thomastown, after a gripping battle, narrowly lost to Derry’s Slaughtneil in the AIB All-Ireland camogie senior club championship semi-final, a fixture that had to be brought to extra-time.
Slaughtneil then went on to claim All-Ireland glory.
AIB, proud sponsors of the camogie club championship, announced a five-year extension to their Gaelic Games sponsorship of Backing Club and County.
The extension covers the AIB All-Ireland camogie club championships which AIB have been title sponsor of since 2013 when it was added to their long-term association with the AIB GAA All-Ireland club championship that commenced for the 1991/1992 season.
AIB have been involved with the All-Ireland senior football championships for the last three years.
Speaking at the event, Fergal Freyne, AIB Kilkenny branch manager said AIB was delighted to honour Anna, who is one of the country’s greatest club camogie players.
GAA community
“Anna Farrell and her family are a huge part of the local GAA community here and it’s very fitting that we presented the award in our local branch,” he said.
“For the past five years we have sponsored the camogie club championship in which we have livestreamed camogie finals that may not have been televised.
“We are thrilled to partner with the camogie club championships for a further five years,” he added.
Pat Martin, chairperson of Leinster Camogie Board said the evening was a great opportunity to honour Anna Farrell, one of the top performers in the AIB All-Ireland camogie club championships and to recognise the great skill and dedication which she has shown throughout the 2017/18 club championship season.
Huge Honour
“To represent your club and your parish is a huge honour for any player,” he felt.
“l take this opportunity to congratulate Anna and her club and to thank AIB for their continued support in highlighting such fabulous role models for all young camogie players,” he added.