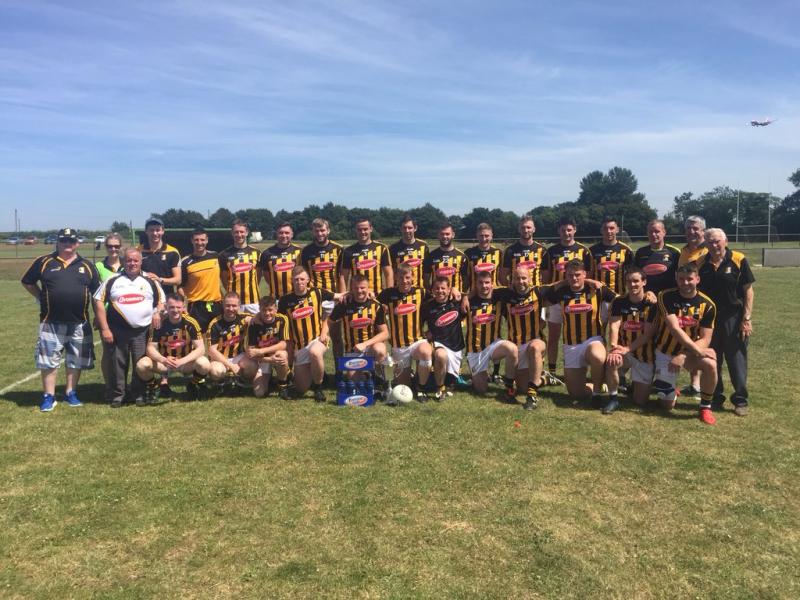 CHAMPIONS: The Kilkenny Gaelic Football team who retained the British JFC title at the weekend

Kilkenny for an All-Ireland football title? The dream is a step closer to reality after the Cats stormed their way to the British junior crown with a high-scoring display.
Christy Walsh’s side shot the lights out in Birmingham on Sunday, putting Warwickshire to the sword as they retained the Sam Maguire Trophy and set up an All-Ireland semi-final meeting with Galway.
It was a display of power football from Kilkenny, who set the tone with an early scoring blast.
Ian Duggan got the ball rolling, notching two quick frees before John Maher added one from play to send the visitors on their way. Duggan was only finding his feet and stepped up the pace with another 1-1 to swiftly leave Kilkenny 1-4 to 0-1 to the good with 17 minutes on the clock.
Warwickshire played some fine possession football, but couldn’t find a way through a Kilkenny defence which was well marshalled by centre-back Patrick McConigley.
It looked like the Cats’ stride would be checked when they lost wing-back Murt Gaffney to injury, but Joe Fennelly slotted in seamlessly, ensuring no way through for Warwickshire.
With confidence coursing through the side, Kilkenny went on a scoring burst which left them comfortably ahead by half-time. Mullinavat’s Jim Culleton (1-1) and captain Michael Malone raised a green flag apiece, while points from Dicksboro duo Eddie Moylan and Shane Stapleton saw the Cats reach the interval with a 12-point lead (3-7 to 0-4).
Although half-way to their target, Kilkenny didn’t let up when play resumed. Mick Kenny highlighted the determined mood in the black and amber ranks when he sliced through the Warwickshire defence to rifle the ball to the back of the English side’s net.
Warwickshire fought back, but with Kilkenny in a mean mood their defence conceded just five points in the second half.
While Warwickshire found scores hard to come by, Kilkenny kept picking them off. Full-forward Ian Duggan helped himself to 1-2, while sub Ben Hickey also got in on the goal-scoring act.
Michael Malone played a captain’s part, chipping in with another 0-2 with Jim Culleton (0-1) completing the scoring.
Team Performance
It was a complete team performance from the Cats, a victory which was complemented by the fact that all the subs more than played their part when introduced.
A side who are improving with every game under the tenure of Christy Walsh, J.J. Grace (trainer) and John Dowd (selector), Kilkenny will not fear Galway when the teams lock horns in their semi-final. That game is expected to be played on the weekend of July 7 and 8.
SCORERS: Kilkenny - Ian Duggan (2-5); Michael Malone, Jim Culleton (1-2 each); Mick Kenny, Ben Hickey (1-0 each); John Walsh, Eddie Moylan, Shane Stapleton (0-1 each).
Kilkenny - J.J. Sullivan (St Patrick’s); Aaron Duggan (Dicksboro), Richard O’Hara (Thomastown), Paul Kelly (Railyard); Martin Gaffney (Dicksboro), Patrick McConigley (Railyard), Shane Kelly (Mullinavat); Sean Dowd (Railyard), Michael Malone (Mullinavat, captain); Mick Kenny (Lisdowney), Jim Culleton (Mullinavat), Shane Stapleton (Dicksboro); Eddie Moylan (Dicksboro), Ian Duggan (Mullinavat), John Walsh (Mullinavat). Subs: Joe Fennelly (Mullinavat), Jim Power (John Lockes), Luke Hickey (James Stephens), Ben Hickey (James Stephens), Conor Joyce (Rower-Inistioge), Brian Cahill (Railyard).
Warwickshire - Macauley Felgate; Eamon Culliney, Niall McCooey, Shane Keogh; Liam Gilbride, Paddy Kilkenny, Michael Mannion; Andy Willis, Niall Gilbride; Jack Keogh, Kevin Ryan, Mark O’Hare; Conal Dowling, Joe Owens, Barry Sharkey.
Referee - Mattie Maher (London).