What a Tri-umph! Bumper crowd flocks to Marble City for Kilkenny Triathlon 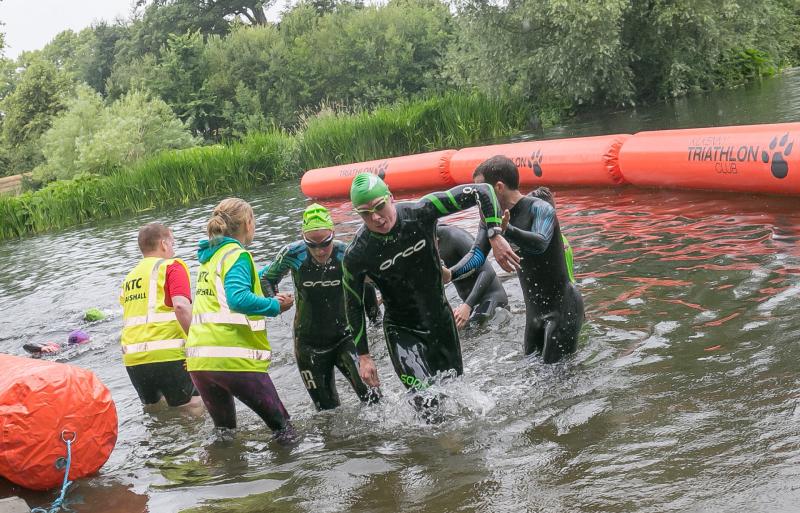 Some of the participants finishing the swim section of the Kilkenny Triathlon PICTURE: PAT MOORE

The rain may have broken the spell of glorious weather that Ireland basked in for the last few weeks, but it couldn’t dampen the spirits of hundreds of people who turned out to tackle the Kilkenny Triathlon on Sunday.

Some 400 hardy souls - including this reporter! - made light of the elements to participate in the latest offering from the Kilkenny Triathlon Club (KTC).

The Castle Park was the home for the event, which brought people from all over Ireland and beyond together to swim in the River Nore, take on a 20km cycle and finish with a 5km run through the Park.

First to dip their toes (literally) into the triathlon scene were the members of the Try A Tri group, who took on a 250m swim before exiting the river and running back to the Castle to get on their bikes and hit the road.

Hot on their heels was the first wave of the regular sprint triathlon group, who had to complete a 750m swim.

For a first-time Nore swimmer it was slightly surreal to look at Kilkenny Castle from a different angle.

There wasn’t much time for sightseeing though - the cold water kept you alert; yes, it was cold! - but with great support from the band of ever-present lifeguards everyone got to the finish line.

After the swim came the 20km cycle which took participants out to Danesfort and across to Bennettsbridge before heading back to the city - a route which became a little trickier thanks to the greasy roads. Again watchful stewards were on hand to advise cyclists of dangerous stretches.

Once the bikes were safely parked in the transition zone it was on to the three-lap 5km course through the ’Park. After that, the finish line was followed by a well-deserved celebration party for triathletes and volunteers alike.

Organising the event is a challenge, but as far as the triathlon club were concerned it was all worthwhile.

“We were delighted with the turnout for this year’s event,” said KTC’s Roisin O’Brien. “With every club competing for attention we were very pleased with the numbers who registered for our triathlon.

“The Try A Tri option sold out very quickly, which was a great to see as it showed us there is a market for this type of competition.”

This year’s event also marked an environmental first for KTC.

“We decided to go green with this year’s triathlon,” O’Brien explained. “By eliminating plastic bottles from the event we saved on 2,000 bottles and cut down massively on waste.”

The club, who thanked the OPW, Gardai, Water Safety and the County Council for their support, will have a race debrief this week. After that it’s time for a well-deserved rest.

But not too long - it is triathlon season, after all...