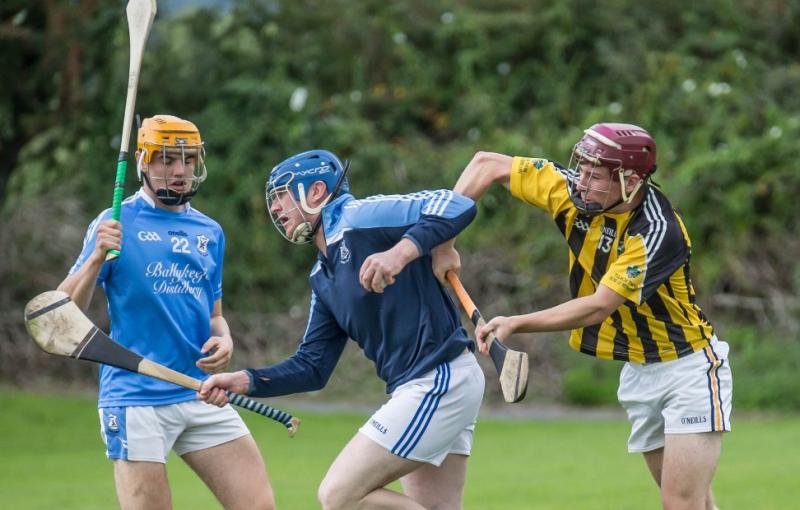 Graigue-Ballycallan goalie Ciaran Hoyne brought off one magnificent save

Graigue-Ballycallan rode their luck but they hung on tenaciously in the end to sneak through to the Kilkenny intermediate hurling championship final when beating chance missing Tullogher Rosbercon in the first semi-final in Nowlan Park.
The losers will have huge regrets after this one. They shot a massive 10 wides during the opening half, and half that amount again afterwards.
In the end they threw everything but the kitchen sink at Graigue in a bid to grab a goal, but there wasn't one there for them against a rearguard that put body and soul into the effort.
The winners, who also contested the final last season, now play either neighbour, Tullaroan or St Lachtain's (Freshford), who contest the second semi-final today.
There was nothing between the teams during the opening quarter when the scores were level three times. Tullogher, playing with a two man full-forward line and with a packed defence on the '40', fell behind in the 17th minute when Graigue goalie, Ciaran Hoyne , pointed a free from his own '50' (0-4 to 0-3).
They hit the break trailing by 0-8 to 0-7 after missing chance after chance. They added three more misses during the next quarter when the gap rose slightly to 0-11 ot 0-9.
The third miss came after Graigue goalie Hoyne brought off a miraculous save from Conor Hennessy at the concession ofa 65, which was put wide.
The gap was down to a brace of points in the 56th minute when Richard Dollard posted Tullogher's last score, but Graigue finished with a terrific 62nd minute minor from Billy Ryan to guarantee themselves against defeat.
It was up to the defence to hold out after that, and it did in some style.
SCORERS: Graigue-Ballycallan - Conor Murphy (0-4); Sean Ryan, Billy Ryan (0-3 each); Sean O'Dwyer, Shane Butler, Jesse Roberts, Ciaran Hoyne (0-1 each). Tullogher-Rosbercon - Cian O'Donoghue (0-6); Richard Dollard, Shane Ryan (0-2 each); Conor Hennessy (0-1).