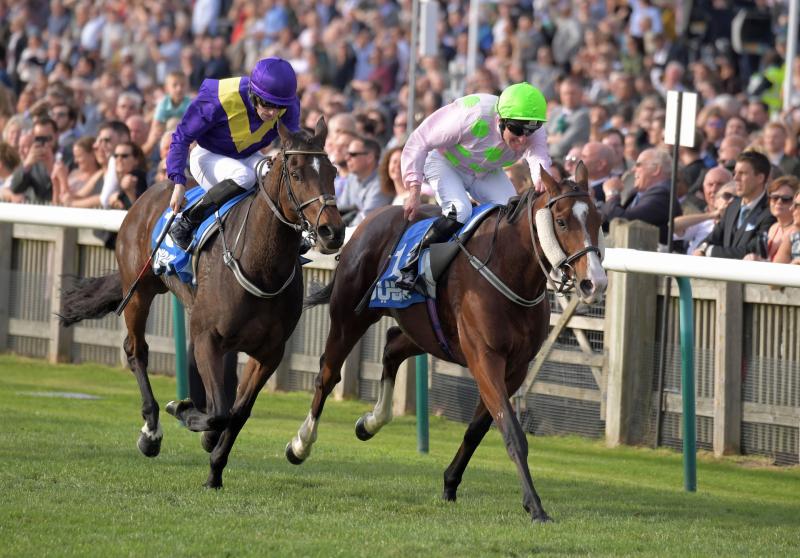 Willie Mullins captured yet another high-profile race on the Flat when the Seamie Heffernan-ridden Low Sun took the Dubai £500,000 Cesarewitch Handicap at Newmarket on Saturday.

The champion jumps trainer had seven runners in the race and landed a one-two with Uradel just beaten a neck into second place.

Mullins’ brother Tom landed a notable success of his own at Limerick on Sunday where Spider Web and Luke Dempsey came late and fast to win the JT McNamara Ladbrokes Munster National on Spider Web.

The 12/1 chance closed up on the leaders between the final two flights and collared Na Trachtalai Abu in the dying strides for a memorable victory in the colours of JP McManus.

Joseph O’Brien and Rachael Blackmore teamed up to land their first winner together when Young Turk came through late to win the beginners’ chase at Tipperary on Monday.

In the colours of Gigginstown House Stud, the 5/1 chance finished well to deny the Gordon Elliott-trained Burren Life. O’Brien had also won the opening maiden hurdle with Choungaya, another for Gigginstown, ridden by Mark Walsh at odds of 8/1.

Willie Mullins landed two winners at Galway on Tuesday. Barry Geraghty was in the saddle as 5/2 chance Sancta Simona took the opening maiden hurdle in the JP McManus colours while Paul Townend was the man on top as Voix Du Reve made a thoroughly impressive debut over fences in the beginners’ chase.

A fair hurdler, he was sent off the 13/8 joint-favourite and made all the running to see off his main market rival Mind’s Eye by seven and a half lengths. Not everything went the way of the champion trainer however and his Poker D’Ainay, the 2/1 favourite was no match for the Joseph O’Brien-trained 7/2 chance Midnight Run which made a winning start to his career in the Jamie Kyne Memorial Flat Race in the hands of Tom Hamilton who sported the Annus Mirabilis Syndicate.

Joseph O’Brien was also among the winners on the all-Flat card at Cork on Wednesday where the Wayne Lordan-ridden Ship Of Dreams made most of the running to land the Listed Navigation Stakes.

Sent off the 15/8 favourite, she had two and a quarter lengths to spare of the Aidan O’Brien-trained North Face at the line.
Donnacha O’Brien was in the saddle as King’s Field put an unlucky run at Fairyhouse behind him to win the 7f maiden. Joseph shared a winner with Shane Foley at Dundalk on Friday night where Cnoc An Oir landed the 7f fillies’ median auction maiden.

The home winners kept coming for Willie Mullins as he teamed up with Paul Townend to win the mares’ beginners’ chase at Fairyhouse on Saturday with Bargy Lady. The 9/4 favourite overcame a mistake at the final fence to beat Polar Present by two and a half lengths.

Rachael Blackmore might have lost her position at the head of the jump jockeys’ table over the weekend, but she did bag a winner at Fairyhouse on Saturday where she teamed up with Henry De Bromhead to win the 2m maiden hurdle Jan Maat.
The 11/4 chance had plenty in hand when accounting for the Gordon Elliott-trained 2/5 favourite sometime Soon which also sported the famous maroon and white colours.

Paul Townend is now out on his own at the head of the championship race after his success on the Willie Mullins-trained Robin De Carlow in the Listed Maurice Power Solicitors Irish EBF Mares Hurdle at Limerick on Sunday.

Shane Foley landed his 55th winner of the season when partnering the John Murphy-trained Brazos to win the Irish Cesarewitch at Navan on Sunday.

It has been a great year for the freelance rider who scored a notable success on the Ken Condon-trained Romanised in the Irish 2,000 Guineas at the Curragh in May.

Jim Bolger was also on the mark at Navan where the Luke McAteer-ridden Vocal Music won the apprentice handicap at odds of 14/1.