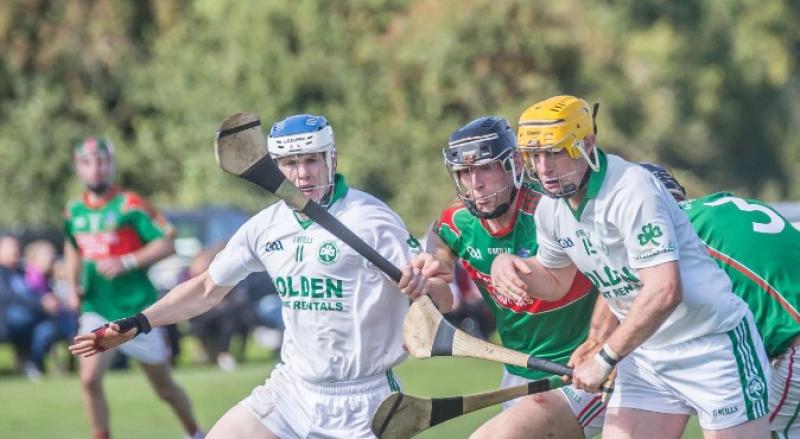 Ballyhale Shamrocks didn't have things their own way for much of the second half, but they still charged to a strong 16th success in the Kilkenny senior hurling championship final at packed Nowlan Park today.
Bennettsbridge put in a big second half and at one stage had the arrears back to 2-15 to 2-12 after Brian Lannon bagged two goals within eight minutes of each other, but Shamrocks finished well to take the title and claim the right to represent Kilkenny in the Leinster club championship.
The title looked to be going South when young Brian Cody grabbed a 36th minute point to push Shamrocks 2-14 to 1-9 clear.
That was only minutes after Brian Lannon had scored his first goal for Bennettsbridge. However, after the 'Bridge powered on and out-scored the Shamrocks by 1-3 to 0-1 during the following six minutes with Lannon shooting a second goal, the title was up for grabs big time.
The divide was down to 2-15 to 2-12. Shamrocks simply drove on. A great point from Ronan Corcoran helped them through what was their most difficult stage of the match.
When Eoin Reid took a pass from his brother, T.J. to shoot a point and up the gap to 2-17 to 2-12 heading towards the closing 10 minutes the Shamrocks looked to be back on course within touching distance of another win.
Bennettsbridge chased with all their might to the finish, but they never looked like saving the game and adding to their 12 championship wins.
Shamrocks, led by the on fire T.J. Reid, blasted the opposition from the start. With Reid contributing 1-4 they raced eight points clear within seven minutes of the start (1-5 to no score).
The 'Bridge opened their account through free taker, Nicky Cleere, but they were always under pressure to cope during this half. When Shamrocks had a second goal from Eoin Cody (2-7 to 0-5) they were looking really good.
At half-time Shamrocks led by 2-12 to 0-8.
When Brian Lannon pulled back a goal for Bennettsbridge in the 34th minute he opened the contest, but despite playing some fine hurling afterwards, the losers were always climbing a hill.
SCORERS: Ballyhale Shamrocks - T.J. Reid (1-10, eight frees); E. Cody (1-1); B. Cody (0-2); E. Shefflin, D. Mullen, R. Corcoran, E. Reid, C. Fennelly, A. Mullen, M. Aylward (0-1 each). Bennettsbridge - N. Cleere (0-7, six frees); B. Lannon (2-1); E. Morrissey, J. Cleere (0-2 each); R. Lennon, D. Blanchfield, A. Cleere, L. Blanchfield, S. Morrissey (0-1 each).
Ballyhale Shamrocks - D. Mason; C. Walsh, J. Holden, B. Butler; E. Shefflin, M. Fennelly, D. Mullen; R. Corcoran, R. Reid; A. Mullen, T.J. Reid, B. Cody; E. Reid, E. Cody, C. Fennelly. Subs - M. Aylward for E. Reid; P. Mullen for D. Mullen; J. Cuddihy for E. Cody; G. Butler for E. Shefflin; B. Aylward for B. Cody.
Bennettsbridge - E. Cleere; C. Murphy, R. Lennon, C. Wafer; E. Morrissey, J. Cleere, D. Wafer; K. Blanchfield, D. Blanchfield; A. Cleere, L. Blanchfield, N. Cleere; D. Walsh, B. Lannon, S. Morrissey. Sub - D. Coyne for D. Walsh.
Referee - P. Cahill (Dunnamaggin).