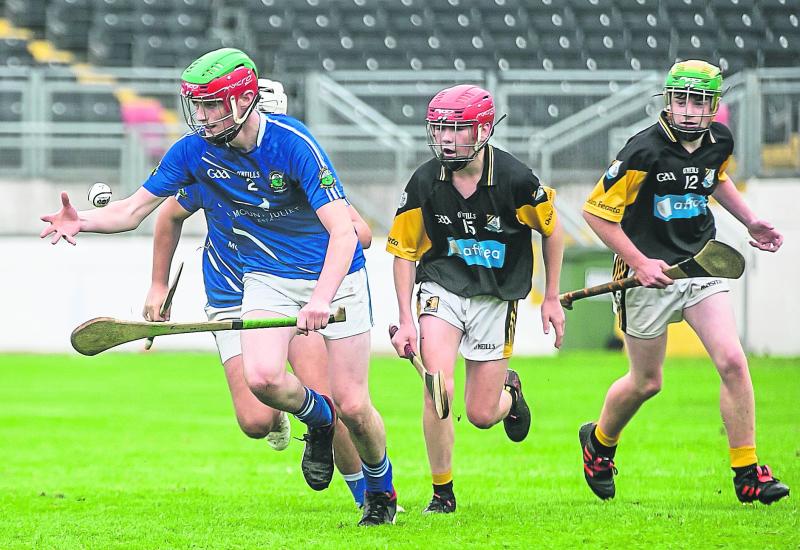 A 52nd minute goal from full-forward and top finisher, Jack Holden, proved to be the crucial score in the end as Thomastown charged to a thrilling victory in the Kilkenny minor hurling Roinn B championship final in Nowlan Park.
The ’Town, who had led from the 19th minute, were looking a mite unsure when game Danesfort put a strong scoring blast of 1-2 together to cut the gap to 2-12 to 2-10 with nine minutes remaining in Sunday’s hard fought decider.
Then Holden struck, claiming a clearance from driving centre-back, Eddie Donnelly, around the 20 metre line.
Holden charged on a short solo run and flicking the ball into the net at full stretch from about six metres.
Mountain to climb
With the Thomastown lead suddenly back to a healthy enough 3-12 to 2-10 there was a mountain in front of Danesfort as they chased their first win at this level.
Credit to the losers, they gave it a good shot. They out-scored the opposition by three points to one during the hell for leather closing stages.
But Thomastown held on to claim their first win at Roinn B level and first at minor level since they won their sixth and last Roinn A championship way back in 1981.
There was nothing between the teams during the early stages when four points were equally shared as Danesfort attacked the country end.
Hit the front
Thomastown hit the front in the tenth minute when Joe Conlon hit the target after making a good catch.
Holden added the next score, a point from 45 metres, after battling really hard to win possession, to take them 0-4 to 0-2 ahead.
However, on 14 minutes Danesfort pieced together a lovely move which ended in a goal.
Aidan McGree started the move. Brain McDonald continued it before passing the ball to the driving Peter Donohue, who squeezed the ball between the ’keeper and the near post as he raided from the left (1-2 to 0-4).
Donohue added the next point after being placed by the hugely impressive Adam Byrne, a lineball expert and terrier-like competitor.
Won back lead
The teams swapped four points during the next five minutes - the highlight being a powerful run up and finish from the right wing by Naoise Dempsey - before Thomastown won back the lead.
Jack Holden did well to win a delivery from Liam Treacy, and he drove on forward to drill a left handed shot from the left into the far corner of the net (1-6 to 1-4).
A point from a 60 metre free by Peter McDonald extended the Thomastown lead as they charged on into an interval lead of 1-8 to 1-6.
Gap smaller
The gap might have been smaller, seeing that Danesfort registered six wides during the half.
The ’Town went close to grabbed a goal in their first raid immediately after the turn, but Holden shot wide. He didn’t miss the next chance, a point, which drew a reply from Tomás Leahy at the other end.
Peter McDonald added to the Danesfort gains as they threatened seriously for a while. However, when they conceded a penalty in the 40th minute, after Naoise Dempsey was wrestled to the ground, and Peter McDonald rifled the free shot to the net, the game looked to be going away from them (2-11 to 1-7).
The next two scores were shared before Danesfort hit their purple patch.
After Jamie Phelan (free) and Joe Conlon, an eye-catching effort from 70 metres, swapped scores the ’Fort nicked two points from frees by Phelan before Aidan McGree earned a penalty after a determined charge into the big square ended with him being fouled.
Peter Donohoe scored a goal. The gap was back to 2-12 to 2-10.
Contest open
The contest was wide open, or so it appeared.
The ’Town stood their ground. Donnelly launched a straight down the middle attack in the 52nd minute, and the tall Holden made his height and strength pay as he first won possession and then burrowed his way through for the crucial goal (3-12 to 2-10).
The ’Town had capital performers right through the spine of their team.
Together they had a serious influence on things, with Eddie Donnelly, Liam Treacy, Peter McDonald, Jack Cahill and Jack Holden, along with Cian McCormack, their top performers.
Danesfort may have conceded a lot to the opposition in terms of physique, but the heart of the team was very strong.
Their best players were Adam Byrne, Peter Donohue, Páraic Barragry, Joe Cowhig, Tomás Leahy and Jamie Phelan.
SCORERS
Thomastown - Jack Holden (2-4, two points frees); Peter McDonald (1-6, goal penalty, four points frees, one 65); Joe Conlon (0-2); Naoise Dempsey (0-1).
Danesfort - Peter Donohoe (2-2, goal penalty, one point free); Jamie Phelan (0-7, frees); Tomás Leahy, Cillian Norton, Ciarán Mullen, Eugene Sinnott (0-1 each).
Thomastown - Diarmuid Galway; Conor Coady, Ben Tennyson, Fintan Brennan; Cian Moore, Eddie Donnelly, Jack Skehan; Liam Treacy, Peter McDonald; Luke Connellan, Jack Cahill, Joe Conlon; Naoise Dempsey, Jack Holden, Cian McCormack.
Subs - Peter Connellan, Zach Bay Hammond.
Danesfort - Darragh Hackett; Cathal Norton, Dan Dowling, Joe Cowhig; Steven Doheny, Aidan McGree, Páraic Barragry; Tomás Leahy, Adam Byrne; Jamie Phelan, Peter Donohoe, Ciarán Mullen; Ian Wallace, Cillian Norton, Brian McDonald. Sub - Eugene Sinnott.
Referee - Jim Fitzgerald (Piltown).