All dressed up - but then, it's All-Stars night! 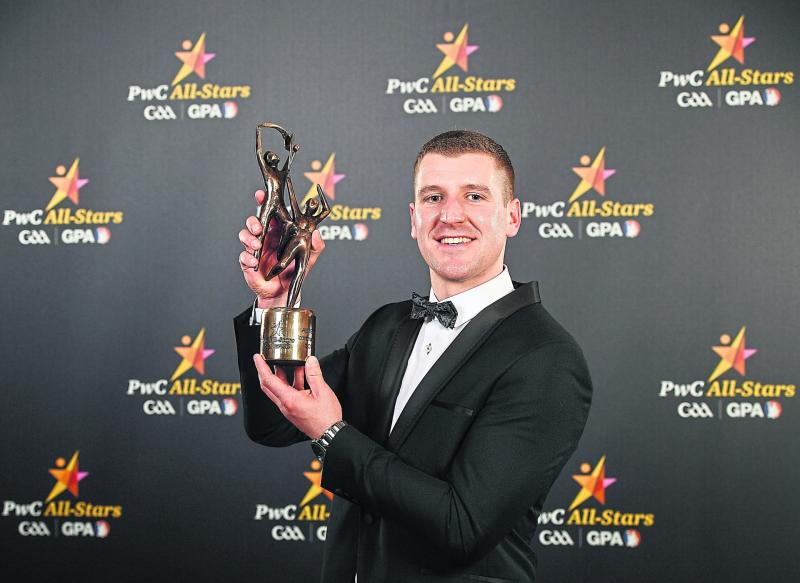 Dateline: the Hilton Gardens Hotel, Spencer Dock, Dublin 1. Last Friday.
5.30pm: I am suited, booted and reeking of Chanel Blue. I have a choice of three dickie bows to wear. I am on my way to the PWC GAA/GPA All-Stars awards night and I am dressed (and scented) to kill. Clooney would cry with jealousy if he could see me.
And lo, there is my hot date in the lobby of the Hilton Gardens. A tall, attractive redhead, resplendent in black and white. Yes, it is Hugh Hynes!
Readers who lurked on the Clarehurlers.com chatroom back in the noughties will remember Hugh, who posted under the nom de plume of Shannonsider. For many years now I’d been planning to bring Hugh, who is racy of the soil and who loves his horses and greyhounds as much as he does his hurling, to the All-Stars as my Plus One. This year, just as I’d been starting to give up hope, Limerick finally went and won the All-Ireland.
He decides which of the three dickie bows looks best on me: the pink checky one. He dons his own dickie bow. The pair of us toddle down the quays towards the Convention Centre. The night has begun.
Shooting the Breeze
6.15pm: We are ensconced on a sofa on Level 3 of the Convention Centre, chugging warm prosecco and shooting the breeze with whoever happens by. One happener-by is former GAA president Seán Kelly. Two more are Seamus Harnedy’s parents. Seán Harnedy is a great and garrulous character from east Cork who, on hearing where I’m from, announces that only the previous day he’d bought cattle from a dealer from Kilkenny.
In return, can I, a selector, tell him whether Seamus has made the All-Stars team? I can’t, but I can give Seán a wink and I do. He winks back.
8pm: So that’s the All-Stars hurling XV for 2018. A few complaints ensue that, being compromised, I probably should pass over in silence. Everyone’s entitled to an opinion and the All-Stars wouldn’t be the All-Stars without a healthy dollop of faux-outrage. Still, a couple of quick observations.
It is not remotely illogical that Kyle Hayes was named Young Hurler of the Year but didn’t make the All-Stars team, and not only because the former was chosen by the players and the latter by the media. Beating a group of contemporaries, many of whom are not forwards, to be named Young Hurler of the Year doesn’t automatically render a player one of the best six forwards in the country. Clear enough, surely.
Hard-Luck stories
T.J. Reid was unfortunate not to make the cut. As was Tom Morrissey, as was Daniel Kearney. It is not breaking the seal of the confessional to say that five of the forwards picked themselves (Harnedy, Canning, Duggan, Conlon and Mulcahy) and five more were in contention for the last berth. An inevitable byproduct of the All-Stars selection process is that one or two worthy candidates are squeezed out each year. In 2018, a vintage Summer for attacking play and scoring forwards, a couple of hard-luck stories were guaranteed.
In any case, if Limerick folk themselves couldn’t decide which of Morrissey, Hayes and Aaron Gillane was the most deserving of a statuette, and judging by the reaction on social media they couldn’t, then the selectors had no reason to feel guilty. We chose a team that contained 13 – if not 14 – players whose presence provoked no arguments. In other words, we did our job.
9pm: Hugh and I depart the auditorium and find our table in the vast room on the ground floor. Sean Ban Breathnach and RTE’s Brian Carthy, complete with respective daughters, are among the company. Hugh chats away as though he’s known everyone all his life.
9.30pm: Dinner. Pressed Chicken Apricot Terrine. Beef Fillet, Toulouse Sausage Bourguignon, Champ Mash Potato. Chocolate Cremeaux Irish Sea Salted Caramel Delice.
11pm: I’ve long been of the theory that every GAA person in the country should get to go to the All-Stars – but only once. Once is enough. You’re part of the night. You can study the fashion if you’re a female or gawk at the eye candy if you’re not. You’ll see Marty work his magic. You may even recognise a few of the players.
Since the banquet moved from Citywest, however, the intimacy has been lost. The Convention Centre is too big and echoey and 1,400 guests constitutes an uncomfortably large gathering. Between us, Hugh and I barely spotted a Limerick player the other night. They may have been on the far side of the room. They may as well have been on the far side of the moon.
1.15am: Being too old and boring to stay on to the bitter end, we call it a night. We’re wandering back up the quays when we run into Kilkenny’s greatest living Kerryman, Christy Walsh, accompanied by the lovely Mrs Walsh. I do the introductions and immediately Christy and Hugh are chatting away about coursing in north Kerry, coursing in west Limerick, hurling in Kilmoyley and a vast number of mutual acquaintances.
2am: Bed. I’ll do it all over again next year. Or perhaps not.