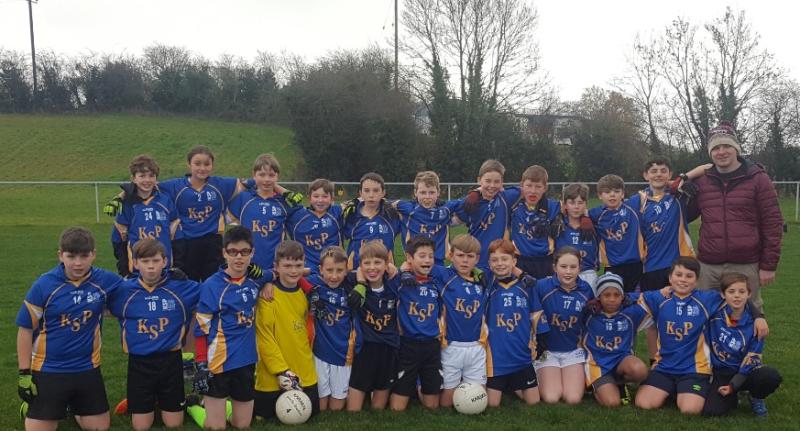 Ireland’s historic rugby win over the All Blacks wasn’t the only piece of sporting history made in recent times.
At the MW Hire Training Centre, Dunmore, the talented boys and girls from the Kilkenny School Project made their own history when taking their first ever title in the Allianz Cumann na mBunscoileanna football championship.
They scored an exciting three point win over a gallant Windgap team in the Toymaster Roinn C final.
Having contested three finals in-a-row in the mid noughties, it was fourth time lucky for the Waterford Road school.
They held out in a gripping finish as Windgap threw the proverbial kitchen sink at them in a bid to find a levelling score.
KSP had early chances to score, but it was Windgap who opened the scoring.
On three minutes Padraig Egan’s long ball in bounced hard on the solid ground in front of the KSP goal and cleared the crossbar.
The KSP response was emphatic.
Dangerous Ball
Marlon Millie drove up the left wing and pumped a dangerous ball across in front of goal for Yazeed Zouauoi to palm home.
Within a minute the same player added a point when kicking a great free from 30 metres. The action flowed from end to end of the pitch and the commitment was total.
On nine minutes the sides were level. Eoin O’Shea crossed into the square and Aidan O’Shea was quickest to react. He fired a low shot to the net.
Both sides were creating chances and Padraig Egan (W) and Mark Askins (KSP) traded minor scores.
KSP then hit a purple patch and they applied strong pressure on the Windgap defence.
Mark Askins shot two quick points, the first one flashing just over the bar. At the break KSP led by 1-4 to 1-2.
The close nature of the exchanges continued in the second half.
Windgap, chasing the game with all their might, put serious pressure on the KSP defence. After five minutes they reduced the gap to the minimum when Darragh Doyle played a lovely one-two before fired over a point.
The danger signs were there as KSP looked threatening on the break.
Not long afterwards they grabbed two goals in as many minutes. First a lovely team move saw Cian Byrne place Yazeed Zouauoi, who fired home his second goal.
Then the impressive Mark Askins blasted home a shot off the ground as the Windgap defence scrambled to cover.
Between the goals, Jethro Duffin pulled off a brilliant double save in the KSP goal. Many teams would have buckled, but not Windgap.
On 17 minutes Padraig Egan found Jenny Saunders, who side-stepped a would be tackler to bag a goal. Egan then shot another fine point.
With five minutes left a goal separated the sides. Press as they might, Windgap could not break down a resolute KSP defence.
The losers survived a few scary moments, especially when the speedy Marlon Millie threatened on the counter.
Windgap forced three 45s nearing the end, but each attack was beaten off.
KSP celebrated wildly when captain Louis Fitzgerald raised the Roinn C Cup aloft.
There were heroes aplenty on both sides, with Millie Gilsenan, Louis Fitzgerald, Zalan Lesznek, Mark Askins, Yazeed Zouauoi and Marlon Millie best for KSP.
For Windgap, Clara O’Shea, Darragh Doyle, Padraig Egan, Eoin O’Shea, Cian O’Rourke, Eleanor Hayes and the tigerish Jack Egan showed up well.
Kilkenny School Project - Jethro Duffin, Millie Gilsenan, Eddie Daly, Bill Hayes, M.J. Maher, Louis Fitzgerald (capt), Zalan Lesznek, Louis Mackin, Mark Askins (1-3, one point free), Oscar Downer, Cian Byrne, Yazeed Zouauoi (2-1, point free), Marlon Millie. Subs: Ted Donohue, Aaron Doyle, Alex Pryor, Cayden Byrne, Ellie Sullivan, Max Marc, Enye Epsei Boston, Lewis Keneally, Amir Zouaoui, Morgan O’Toole, Enda McLoughlin.
Windgap - Michael Saunders, Jack Egan, Alex Culleton, Clara O’Shea, Darragh Houlihan, Darragh Doyle (0-1), Padraig Egan (0-2), Eoin O’Shea (0-1), Jenny Saunders (1-0), Eleanor Hayes, Cian O’Rourke (capt), Darragh Enright, Aidan O’Shea (1-0). Subs: Hugo Seagrave, Sam Moloney, Frankie Dullard, Alyn Hearne, Joe Moloney, Killian Weldon, Jack Murray, Leon Ozarowski.
Referee - John Manogue (Thomastown).