Happy man Bob (40) delighted to soldier on with Shamrocks 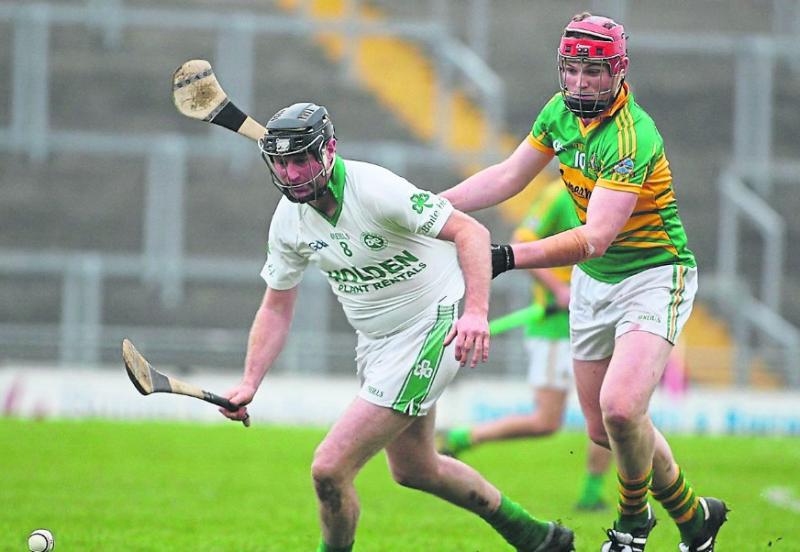 Long serving Ballyhale Shamrocks defender, Bob Aylward, turned 40 in May.
He reckoned he will bring down the curtain on what has been a most satisfying senior career to date whenever this campaign ends.
But that’s the question. When?
Kilkenny champions Shamrocks, being Shamrocks, are chasing silverware again.
In his first year as manager, 10 times All-Ireland senior medal winner, Henry Shefflin, guided his beloved club to their 16th senior championship success.
On Sunday the Southerners face Ballyboden St Enda’s (Dublin) in the Leinster club senior hurling final in Netwatch Cullen Park (2pm), with minds trained on a ninth title.
Aylward knows the story, the thinking. He has mined a fantastic seven senior championships with the club; three All-Irelands and four Leinster championships.
Another one would do nicely.
“We are all looking forward to the Leinster final. A final, any final, is something to get excited about,” insisted Bob, a loyal servant who can look back as far as when Shamrocks were an intermediate club.
“It is a nice one to get back into after being away for four years,” he insisted.
Four years - a long time in the life of Shamrocks.
The club was founded in 1972 and struck gold immediately, winning the junior championship in 1973. Their first intermediate success followed (1974) before a subsequent slip back down from senior led to another intermediate success in 1997.
It has been top flight life all the way since. And Aylward has been part of the enthralling story.
He partnered former Kilkenny star, Sean Fennelly in midfield on the team of 1997.
The year before he won an All-Ireland colleges senior championship with St Kieran’s College.
The picture in the rear view mirror of life fills him with wonder even now: “We achieved so much. We have been blessed.
“At the start of my career I came in as Shamrocks went down to intermediate. We spent a year there and I played in midfield with Sean Fennelly when we went up senior.
Struggled
“From that 1997 win we won nothing until 2006. We struggled for a few years in the early part of the new century. I never expected to win all we did, and I learned to take things as they came. Each season is different.”
Even 2018: “This has been a good year so far; a great year.”
The foreman with Suir Engineering witnessed a new team take shape. He saw game time in the county final against Bennettsbridge, but mostly he has been looking with admiration from the bench as the new generation took over.
“That is a great thing,” Bob insisted. “A new generation of player is carrying on the tradition of the Shamrocks. We have great young lads coming in.”
He admitted it wasn’t easy at times to keep up with the young thoroughbreds during training, but he feels he has something to offer, he feels part of the group and he is enjoying life.
“I have been blessed with my career,” he offered again. “I never had any serious injury. The only injury I had was my back. I damaged it a few times but it never kept me down.”
A ferociously competitive spirit and love of the game kept him going. He recalled when he was a youngsters on the family farm heading out for the cows with a hurley in hand.
Then when March of each year arrived it was pucking the sliotar off the side of the house, perfecting the skills and at the same time driving the father and mother mad.
“That was a big part of our childhood,” he recalled. “Life was innocent, but brilliant.”
Bob and his wife, Lisa have three children - Dylan (20 last week), Leah (13) and Taylor May (10).
Next generation
The next generation is stepping up. Dylan is on the Shamrocks under-21 team and is part of Sunday’s squad too.
Father and son have played at junior level together, but never at senior. Maybe before the end of the season.
“I will be concentrating more on the junior next year, and will pull away from the senior,” Bob revealed.
The attachment is still huge. Every training session under Tommy Shefflin (Henry’s brother) and Richie O’Neill is different because they change things around.
There is a lot of ball work, short sprints and even more banter and craic.
Shamrocks are entering a new era. Bob was part of the Shefflin, Cummins, Fitzpatrick, Walsh, Reid and so on cycle.
“We were a different generation to say the Fennellys’ before that,” he pointed out.
A new group
“Now we have a new group again; young Evan Shefflin, the Mullens’, Dylan, my own son. There is great bunch of lads there. Brian Butler, who is still young at 22. You have Dean Mason (18).
“There is a great mix of players there.”
Shamrocks enjoyed a relatively easy passage into the final, walking through Naomh Éanna (Wexford), albeit after an unsteady start, while Ballyboden battled through two periods of additional time before seeing off Coolderry (Offaly).
“They are good. They will take beating,” he said of Sunday’s opposition.
“Our team is good too. The young players should have trust in their own talent. They have a lot to offer, against any opposition.
“You can never tell with game like this, but I know Shamrocks. They won’t surrender!”
Sunday - Leinster club senior hurling final in Netwatch Cullen Park (2pm), Ballyhale Shamrocks v Ballyboden St Enda’s.
Ballyhale Shamrocks squad - Dean Mason, Conor Walsh, Joey Holden, Brian Butler, Evan Shefflin, Michael Fennelly (captain), Darren Mullen, Ronan Corcoran, Richie Reid, Brian Cody, T.J. Reid, Eoin Cody, Eoin Reid, Colin Fennelly, Adrian Mullen, James Connolly, Bob Aylward, Kevin Mullen, Conor Phelan, Eugene Aylward, Gavin Butler, Paddy Mullen, Joey Cuddihy, Mark Aylward, Dylan Aylward, Darragh Corcoran, Mark Gorman, Eoin Kenneally, Patrick Hearne, Martin Davis.