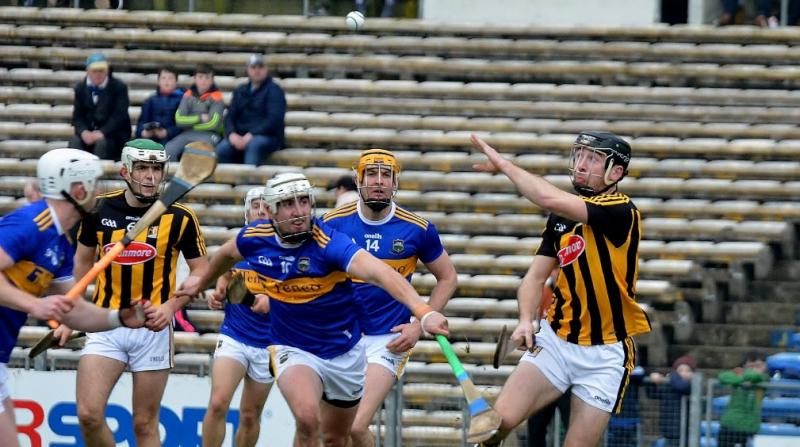 Conor Delaney (right) turned in a big performance for Kilkenny

Kilkenny’s stirring victory over Tipperary in the National Hurling League on Sunday didn’t come as a big surprise to team boss, Brian Cody.
It was a tough and uncompromising game that could have gone either way, but the long standing official said the visitors worked hard for what they got.

Kilkenny won by 0-18 to 0-17, two late points from frees by star goalie Eoin Murphy, the second in the 73rd minute, helping to shoot them over the line.
“It was a hard fought game all through,” insisted a pleased Cody afterwards. “We were decent right through, but particularly during the opening 20 minutes when we were moving well.
“Tipperary took the lead at a vital time in the second half. It was going to be difficult for us to respond to that, but the lads kept at it well. It was a good win.”
The last and deciding free was awarded when Tipperary centre-back, Padraic Maher was judged to have touched the ball on the ground.
Great effort
“It is not a normal thing to happen,” Cody said when questioned on the matter. “But a free is a free. Eoin (Murphy) hit the last couple of frees very, very well. It was a great effort to win a fine game.”
Both sides missed frees during the match, which added to the excitement of the whole affair, Cody suggested.
“Overall it was a good response from us after last Sunday,” he said in reference to the bad defeat suffered against All-Ireland champions, Limerick.
“We conceded two goals in the space of a minute just before half-time and shortly after half-time we conceded to Limerick as well,” he continued. “We responded well to that setback.
Did reasonably well
“I always felt we had done reasonably well last Sunday. I didn’t see it as anything other than a game we learned from. We conceded goals that were preventable.
“I had confidence in the sense that we were doing decent and we were competitive.”
When asked about Kilkenny going over 20 minutes of the second half without scoring he said these things happen, but during that time they missed opportunities.
“We created but didn’t take them,” he replied. “That sort of thing happens. You can’t let that get to you. You have to keep going. We turned things around fairly well and finished strongly.”
When pressed on the impressive showing of full-back, Conor Delaney he said the Erin’s Own (Castlecomer) man was a very, very good player.
“He has played a lot at full-back during his career,” he continued. “He is very comfortable at half-back as well. It was a great test for him facing the player he was up against. Conor did very well.”
He said thing were tight in the League in general, and all counties would go into the last round of matches wanting to win.
“We are playing Wexford in Wexford,” he reminded. “Both will want to win. It is going to be difficult.
“The League is fierce competitive. The teams that didn’t win today can get up a bit as well if they do well next weekend.”