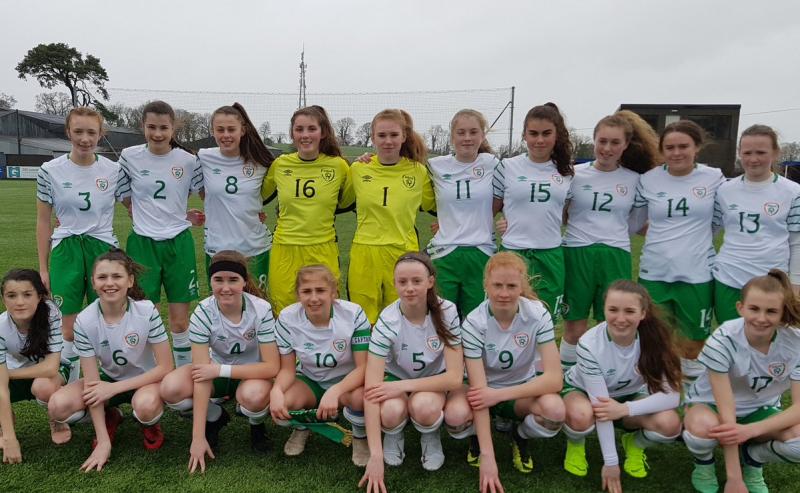 Three Kilkenny girls, including captain Ellen Molloy (number 10), will play for the FAI Schools Under-15 Girls’ Republic of Ireland squad at the Bob Docherty Cup

A Kilkenny trio are getting set to jet off into international action this week.

Ellen Molloy, Freya de Mange and Amy Clifford will be part of the FAI Schools Under-15 Girls’ Republic of Ireland squad who fly to Salou this weekend to compete in the SAFIB Bob Docherty Cup.

The international programme will now see a sixth team compete with Gibraltar added to the mix. It’s the first year they will compete given the close proximity to the host venue and a welcome addition for the other competing Nations.

The squad will meet up in Dublin on Saturday evening ahead of an early departure to Barcelona on Sunday morning as the action kicks off Monday afternoon.

The three day tournament will see Scotland up first for Richard Berkeley’s crew while they will compete for the John Read Trophy against England on the Tuesday as well as attempting to progress in the International campaign.

The team will be captained by Molloy and sees De Mange join the squad as a late replacement for the injured Nicola McNamara. De Mange, an apt replacement, has been in superb form of late assisting her school to National Cup glory in the Junior Cup recently. A physical player, who has set pieces as her speciality, she will do well for the scholars next week when called upon.

Captain Ellen Molloy enjoyed Bob Docherty Cup success a year ago in Jordanstown and is looking to replicate her form. The scholars celebrated the double, capturing the John Read Trophy in Stafford Town in March 2018. The Kilkenny grad scored a brace in that game to secure the silverware.

The Republic of Ireland will be attempting to defend their title having had such a wonderful campaign last year in Ulster University. They notched up 11 goals in 3 games, only conceding once. The Irish overcame Scotland 0-5 in their opening match while Northern Ireland ‘B’ went down 0-4 to Berkeley’s side which lined up a grand finale with England. The Irish managed to claim the prestigious title with a hard fought 2-1 victory.

The Republic of Ireland had last won the title in 2010 with runners up spot claimed in the three previous seasons so the victory at this level was long awaited. The class of 2019 will be hoping to impress in the sun with another double success for the Irish students.

Scotland vs Republic of Ireland

Republic of Ireland vs England

Draw to be made following match day 2