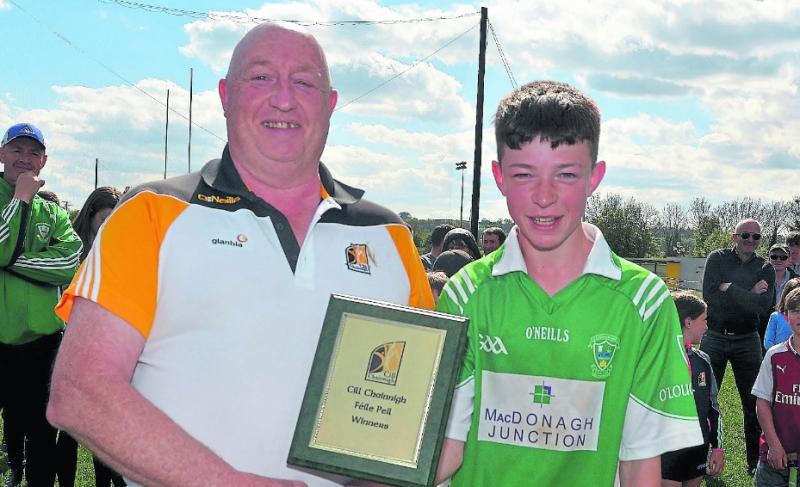 The last few games in the Kilkenny minor hurling leagues were played off before the traditional break for examinations.
Roinn C was where all the action was. In Pairc Sheamuis Stiophan, the home side made use of home advantage to come out on top by 4-9 to 2-11 over a game St Patrick’s side who will rue missed chances.
In the all southern derby in Kilmacow, the home side took on Ballyhale Shamrocks. They edged out a 1-9 to 0-4 half time lead thanks to some fine scores from Jack O’Neill and Ted Doyle.
A number of missed chances by Ballyhale proved costly as Doyle added on points to ease Kilmacow to a 3-18 to 0-8 victory.
Come championship time, if this pair meet, there won’t be much between them.
In the other group a young Emeralds (Urlingford) side continued their fine surge at underage level.
Killian Doyle and Alex Bourke were particularly prominent as they edged out Slieverue by 0-19 to 2-12.
Bit to spare
On Friday Dicksboro had a bit to spare over the Harps.
There were a number of key clashes in the under-15 hurling league.
O’Loughlin Gaels couldn’t get in front of Naas despite the fine displays of Harry O’Grady and Alex Sheridan as they lost out to the Kildare side by 0-20 to 2-12.
In Gowran, Young Irelands and Mount Leinster Rangers were involved in a rip-roaring tie in which the interventions of Killian Carey, Sean Fitzpatrick and Bobby Brennan saw the home side emerge winners by 4-13 to 2-13.
A potential top of the table clash in Roinn B saw Emeralds take on a youthful St Martin’s side.
From the get go the men clad in green made their experience tell with Alex Burke and Darragh Queally goaling in the first half.
In fairness to Martin’s, they didn’t shirk the challenge. Over half the team played an under-13 final 48 hours earlier, and here Conor Dooley and Cathal Keegan showed real promise.
In the other game in the group Tullogher Rosbercon’s season gathered momentum as Danny Glennon led the way in their 2-10 to 0-9 victory over Bennettsbridge.
Graignamanagh proved too strong for a Glenmore team who were missing a few regulars in a Roinn B League fixture.
An early goal from Sean Hamilton settled the visitors, who then added a number of points during the first half.
A goal from each of Conor Byrne and Mike Hoban brought the half time score to 3-5 to nil.
Mullinavat and the Rower Inistioge didn’t give an inch in their clash in Inistioge where Peter McDonald and Shane Aylward proved inspirational in their 3-12 to 2-11 victory.
The final game of the week was a seven goal thriller. Here the efforts of Joe Fitzpatrick and Cathal Walsh were enough for Dunnamaggin to win by 5-10 to 2-10, despite the fine form of James Purcell and Callum Lonergan for the opposition.