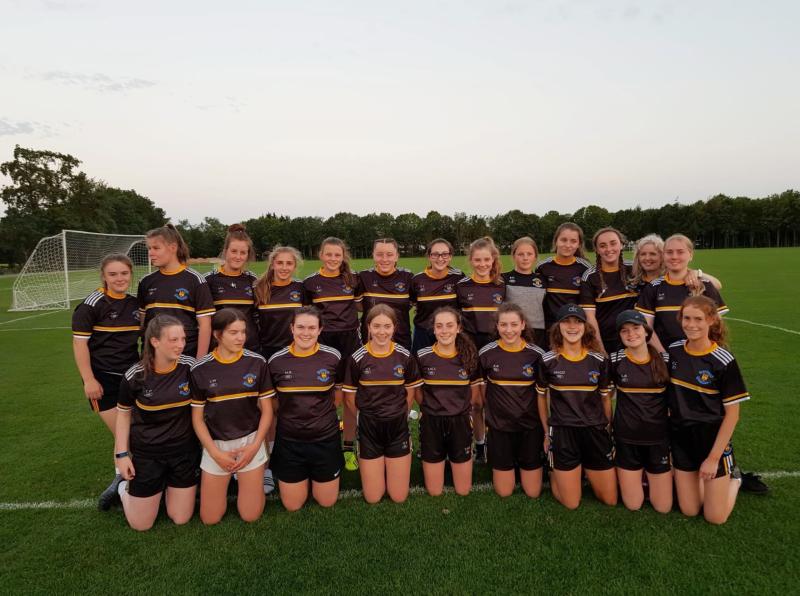 Kilkenny's Gaynor Cup team, who won the Plate competition at the University of Limerick

It was an adventure filled with twists and turns, but Kilkenny were all smiles as they ended their Gaynor Cup adventure with some silverware.

After a rollercoaster week, the Kittens held their nerve when it mattered and made sure of Plate glory when they beat Dublin’s MGL South on penalties on Sunday.

Vice-captain Chiara Cardillio hammered home the decisive kick as Kilkenny won 5-3 in the shootout after finishing the final locked on a goal apiece.

“It was a great way to finish a week the girls will never forget,” beamed proud joint manager Fran Egan.

It was a fitting end for the team who battled their way through a series of tough games in the under-15 inter-league competition at the University of Limerick.

Kilkenny started their week on the right foot, beating Mayo 2-0 in their opening game of Group Four.

Playing a new opponent and in longer match format - games were now 35 minutes a side - it was no surprise to see the Cats play a cagey first half. They threw off the shackles in the second half, grabbing the win thanks to goals from Ellen Molloy and Niamh O’Keeffe.

The rest of the group stage didn’t go as well for Kilkenny, who slipped to defeat against Galway (3-0) and North Tipperary (2-1). The latter loss was harsh on the team, who fought back from going a goal down thanks to a Niamh O’Keeffe header only to concede again with almost the last kick of the game.

Facing into a Plate semi-final with Inishowen, the girls were determined to go for it.

“With the results and the loss of Ellen Molloy to injury the team were a bit down,” said Egan. “Perhaps they felt the pressure after winning last year’s tournament but, as the week went on, they began to relax.

“While the Cup didn’t go our way they just decided to get on with it,” he said of the squad. “They were determined to come home with something to show for their efforts.”

Kilkenny roared their way into the final, beating their Ulster opponents 3-1 thanks to goals from Aine Rohan (2) and O’Keeffe.

That put them through to the final with MGL. Another tight game finished all square, Rohan scoring for Kilkenny, before the side showed their clinical touch in the penalty shootout. Skipper Amy Clifford, Niamh O’Keeffe, Freya De Mange, Síofra Ní Cassaide and Chiara Cardillio made no mistake from the spot, handing Kilkenny a 5-3 win and the Plate title.

“It was a good way to end what has been a long campaign,” said Egan. “This year we had to qualify for the Gaynor Cup which meant we had a series of games across the year. There was a lot of travelling involved, while pressure to qualify for the tournament meant you had to hit the ground running.”

Egan was proud of the squad, who came through a series of tough tests.

“The warm weather and longer games made it tough but the players stepped up,” he said. “We rotated the squad, so everyone got game time and played their part.”

Plans to increase the power of the girls game will continue in Kilkenny, with some exciting ventures in the pipeline.

“With five of this squad eligible again for 2020 we will have a big rebuilding process, but we’re hoping the bulk of this team will push on from here” added Egan. “We’re hoping to bring a lot of this side through to National League level as Carlow Kilkenny have applied to enter a team in the under-17 section next year.”