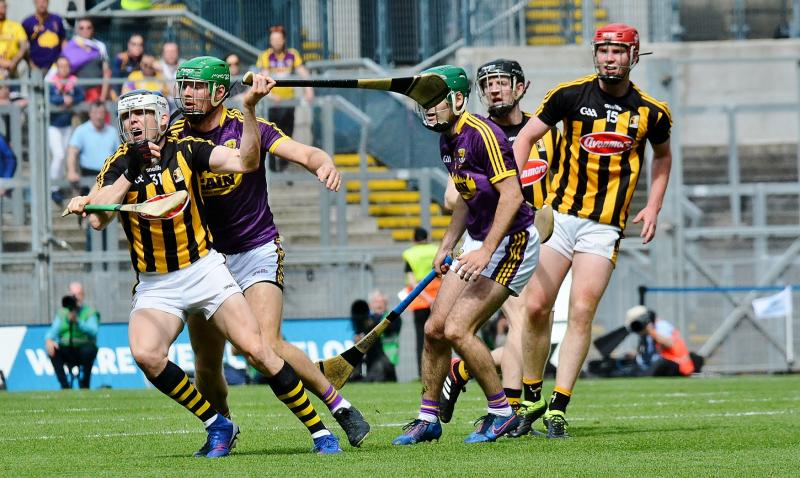 TJ Reid was the top scorer for Kilkenny

Kilkenny needed a big performance and they got one. This was their most impressive turn in the championship arena since that sweltering, nerve-shredding evening against Waterford in Thurles three years ago.
In the aftermath of the Leinster final Brian Cody needed a big performance. He got one too.
This was his finest hour in the championship arena in a long time. Maybe since the aforementioned Waterford match. Maybe since the 2015 All-Ireland final. Maybe even since the 2014 All-Ireland replay against Tipperary. He hasn’t lost it, y’know.
Against Wexford a fortnight ago Kilkenny had been a little tentative, a little reactive, both on the field and off it. At Croke Park on Sunday they were transformed, both on the field and off it.
Their use of the ball in building attacks from the back was more intelligent. Witness Conor Fogarty’s point after 30 minutes when the underdogs worked the sliotar across the half-back line to isolate the Castlecomer man in space on the right. Witness the cogency and fluency with which they created their incisions in the second half. At times it was like watching the Kilkenny of a decade ago.
The obvious caveat should be pointed out now. For all that the winners hit 2-27, their biggest championship tally in four years, look at the identity of their opponents.
Even the residents of Ulan Bator know that Cork are an open and uncomplicated proposition lacking in tactical bells and whistles, and as such are a far easier team to play against than Wexford were or Limerick will be.
Still, they asked questions, they kept asking them and Kilkenny kept answering them.
Cork had 1-1 on the board inside two minutes. Somehow Kilkenny were three points ahead by the 10th minute.
Cork got their second goal just before half-time. Kilkenny responded with their second goal just after it.
Cork’s full-forward produced a scoring display for the ages. Kilkenny remained firing bullets of their own. Let it be said, moreover, that apart from being beaten in the air for Patrick Horgan’s third goal (and who knows what kind of pressure, undetectable to the spectator, Horgan was applying from behind?), Huw Lawlor did little wrong.
Dazzling Spell
Cork hit 1-3 without reply in a dazzling two-minute spell around the three-quarter mark. Kilkenny regained their composure and saw the game out with a barrage of points.
The latter occurred partly because their management played a terrific 20-man game. Cody has been criticised over the years for being insufficiently proactive with his subs. No such criticism was feasible on Monday morning.
Few people doubted that for all their limitations, if and when Kilkenny were able to field their optimum, injury-free XV this summer they’d be tricky opponents for anyone. Here at last the bench was stacked. Cody wasn’t shy about using it to its fullest.
Far from being a problem, Cillian Buckley’s withdrawal at half-time proved to be a blessing in disguise, providing knock-on effects that were uniformly positive rather than the reverse.
Fogarty lent experience to the half-back line. Switching Richie Leahy to midfield, far more – as you’ve read here only a million times before – of a natural position for him than wing-forward, gave Kilkenny someone who could truffle out the ball there and drive forward with it. Even if his shooting let him down at times, Leahy was influential in the second half. As for rectifying said shooting, if only there were somebody in the Inistioge area – a former intercounty star who, say, was a noted marksman in his own day – who could offer Leahy a few tips…
The introduction of Walter Walsh furnished the Noresiders with another outlet in attack and by way of a bonus Walsh proceeded to land three points. All told, a total of 0-6 was contributed by the subs. Precisely the margin of victory.
Apropos of Richie Hogan, one will merely say that this was the kind of thing that can happen when he’s on the field from the beginning as opposed to the 72nd minute and leave it at that.
For Adrian Mullen, meanwhile, the afternoon was a useful lesson. The Ballyhale youngster, who played a fine ball for Colin Fennelly’s goal, nearly had a really good game. He fell some way short because his decision making in possession wasn’t sharp enough. But in terms of getting his hands on the sliotar and looking to be constructive with it, he ticked the necessary boxes. With a little more experience this 6.5 of a performance would have been an 8.5 or a 9.
A word too about another Ballyhale man. Three years ago Joey Holden endured the All-Ireland final from hell. It was no sure thing he’d bounce back. It was no sure thing he’d want to bounce back, particularly after the manner in which he was hung out to dry against Seamus Callanan.
But bounce back he has. Holden is always there, always giving of his best, always showing for possession, and even if he continues to fumble too much ball he never hides. He is a wholly admirable hurler and a wholly admirable individual.
Come Saturday week Limerick will ask questions that Cork didn’t. More questions. Harder questions. Kilkenny have enjoyed too few high days these past three years, however, for last Sunday’s achievement to be allowed pass without being acknowledged, appreciated or celebrated.