It was a busy weekend for Kilkenny hurling squads 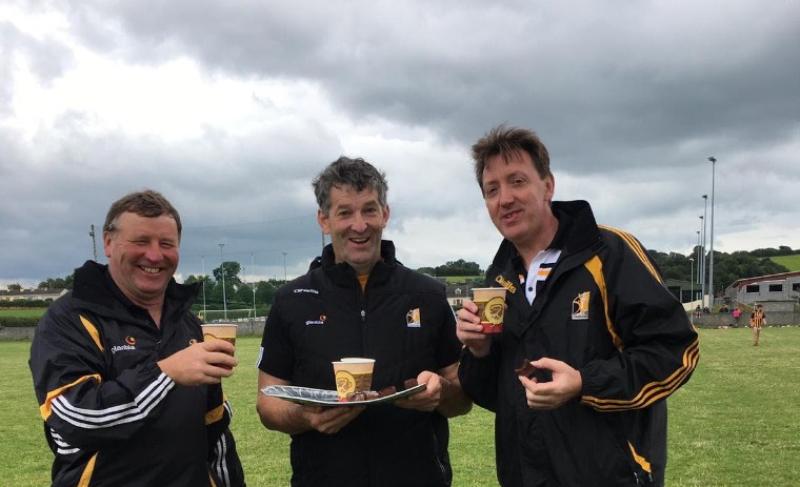 Limerick provided the opposition on Saturday for the under-15 Kilkenny Amber hurling squad in a game that was played at a ferocious pace which fitted nicely with the previous week’s cracking fare in Croke Park.
Limerick raced into the lead as Kilkenny failed to score until the ninth minute. Harry Shine and Danny Glennon got among the scores as the Cats someone got to the short whistle level at 2-7 each thanks to some excellent goalkeeping from Alan Dunphy.
The second half was again at a ding-dong affair with Gearoid Dunne popping over points. However, it was largely the introduction of Ted Dunne that swung the game the Cats way.
The Young Irelands (Gowran) attacker pilfered 2-2 to help chisel out a 4-15 to 5-15 win.
Kilkenny Amber panel - Michael Clarke (Dicksboro), Bill Hughes (Bennettsbridge), Alan Dunphy (Lisdowney), Kieran Cleere (Emeralds), Peter McDonald (Mullinavat), Shane Aylward (Mullinavat), Patrick Langton (Clara), Harry Shine (Dicksboro), Padraigh Naddy (Young Irelands), David Sherman (Galmoy), Alex Burke (Emeralds), Alex Sheridan (O’Loughlin Gaels), Ben Whitty (Danesfort), Danny Glennon (Tullogher Rosbercon), Daragh Queally (Emeralds), Killian Doyle (Emeralds), Killian Carey (Young Irelands), Ted Dunne (Graignamanagh), John Keane (Dicksboro), Killian Corcoran (Ballyhale Shamrocks), Joe Fitzpatrick (Dunnamaggin), Gearoid Dunne (Tullaroan), Sean Moore (Carrickshock), Shane Glynn (James Stephens).
The Kilkenny under-15 Black squad took on Westmeath at well appointed Johnstown on Friday.
The visitors had the better of things in the opening exchanges and plundered two goals before Thomas Sharkey settled the young Kilkenny side with a point followed by similar scores from Gavin Flynn, Sean Keenan and Cian Doheny.
A goal from Joe Healy put them in the box seat as they led at half time by 1-9 to 2-0.
Kilkenny sprung fresh legs from the bench as the half wore on. Mikey Raggett grabbed a goal while Jamie Morrissey and James Walsh helped themselves to points in what was a largely entertaining game in which goalie Billy Garrett made a couple of fine saves as Kilkenny held on for a 5-17 to 4-6 win.
Next up are Tipperary in the tournament qualifier on Saturday.
Kilkenny Black panel - Billy Garret (Fenians), Declan O’Farrell (Dicksboro), Joe Healy (Barrow Rangers), Cathal Keegan (St Martin’s), Lar Murphy (Tullogher Rosbercon), James Walsh (Kilmacow), Mikey Raggett (Dicksboro), Gavin Flynn (Piltown), Thomas Sharkey (Fenians), Niall Holland (Tullaroan), Sean Fitzpatrick (Young Irelands), Harry O’Grady (O’Loughlin Gaels), Mark Holohan (O’Loughlin Gaels), Fintan Gahan (Graignamanagh), Padraig O’Grady (Fenians), Jamie Morrissey (St Martin’s), Kasper Woloczko (Emeralds), Colm Roche (Glenmore), Cian Doheny (St Patrick’s), Tadgh Connolly (Kilmacow), Sean Keenan (Dicksboro), Harry Roche (Cloneen), Thomas Dillon (Tullaroan).
The Kilkenny under-16 Amber squad travelled to Tipperary on Saturday to take on the locals. The first half was a see-saw affair but it was all square at the break, 1-4 to 0-7.
In the second half Tipp pulled away in the dying embers of the game to win by 3-15 to 3-7.
In the second game Galway made full use of the elements to race into a 0-10 to 1-2 half-time lead. Kilkenny put in a storming second half but they came up short, 1-14 to 2-7.
In the last game Cork dug out a victory. Best performers were Naoise Dempsey, Cathal Bernie, Adam O’Connor and Conor Fitzpatrick.
Kilkenny under-16 Amber panel - Ian Ahern, Cathal Beirne , Tom Brennan, Evan Buggy, John Canny, Tommy Coogan, Naoise Dempsey, Nick Doheny, Conor Fitzpatrick, Mark Gunner, Oisin Kelly, Ivan Kelly, Darragh Mason, Sean Maher, Brian Minogue, Cathal Norton, Adam O’Connor Adam, George O’Connor, Rory O’Connor, Sean O’Dwyer, Jimmy O’Neill, Adam O’Sullivan, Charlie Phelan, Ciaran Phelan, Eugene Sinnott.
The Kilkenny under-16 Black team had a good work-out against Limerick in Dunmore on Saturday.
Meanwhile, all roads on Saturday lead to tournament qualifiers. The under-14 group are hosting in Clara; the under-15 squad are in Dr Morris Park whilst the under-16 group are in MW Hire TC Dunmore.
Full details can be viewed on Kilkennygaa.ie with match reports here next week.
There will also be a full preview of the Duggan Steel under-15 championships in the build-up to the first round of games.
If anyone wishes to have a match reports appear in this section they should contact probng.kilkenny@gaa.ie.