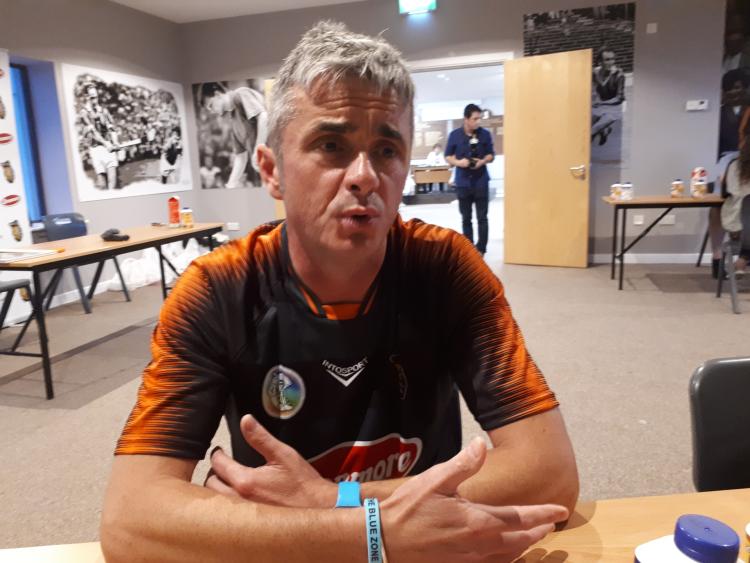 A positive attitude plus togetherness have driven Kilkenny back to Croke Park for another shot at the All-Ireland senior camogie title.
The O’Duffy Cup may have eluded the Cats when contesting the final last year and the year before, but there is no lack of confidence because of those defeats insisted first time selector with the team, Ray Challoner.
The Thomastown man worked with his own club when they won the junior All-Ireland hurling crown in 2013, and he admitted that joining Ann Downey and company with the camogie team has been hugely enjoyable.
“I would have been a supporter of the team,” he said of his path to being a selector. “The mood I have found has been hugely positive. There is no negativity, and I got no ‘feel sorry for me attitude’ because of what has gone before.”
The back-to-back losses to Cork are not something that is spoken about by the players or anyone else, Ray said.
“I would say the girls are incredibly positives,” insisted Ray, who is a physiotherapist who works with various teams. “The heartache is possibly there, but the positivity in the group is what drives them on. To be honest, that is the stand out thing with the group.
“The girls are extremely together. They are a real team. Some girls have been there longer than others, and there are leaders throughout the group. The vibe within the camp is very positive.”
The job now was all about Sunday and opponents Galway. There could be no thinking about the past. It was all about the here and now.
“I am sure this final is not about burying the past,” he continued. “It is about winning this All-Ireland.”
When looking back on the season and a defeat suffered by Galway in the League final he suggested it wasn’t unexpected if, for the simple reason, Kilkenny hadn’t a huge amount of on field training done.
The League campaign -
“Galway were superb, and they thoroughly deserved their win,” he said of that defeat. “We got down to brass tax and worked very hard after that in preparation for the championship.”
In the first match Kilkenny were away to Galway. That was tough. They won by two points.
Next up were Offaly. That tie was physically tough. Kilkenny were at home. They got the win, but didn’t play well.
In the next match against Limerick in Callan, the Noresiders clicked and produced free flowing camogie.
“They let rip,” was the way Ray described the performance. “The girls drove that performance themselves. They made the calls on the field. They all but ran that game themselves.
“They showed what they were all about. They played very well. In the semi-final we were nervous of Tipperary, whose form was very good. In the second Kilkenny began to motor and pick off points.
“They conceded two goals nearing the end, which we weren’t happy about. All the same, we got where we want to get.”
The final, he insisted, was going to be incredibly difficult.
“I don’t get a sense that there is any apprehensive,” he said of the attitude of the girls. “That is not the party line. That is the reality of the situation.
“Galway are exceptional. In saying that, we know we have our star players too. Kilkenny have to think positively. These girls have been at the top in the game for the last few years. They have every right to believe in themselves.
“We will give Galway all the respect in the world, but at the end of the day, these girls are Kilkenny. That brings it own demands. They carry the responsibility well.
“There is a belief in the group. They know what they are about, what the game is about. They are looking forward to getting back to Croke Park. It is all down to 60 minutes now. We have nothing to fear, but we know what we are up against.”