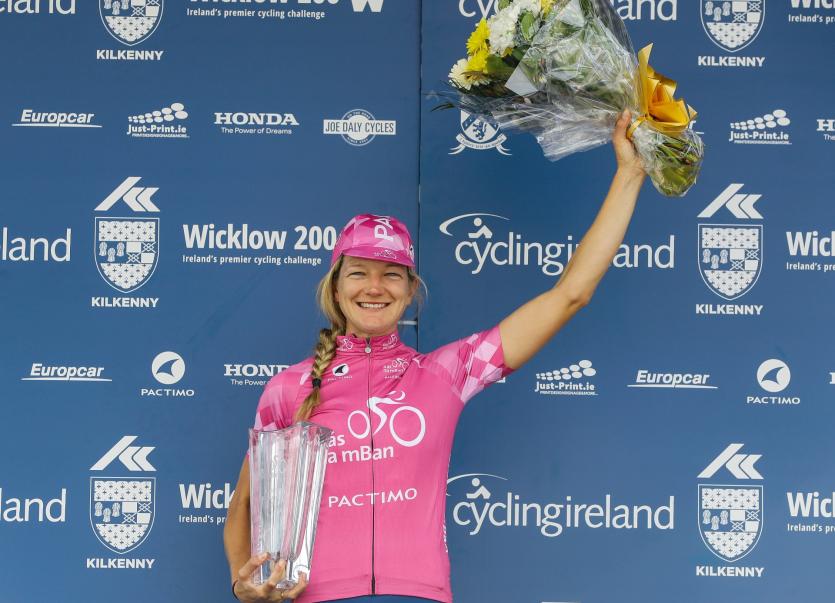 The Brother UK Fusion RT rider was safely in the main group in 20th place one place behind her nearest rival Josie Knight (Team GB) whose audacious final kilometre attack was not enough to distance Steels who retained her six second overall lead to the end.

The top two were in the main peloton behind stage winner Silje Mathisen. The Region TeVeBu rider led Pernille Feldman (Region Sør) and Amalie Lutro (Region Sør) for a remarkable 1-2-3 for Norway.

Team Ireland’s Lara Gillespie was fourth in the final stage and her team-mate Maeve Gallagher was also in the main peloton to complete the week best of the Irish in sixth place overall after the five days of racing in County Kilkenny.

Josie Knight’s consolation for missing out on the overall win was victory in the Points Classification forged with the three stage wins she took in the opening three days.

Knight was also the best Womens Cycling Ireland Young Rider while Natalie Grinczer (Brother UK Fusion RT) successfully defended her lead in the IVCA Wicklow 200 Queen of the Mountains Competition after following her nearest rival Elynor Backstedt (Storey Racing) over the top of the Woodstock Climb in third place.

The stage began with a flurry of activity and a number of attacks from riders keen to make the most of their final opportunity to score record a top result .

Lexi Brown (Team Noord Holland) launched the first attack of the day and she was joined by Connie Hayes of (LIV Awol Spok’d U23) who opened up a gap of more than a minute before the GB national team upped the pace in the main group.

Hayes dropped Brown and ploughed on until she was caught just before the single classified climb of the day at Woodstock where Steels led over the top.

A select group of 12 detached itself from the rest on the climb but the long descent to Thomastown helped to repair the split and the next significant effort came from Natalie Midtsveen of Noord Holland who gained 30 seconds before the bunch stirred into life.

A bunch finish seemed inevitable, though Josie Knight tried one last attempt to wrest the lead from Steels in the final kilometre which was safely controlled by the Brother UK Fusion RT squad which ended the week at the head of the team’s classification.