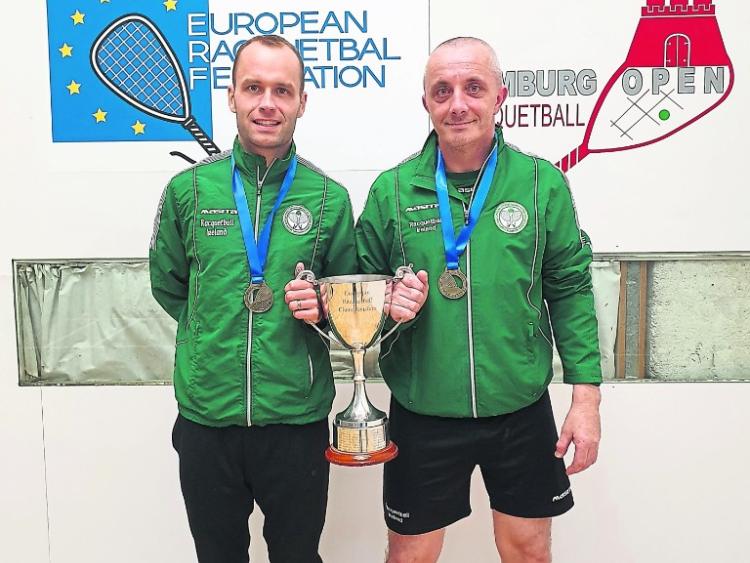 Two of Kilkenny’s top racquetball players were part of the Irish team who scored international glory at the European Racquetball Championships.
The championships, which were held in Hamburg, saw the county represented by Glenmore’s Ken Cottrell and Mark Murphy from Muckalee. Both play with Kilkenny racquetball club in O’Loughlin Gaels.
The Irish team consisted of four men and four women, with two players playing singles and two playing doubles.
Cottrell, who was team captain, played doubles with Johnny O’Keeney from Fermoy. Mark Murphy played number one singles.
The team event got off to a good start for Ireland, who beat the Netherlands and Italy to reach the European final.
Although Ireland were playing a strong German side in the final Murphy beat the German number one to give Ireland the best possible start. The Kilkennyman won this game 15-4, 6-15, 11-10.
With Eoin Tynan from Tipperary beating the German number two and Cottrell winning his doubles game the great run of results ensured Ireland took a 3-0 victory in the final.
The individual event was held over two days. Competing in the Men’s top division and 40+ singles, Cottrell was beaten in the quarter-final of the top division and lost the over 40s in a tiebreak to fellow countryman Tynan.
Success
Murphy had even more success, reaching the top division final in both singles and doubles. Mark lost the doubles final with partner Johnny O’Keeney 15-13 15-13. In the European singles final Mark lost the singles final 15-6, 14-15, 11-6 to bring home a silver medal.
The medal haul came with a bonus for Murphy - he is now ranked the number two player in Europe, highlighting his continued success.
Between the two of them, the duo brought home two gold medals and three silver to Kilkenny. This was a fantastic achievement for both men who represented their county and country with distinction.