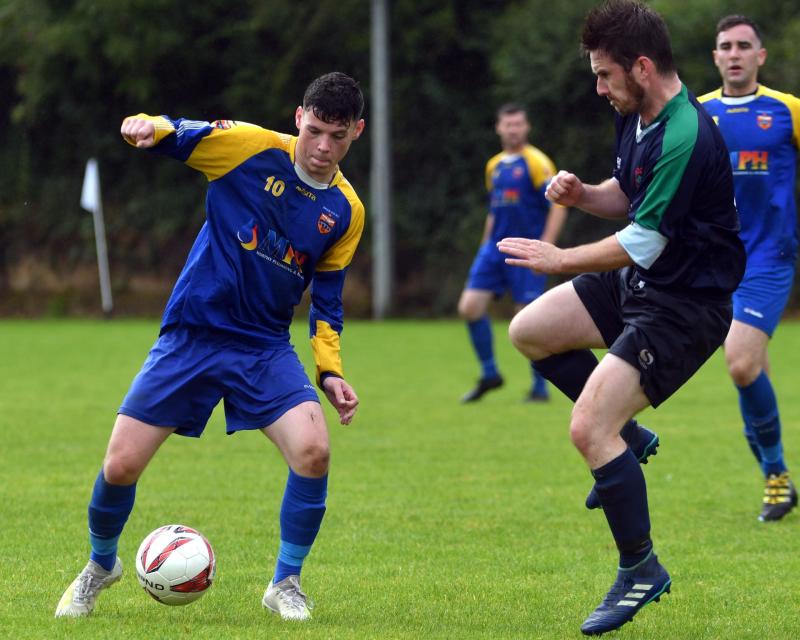 Sean Murphy (Bridge United A) keeps his eye on the ball as Lee Campion (Clover United A) moves in to challenge PICTURE: MICHAEL BROPHY

Freebooters A were big winners at the weekend as they scored a 7-1 win away to Deen Celtic.

Andy Walsh led the way with a brace for the Blues in Castlecomer. Ger Hayes, Jason Hennessy, Jim Ryan, Joe Banville and Leon Hayes were also on target as Booters made a winning start to their Premier Division campaign.

It was a good day also for Bridge United A as they beat Clover United A 3-2.

The Goresbridge side had to do it the hard way, coming from two down after Mark Treacy and Darren Bowe fired the Rathdowney side 2-0 in front after half an hour.

Sean Murphy led the comeback, scoring before the break. Murphy grabbed the equaliser before the hour, Tom Huff following up with what proved to be the winner five minutes later to cap a fine comeback for Bridge.

The Maher Shield was the busiest competition of the weekend, with three games down for decision.

Evergreen A, who knocked out the title holders Highview Athletic, moved into the final four when they cruised past St John's. David Grincell was the star man, scoring four as they beat their fellow city side 7-0 on the Kells Road.

Seven was also a good number for Newpark as they racked up a big score against East End United.

There was a brace apiece for Henry O’Neill and Craig Hayes, while Darren Hayes, Jack Potntz and Shane Denieffe also got their name on the scoresheet in the 7-1 win, a great performance for the boys from the Fen.

Thomastown United also advanced in the Shield, but they had to go the distance to see off a stubborn Freebooters B.

The Blues made a blistering start to their game at United Park, roaring into a 2-0 lead with Glod Londu among the goals, but Thomastown remained calm and fought back into the fray. Robert Skehan pulled one back for the hosts before the break, who drew level when Jack Barcoe made it 2-2 on the hour.

Neither side could find a winner before the end of normal time, forcing the teams to play on. Thomastown's patience paid off, as two goals in as many minutes from Robert Skehan helped them into the quarter-finals - where they'll face Freebooters A!

The only game in Division One ended all square as Ormonde Villa and Evergreen C drew 1-1. In Division Two Highview Athletic B beat Paulstown 06 2-0 while Evergreen 46 were 6-2 winners over Clover United B in Division Three.