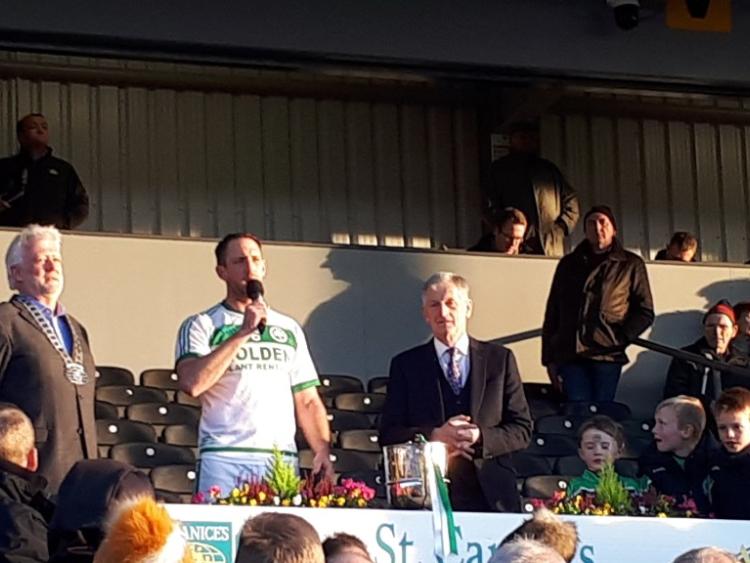 A touch of magic from the gifted TJ Reid, just after he had missed two chances from frees, turned the Kilkenny senior hurling final at UPMC Nowlan Park today and Ballyhale Shamrocks, the defending All-Ireland champions, thundered on to their 17th success.

On 40 minutes Colin Fennelly dug out good possession to the left on midfield, and he shot a short pass to Reid. The Kilkenny captain then stroked a 35 metre, hurley hit pass to Eoin Cody, who scored a goal.

The score took Shamrocks, who were unsure with their finishing up to that, into a commanding lead of 2-12 to 1-9 and James Stephens were in serious, serious trouble afterwards.

In fact, The Village never looked like saving the day.

James Stepehen got off to a dream start when they had the ball in the Shamrocks net after only 90 seconds. Tadhg O’Dwyer nearly ripped a hole in the net at the country end when placed close to the target by Cian Kenny.

Wind backed Shamrocks simply eased into their game. After Colin Fennelly and Eoin Guilfoyle (free) swopped points, the Shamrocks drove on, although their shooting was off.

When Colin Fennelly placed Brian Cody for a Shamrocks goal in the 11th minute they jumped 1-3 to 1-1 ahead.

Still their poor finishing prevented them from opening out a lead worthy of their inventive approach play. By the break they had registered eight wides. TJ Reid accounted for four on his way to seven in all.

The best Shamrocks did during the half was to get five points ahead, which was what they led by at half-time, 1-12 to 1-7.

‘Stephens looked threatening in the opening stages of the new half. Early points from Eoin Guilfoyle (free) and Conor Browne got them to within three of the champions.

It was after that Reid missed two possible chances, but if his touch was off on frees, it wasn’t when he deliver that wonder pass to Cody, who shot the next, match deciding score.