Money is the big, big player in the football world 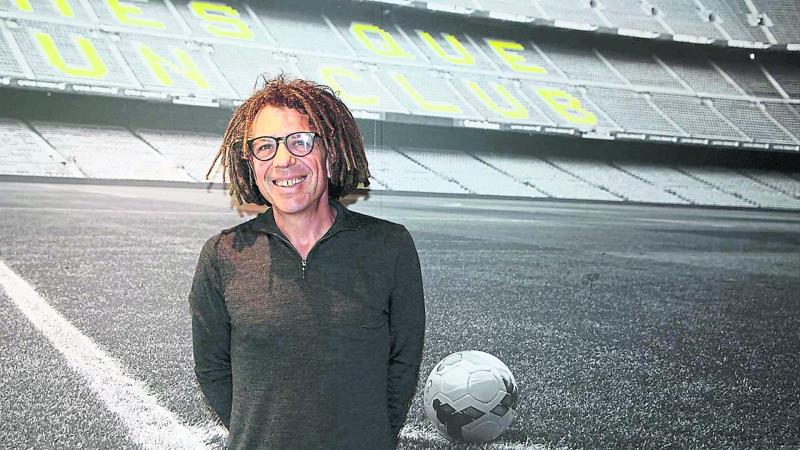 Is China the coming international soccer power? Could the 2022 finals in Qatar represent a tipping point for the World Cup? Which one out of Sepp Blatter, Jack Warner and Chuck Blazer was the most corrupt?
Hello from upstairs in the Hole in the Wall at teatime last Saturday. We’re gathered here for a Kilkenomics gig entitled The Age of Football: the Economics of the Beautiful Game with David Goldblatt.
Goldblatt – lecturer, author, Bristol resident and Tottenham fan – is the world’s foremost authority on the politics and economics of football. This is a man whose book The Ball is Round, a global history of the sport, ran to a door-stopping 992 paperback pages and whose latest effort, The Age of Football: the Global Game in the Twenty-first Century, comprises a mere 688 pages. His notes for the latter opus, when arranged in A4 sheets, measured four metres high.
He is also a man of such diligence that he once spent a day trawling the Twitter accounts of the various presidents of Africa, discovering in the process that two thirds of them follow an English club - Arsenal, Chelsea (Robert Mugabe’s team) and Manchester United being the most popular.
The sport, Goldblatt says, continues to grow, explosively so over the past generation in China, India and the US. “It has become a central element in the popular culture of all these countries.” Watch out for China in particular, he adds. They want to qualify for a World Cup finals; they want to host them (“which they will in the 2030s”); and they want to win the competition. “When the Chinese Communist Party say they’re going to do something, I take them seriously.”
Naturally Goldblatt is an expert on former Fifa president Sepp Blatter and all his dodgy works. How did he get away with it for so long? Goldblatt cites his – yes – charisma: “he has this twinkly eyed, avuncular thing like Bill Clinton.” It certainly worked when Blatter decided to give himself a €20m salary, to which nobody in Fifa objected. One is almost inclined to tip one’s hat to such chutzpah.
Blatter, our speaker elaborates, didn’t actually take bribes; he just allowed everybody else to do so. Chief among them were the late Chuck Blazer from the US, who eventually became a government informant, and the Caribbean’s Jack Warner (“the most corrupt man in global football - and that’s up against some stiff competition”).
The issue of the 2022 World Cup in Qatar, with its brutal heat and appalling casualty rate of migrant workers, features in a question from the floor. “Qatar being involved with PSG and Dubai with Manchester City – to me that’s worse. It means they’re woven into the fabric of the domestic game and that’s more insidious in the long term.”
If Fifa are bad, mind you, the Olympics is a whole other level of sporting degradation. One of Goldblatt’s observations chimes with something I’ve been arguing for a while now. The Olympics. “Totally unreformable. They should just stop it. It’s not doing any good for anyone.”
It’s been a fascinating, globe-girdling discussion, the only blot being Gerry Stembridge’s concept of the duties of a host. At gatherings like this one a good MC should be like a good referee. Unnoticeable and unnoticed, as Karl Spain was when compering a similar gig in Cleere’s at last year’s Kilkenomics.
Sadly Stembridge is neither of these things. He cracks jokes to his own vast amusement, babbles about his memories of the North Koreans in 1966 and interrupts Goldblatt with annoying frequency. Dude: we came to hear him, not you.
The final whistle blown, I collar Goldblatt, break him the dread news of another dismal Spurs performance earlier in the afternoon and mention last week’s reports of a potential takeover of Manchester United by a Saudi Arabian consortium. Now supporters don’t care who owns their club as long as they’re successful, we know that, but surely a ghastly, gay-hating, woman-flogging, journalist-murdering theocracy would be a step too far?
“Good question.” He muses for a moment, noting that Manchester United is now the Glazers’ main source of income as a family business and that they’d be “very loath to give it up”. Then again, those local fans who’d be most likely to noisily oppose a Saudi takeover departed when the Glazers arrived; whatever about the locals, the hundreds of millions of United fans around the world would hardly get overly worked up; and as Goldblatt stresses, “the Premier League would be okay with it. How could they not be?”
A sobering note on which to end an eyeopening evening.