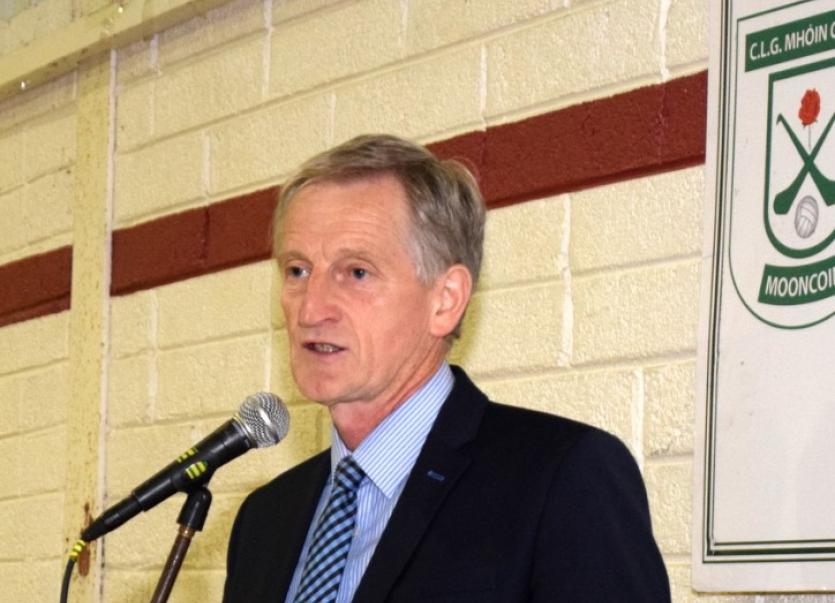 Kilkenny GAA Board is recognised as one of the best run and organised in the country, and it derives huge strength and drive from the sheer passion and pride volunteers bring to the table.
And County Board chairman, Jimmy Walsh, wants to see the status quo retained, where elected volunteers at administrative level continue to rule and work hand-in-hand with the volunteers in clubs.
Don’t want change
“It is an ethos I would not like to see change in Kilkenny as the benefits from full time administrators and financial managers would have to be very exceptional against the costs and culture changes involved,” he said when delivering his annual address to Convention on Monday night.
In a broad ranging address that ran for 27 minutes, the Windgap official said it has been stated that what makes Kilkenny GAA strong is that everyone is a volunteer at all levels.
“With it they bring a passion and deep love of the games that provides the bit between their teeth.
“The county is now a rare breed with the volunteer secretary being the last surviving member of the species that is not supported by a CEO, administrator, senior administrator, personal secretary or an office team.”
He insisted he didn’t care, and expressed the wish that the volunteer would continue to reign in Kilkenny.
He said he believed there was a lack of recognition, support and appreciation at provincial and national level of the key volunteers at club and county level.
There has been no movement on providing greater time saving systems for club or county officials.
The new Players Injury Benefit scheme may be a move in the right direction, he felt.
However, it was not one of the more urgent items where recording challenge games and the communication APP have never got off the ground.
“As a suggestion at county level, counties performing well and meeting high KPIs’ (key performance indicators) should be awarded additional funding,” he suggested in what would be a groundbreaking move.
Then for the club officials, the new home and away championship system offered an opportunity to say thanks too.
He said it would be a good idea to invite some key club officers to an away championship game on what would be a seldom day off as they would be working at the home matches.
Now that things were at the mid-point in the five year term of current officers it was time to prepare and plan for the next wave of officers at all levels, Mr Walsh insisted.
He pointed out that a review of recent annual sub-committees and Conventions representing all schools and clubs showed trends that were disturbing.
Findings
The findings included falling club/school delegate attendances at Cumann na mBunscoil; falling attendances of club delegates at the Handball Convention; less than half the clubs attended the Bord na nÓg annual gathering; and an even smaller number of clubs attended the Junior Board meeting.
“This is not to say the core work is not being done,” he continued. “It is, and being done very well. However, the lack of attendance at meetings leads to a lack of participation, ownership, interaction, problem solving and generating new ideas.
“It most definitely leads to more queries and phone calls as the personnel on the ground are not up to speed in many areas.
“In addition, it removes the first step on the club delegates pathway to become future leaders, club officers and County Board officials.”
He said the observation might appear negative. However, if people were happy to let the situation run, the clubs and county will run out of steam and manpower and then it will be a crisis.
“It is something that we must tackle together, now,” he insisted.
Officers elected - without a contest - were - Jimmy Walsh, Windgap (chairman); PJ Kenny, Lisdowney (vice-chairman); Conor Denieffe, O'Loughlin Gaels (secretary); Barry Hickey, John Lockes (treasurer); Paul Fitzgerald, Fenians (PRO); Pat Tynan (Coaching Officer); Sean Breathnach, Dicksboro (Irish Officer); Ned Quinn, Mooncoin (Central Council rep); Willie Dempsey, Thomastown and Val Malone, James Stephens (Leinster Council reps); Pat Henderson, Fenians and Barry Hickey (delegates to Leinster Convention); Barry Hickey and PJ Kenny (delegates to Congress).