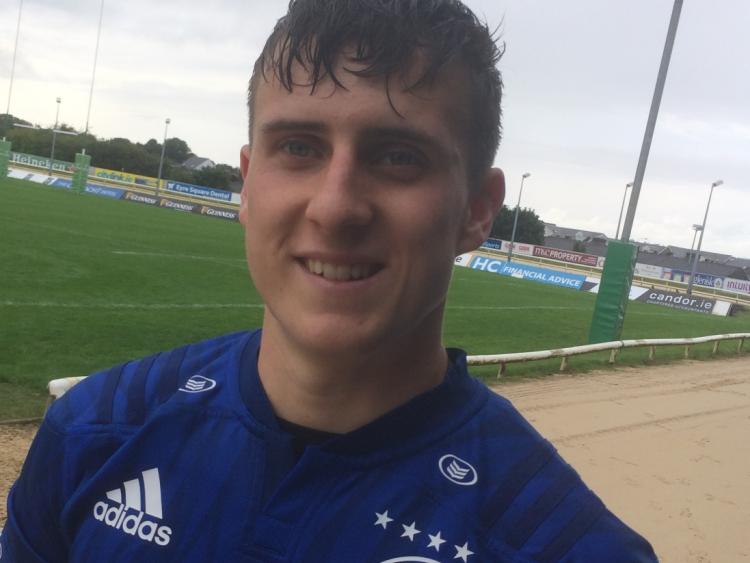 A gifted Kilkenny player who was introduced to rugby by his mother and was then coached by her, is making his way with the Irish under-20 squad preparing for the Six Nations championship.
Tim Corkery from Bennettsbridge is a rare talent.
He was part of the Kilkenny minor hurling squad two years ago and was a winner of international soccer honours with St Kieran’s College. Now his rugby career is shooting to the stars.
“He is a special talent, no doubt about that,” insisted under-18 Head Coach at Kilkenny rugby club Mick McGrath, who viewed Corkery’s inclusion in the under-20 Irish squad as a huge step forward in his fledgling career.
“He sees space where others don’t and he can turn space into opportunity,” added McGrath of the flying No. 10 who is in camp with the Irish squad in preparation for the opening Six Nations match against Scotland in Irish Independent Park, Cork on Friday (7.15pm).
Corkery, who earned a rugby scholarship to UCD where he is studying engineering, doesn’t do ordinary, apparently.
He played his first adult game with Kilkenny rugby club last season in the Provincial Towns Cup against Longford. He lined out at scrum-half.
However, by that stage he had already played at senior level with Leinster A.
His introduction to rugby 10 years ago when he was nine years old was ordinary enough, in that it was his mother Marie Louise who brought him to the Kilkenny RFC grounds at Foulkstown.
Because there was a shortage of people to look after the then tots, Marie Louise, a PE teacher in St Brigid’s College, Callan, simply got stuck in.
She worked with the players up to under-14 level when club coaches, Mick McGrath and Barry Daly, the first youths player to represent Kilkenny at provincial level, took over.
By that stage young Tim was already showing rich promise, and his mother’s rugby career developed too. She is now a Level 2 coach.
“He is very focussed, and he is a good decision maker during games. That is his strength,” insisted proud mum, Marie Louise.
Tim and Callan lad, Anthony Ryan, who is a flanker, are part of the 37-strong Irish squad which includes three No. 10s, so the battle to make the match day squad is huge.
Throughout his career young Corkery has hit all the bases with Kilkenny, south east squads and last summer he was the No. 10 when Leinster swept to victory in the inter-provincial championship.
Two years ago he was doing well with the Kilkenny minor hurling squad, but the call of rugby proved too strong.
Before that he had played with the Kilkenny and District League soccer team and won one of the major titles at the Kennedy Cup, a national competition.
That was before he had helped St Kieran’s College win the Allen McKinstry Cup, an under-16 international soccer competition between schools from England, Scotland, Wales and Northern Ireland, who had all won their national title.
Whatever the next few days hold for Tim Corkery, the family will travel in force to Cork on Friday, with dad Finbarr, mum Marie Louise and brother, Hugh, who plays with UL Bohs, heading to support the green.
The under-20 event is a full Six Nations competition with England, Scotland, Wales, France and Italy also involved.