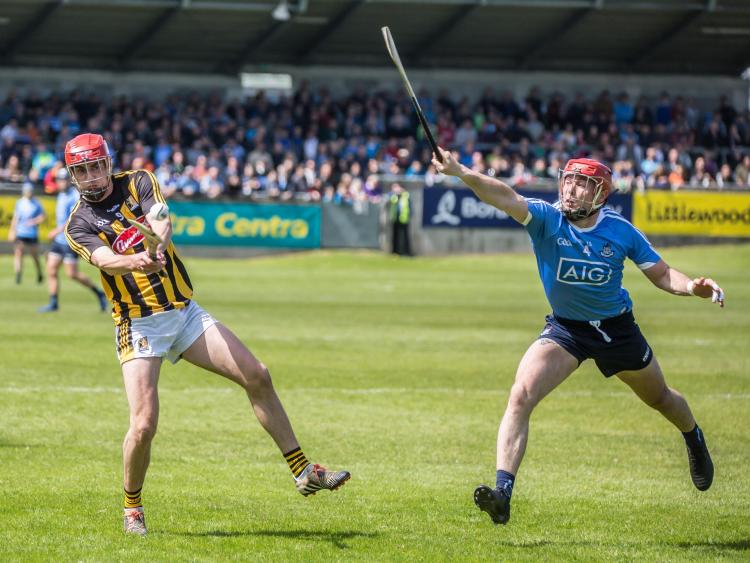 Kilkenny did the business without too much difficulty and without any fuss, and their third victory in the Allianz National Hurling League shot them through to the quarter-finals.

The unlikely star of the show in cold and wind lashed UPMC Nowlan Park today was young Shamrocks attacker, Eoin Cody, who captained the team. Not long ago Cody was a winner at schools level with St Kieran’s College, and today he stepped up on to the big stage with some assurance.

Laois had use of the wind in the second half and they charged into the job of trying to pull back the interval deficit of 1-8 to 2-15. They opened with unanswered points from James Ryan, Aaron Dunphy, Paddy Purcell and a mighty effort from Willie Dunphy from inside his own half.

This was all within three minutes of the restart, and they were on a roll. Cody stayed cool as he took over the free taking duties from Alan Murphy, who retired injured at the break.

Cody’s fourth score was the goal from a penalty after Walter Walsh had been fouled, and the scoring rush all but guaranteed Kilkenny a third place finish in Division 1B, which is likely to earn a home quarter-final tie.

There were goal chances aplenty during a lively first half when Kilkenny played with the strong wind. Willie Dunphy (L) brought the best form home goalie, Darren Brennan in the second minute after he beat the defence all ends up.

Kilkenny fared better when the first goal chance came their way in the sixth minute. Ciaran Wallace drilled a huge clearance out of defence. Ger Aylward won a breaking ball and created space by flicking a lovely ball to Billy Ryan.

The Graigue-Ballycallan man galloped through for a goal (1-1 to 0-1).

The winners set a constant more than spectacular scoring pace as they stretched out their lead after that. By half-time seven of their front eight players had registered scores. Walter Walsh was the odd man out.

Kilkenny held a fine 2-15 to 1-8 lead at the break, after the teams swopped late goals. The first was scored by Alan Murphy (K). Within seconds a stray back pass from a sideline cut by the home side led to Ross King getting a run at goal, and he was fouled in the big square.

The penalty was buried in the bottom of the net by Laois goalie, Enda Rowland to leave the score at 2-15 to 1-8.

Laois ripped into the opposition at the start of the second half, but Eoin Cody, with powerful thought and touch, guided Kilkenny through the difficulties and back on to the path to victory.