Kilkenny back on track... 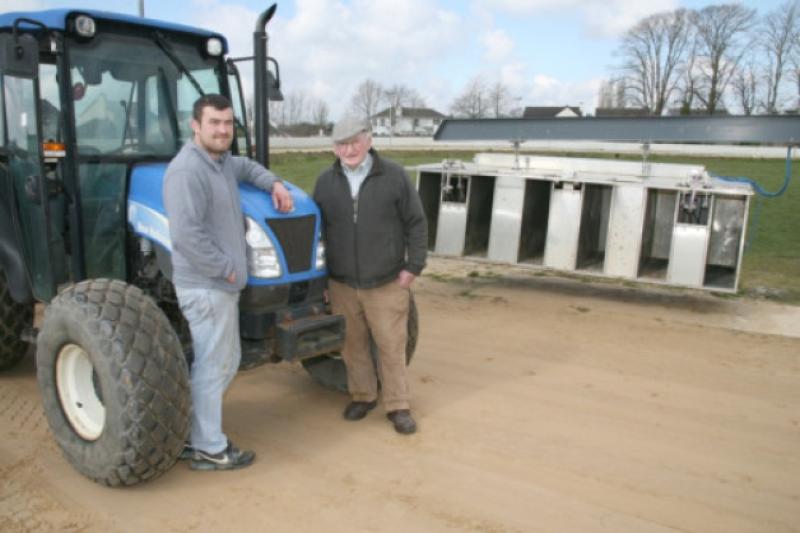 THEY would be classed as silent contributors to the local economy, an easy mix of business and sport. Yet the annual contribution would be knocking around the €500,000 mark, writes John Knox.

THEY would be classed as silent contributors to the local economy, an easy mix of business and sport. Yet the annual contribution would be knocking around the €500,000 mark, writes John Knox.

A small operation it may be, but the Kilkenny greyhound track is a valuable contributor.

The track is one of 17 such venues dotted around the country, and it has been staging racing since the forties.

Kilkenny is an independent operation licensed by and under the rules of racing of Bord na gCon, with the Bord the main providers of the €300,000 or so prizemoney on offer to winning owners each season.

The weekly prize fund would work out at roughly €5,500 - €200 to the winning owner in each race - which is claimed mainly by local owners and breeders.

“Kilkenny is a private track,” manager Tom Kinane explained. “It is our responsibility to make it pay. It is sport, but it is a business too. It has to be approached in that light. The track is doing okay. We are paying the bills.”

No more than in the country generally, they find the times challenging. Kilkenny run a tight ship. The guaranteed support of the Bord, and a vibrant Kilkenny Track Supporters Club that has ploughed more than €120,000 into developing the track and boosting prizemoney in recent years, help keep the show on the road.

This time of the year would be reasonably quiet, but come the softer weather, things will pick up.

In Kilkenny, the busy times run roughly from April to October or November.

“We lack top class facilities for spectators,” Tom observed, and then grinned at the suggestion that the once €1,000,000 state-of the-art development earmarked for the track might yet happen.

“It is hard to be appealing on a cold, wet night,” he added.

“At the end of the day, if you can balance the books you are fine. We managed to show a small profit over the last couple of years. But we must recognise the massive help we got from the Track Supporters Club to get to that position.”

The ’Club did powerful work in recent times redeveloping the track, upgrading facilities and sorting bills that needed sorting.

One of the main jobs the ’Club undertook was the laying of a new Silica sand track that is all but weatherproof.

“This type of track is good for soakage and is easy to work with,” explained Tom, who hails from Drom and Inch in Tipperary.

“It doesn’t dry too much or get too loose. It is compact. The drainage was poor. We have a brilliant racing surface now. We have a good ground staff who have pride in, and keep the place well. Injuries to dogs are at a very low level here.”

The racing surface is well maintained and would be brushed level three or four times each night during a nine race programme. Dogs flying at speed send the sand shooting into the air. Each Wednesday and Friday night, the track is in pristine conditions from first to last race.

Kilkenny wouldn’t be regarded as a fast track. It is rated 10 slow by the Bord, while Shelbourne Park has a 30 fast rating, for example.

Trials for greyhounds are now a major source of income at the track. Income here would be among the healtiest of all the provincial tracks.

The returns from trials in 2012 were better than for 2011. The opening three months of 2013 are better again than for the same period last year.

However, the number of dogs available for racing is down.

Yet Kilkenny have no intention of backing off from their packed 11-plus month racing programme. A short break over Christmas is the only down time at the St James Park venue.

“Because of the surface Kilkenny is an all year round racing track,” the manager assured.

“We lost maybe one night’s racing in December last year. If the weather was reasonably mild, we would race all year round. Only if the frost is really bad, would we be under pressure.”

Kilkenny has a very loyal band of owners, breeders and followers.

It is a very strong greyhound area, for coursing as well as racing.

There are a couple of counties in Ireland, including Limerick, Tipperary, Kerry, Wexford and Kildare that would be considered really strong greyhound areas.

Why? No one is sure. Tradition perhaps?

“There are people making a living out of greyhounds in the area. Trainer Paul Hennessy would be the most distinguished, and he employs a good staff. This track is a very important facility for these people.

“We could come in here on a Monday and have 20 trials. Michael and Sean Dunphy from Portlaw, they of the Droopsy prefix, have some of the best bred greyhounds in the country and they are regulars. They could trial 50 dogs a week.

“Matt O’Donnell, Seamus Graham would be here too. It is great to see people like that coming. It is a vote of confidence in the track.”

“We have great sponsors,” Tom insisted. “We are lucky to have the like of Red Mills, Eamon Langton, Pius Phelan, Springhill Hotel and so on.”

Kilkenny is a great betting track, apparently. The turnover would be high among the five bookmakers.

“I think we are rated third highest in the country, not just in the province, for bookmaker betting,” Tom explained.

“We are well ahead of some of the developed stadia. The Tote wouldn’t be that high, although returns improved by €18,000 last year.”

The Directors actively encourage the use of the facilities at St James Park by fund raising groups who want to organise benefit meetings.

Benefit nights have been run at greyhound tracks for years. It is a great way for charities, GAA clubs, schools and so on to make money.

“Plus it is an inclusive, fun way of doing it,” suggested Tom. “People from an area are on a night out together, and children are free. We encourage these benefit nights. They introduce new people to the track all the time.”

The most successful nights are BEAM, O’Loughlin Gaels and St Martin’s benefits. BEAM, an exceptionally put together meeting, average around €20,000 annually.

They have running the benefit night for over 25 years. O’Loughlin Gaels are big hitters in this area too.

“For these benefit meeting it is all down the effort put in by the promoters,” Tom added. “If a group can establish it, a benefit meeting can be a great night out and a great money maker too.”

Kilkenny know they are on to a winner in terms of location, with the track a easy walk or short taxi drive from the centre of the city, with a top class road network serving the St James Park area.

“You have to be optimistic about the future,” Mr Kinane insisted.

“There is a great core here. I hear from colleagues at other tracks who are getting all sorts of abuse from patrons and so on.

“We don’t get that here. The people are behind us. They feel a part of the track because they have put so much into it themselves.

“When things were at a low ebb, that was when the real spirit of survival clicked in. People simply got stuck in and did whatever they could to help,” he continued.

“People are happy the track is open. They know that through their work and efforts it was kept open. The Kilkenny track is a contributor to the economy of the area.

“It is an important facility, and it puts a lot more money into the system locally than most people would realise. The Supporters Club are huge contributors to the upkeep and survival of the place.

“I know Kilkenny people appreciate the facility they have. There is a determination there to meet any challenge the future may bring. I would be very confident about the future of the industry in the area.”