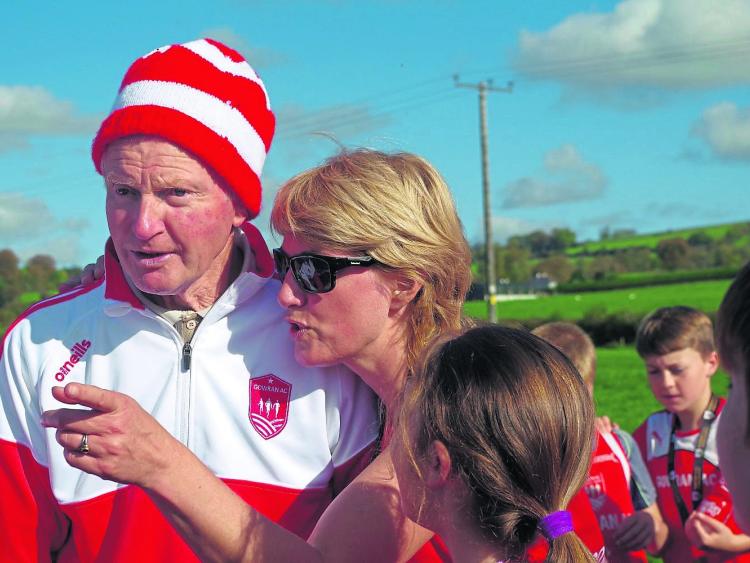 Kilkenny athletics guru Liam Kealy worked a bit of magic in 1997 when he invited Sonia O’Sullivan to join the Irish women’s team for the World cross-country championships in Turin. The team ended up winning the bronze medals (8k).
The previous year O’Sullivan had dropped out of the 5,000m final at the Olympic Games in Atlanta when she was the hot favourite to take gold, and no one knew for sure her plans for the 1997 season.
The Gowran man was in the crowd in the stadium in Atlanta and he felt the pain of the Cobh super star when she pulled up. When he was manager of the Irish team for the World cross-country championships the following year he set about getting O’Sullivan’s aboard.
He acquired her phone number from then Cork Examiner journalist, Brendan Mooney, and he took a chance on getting her to join the Irish squad.
O’Sullivan was living and training in Australia at the time. Much to Kealy’s delight, she jumped at the opportunity.
Huge Boost
“When she said yes that was a huge boost to all the other women in the squad, and Ireland went on to do very well,” the 72-year-old explained when recalling some moments from a lifelong love affair with the sport.
And with Catherina McKiernan (seventh), O’Sullivan (ninth), Valeria Vaughan (23) and Una English (25) all packing well, the Irish team finished third.
The following year O’Sullivan was even more enthusiastic about the World cross-country events in Morocco. When Kealy contacted her she said she was already training for them and she asked him to enter her in the short (4k) and long (8k) course races.
The double entry was to be kept a secret until shortly before the races, however. O’Sullivan went on to strike gold at the double in the races in Marrakesh.
“She was known as a track runner, but she was a supreme athlete,” Kealy insisted. “She was an animal for work and training. She threw herself into team effort and her presence lifted the whole Irish contingent.”
Liam Kealy managed the Irish cross-country teams for four years. During that time Ireland won medals in the European junior men’s race (Garrett Turnbull was third), and then there were the big strikes at the World cross-country championships.
He insisted that he got to enjoy athletics in Ireland during some of the great times, during the big winning times of John Treacy (two World cross-country titles in 1978 and 1979 (he attended the races in Limerick and Glasgow); silver at the Olympics in Los Angeles 1984); O’Sullivan’s glory days; Catherina McKiernan’s brilliance and so on.
Memories Shine
“The memories are disappearing, but some still shine brightly,” he insisted.
He toured the world to feast on the wonders of athletics, and he travelled at his own expense to seven Olympic Games - Moscow 1980; Seoul 1988; Barcelona 1992; Atlanta 1996; Sydney 2000; Beijing 2008; London 2012.
He had many a good tale to relate about those adventures. Let’s just say a fair dollop of good old Irish ingenuity was involved in acquiring tickets at times.
The most notable was for the athletics finals day in Atlanta. Liam and friends, Bill and David Duggan, ended up viewing the action from the VIP section. Michael Johnson was one of those who roared down the finishing straight in front of them as he won the 400m gold medal.
The short story. The tickets were chased through England and South Africa. They ended up with passes which were part of the Namibia allocation.
“It all probably cost me a bit too much,” he laughed, “but I was wrapped-up in it and I thoroughly enjoyed it.”
Athletics in Ireland was strong at the moment, he felt, and there was huge talent around, including in Kilkenny.
“There are a lot of good people doing a lot of good work,” he added.
He expressed huge admiration for Brian Maher, who is over 40, and he can still hold his own in the senior ranks. There is a posse of good young talent around too, male and female.
He offered thanks for the help and support received from his family, sisters Marian (RIP), Phil and her husband Pat Roche; the Dreelan family, Gowran, Connolly family, Bennettsbridge, John Connolly, Dunbell; the late Tom Hunt, Dungarvan; Catherine Whelan, who was secretary in Gowran for years; Denis Cormack, Goresbridge; and at County Board level Willie O’Keeffe, the late Tom Byrne, Bob Saunders (St Joseph’s), Marty Connolly (Castlecomer), Diane Walsh (KCH), Ed Williams and the late Fr Nicholas Flavin (both St Senan’s), Lorcan Barron, Sean Byrne and Lil Costelloe (KCH).
There were many, many others who always lent a helping hand or offered encouragment.
“Running helped give me a great life,” he insisted. “It was most enjoyable and I met superb people.”