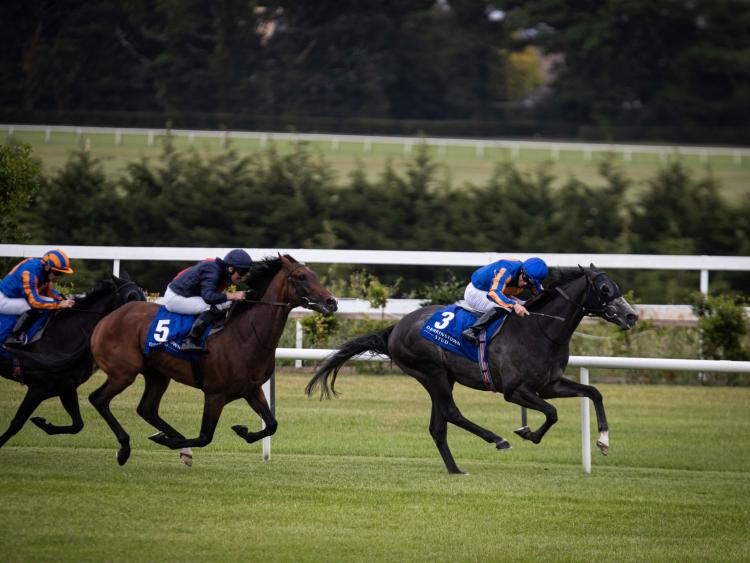 The Aidan O’Brien juggernaut is well and truly humming upon the recommencement of flat racing, yielding the first four winners at accumulative odds of 907/1 at Leopardstown today to augment yesterday’s Naas double and Love’s 1000 Guineas triumph across the channel in Newmarket on Sunday.

O’Brien bagged both Group 3 contests on the card, the first as Cormorant provided the Ballydoyle trainer with a staggering 13th triumph in the Group 3 Derrinstown Stud Derby Trial, 22 years after Risk Material scored under Christy Roche.

Dual Derby-winning pilot Padraig Beggy judged the fractions to perfection on the 12/1 outsider, who staved off the challenge of stablemate and favourite Russian Emperor to claim the spoils by half a length.

Beggy booted the son of Kingman to the front and then steadied the pace before kicking for home off the bend to establish a gap that was to prove significant in the end, although the runner-up remains a likeable prospect with the benefit of further experience and another stablemate Iberia also showed well in third.

“He’s a horse that ran plenty of times last year and ran to a good level” said Beggy of the winner. “The blinkers first time I think made a big difference. He’s led me at home a couple of times in work and he keeps going.

“Our horses have started in good form and any of Aidan’s, when you’re riding in a big race like that, it doesn’t matter the price, they have a chance.

“When I was going through the gears from the four to the three to the two, every time I’d pick him up he’d lengthen and he’d lengthen but he has experience.”

Seamie Heffernan had a double for his boss, Love Locket (6/1) taking the honours in the other group contest, the Leopardstown Fillies’ Trial with one and a half lengths to spare form Know It All.

In what was an incident-packed affair full of hard-luck stories, Heffernan stayed out of trouble with similar tactics to Beggy and once his partner opened up turning for home, the result was not in doubt.

“It’s good to be back, making a few quid!” quipped Heffernan, who has four winners on the board from two days’ action.

“She’s a big filly and her work was good. She’s done well from two to three. I don’t see why she wouldn’t get a mile but she mightn’t have to go a mile.

Heffernan got the show on the road in the Irish Stallion Farms EBF 3YO Fillies’ Maiden over a mile and two furlongs on Ennistymon (11/8), owned and bred by Evie Stockwell, mother of Coolmore supremo John Magnier.

The daughter of Galileo belied a 348-day absence from her promising second on debut with a gutsy effort, fighting back to deny Dermot Weld’s debutant Shamiyna by a head, having fallen behind inside the final furlong. The runner-up will not have to wait long to shed her maiden status.

Tiger Moth (16/5) led home an O’Brien 1-2-3-4 in the Irish Stallion Farms EBF maiden for three-year-old colts and geldings, getting the splits and exhibiting commendable attitude when requested to do so by Wayne Lordan, to battle his way to the front and win a shade snugly from stablemate and favourite Dawn Patrol.

The unlikely tilt at going through the card floundered at the hands of Kevin Manning and Ten Year Ticket, who looks a contender for bigger things for trainer Jim Bolger and owner Nicholas Teehan.

The giant Rock Of Gibraltar colt was the most inexperienced contestant in the Holden Plant Rental Trial Stakes but followed up his maiden success at the Curragh on soft going last October, by extending tremendously on this good-to-firm ground inside the final furlong to snatch the verdict from the O’Brien-prepped King Of Athens.

The last three contests, the Leopardstown Handicap for three-year-olds and the divided Leopardstown Handicap for four-year-olds and older, were garnered by Confidence High (28/1, Andy Oliver/Billy Lee), who may be aimed at a quick return to this venue on Sunday; Lady Savannah (22/1, Tom McCourt/Andrew Slattery), who was getting off the mark at the 17th attempt for owner-breeder Oliver Curtis; and Palabres (20/1, Peter Fahey/Chris Hayes), who benefited from an enterprising ride by Hayes to just cling on in the lucky last.