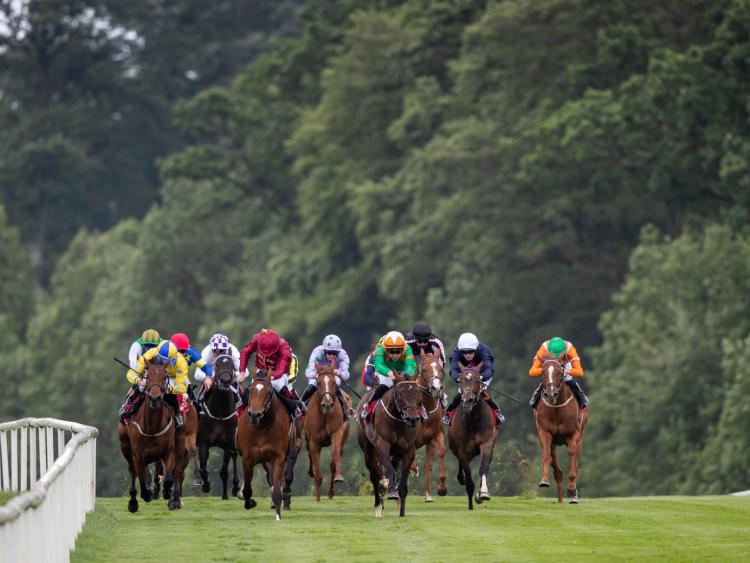 Action from the second division of the Irish Stallion Farms EBF Fillies Maiden, which was won by the Michael O’Callaghan-trained and Leigh Roche-ridden Faire Croire (on outside in green)

The Aidan O’Brien and Jessica Harrington strings might have been grabbing the headlines but Ger Lyons is another trainer who will be pleased with how his representatives have been running since racing resumed in Ireland this week.

The boss of Glenburnie Stables saddles the favourite for the Tattersalls Irish 2000 Guineas in Siskin and stable jockey Colin Keane provided the perfect boost with a double at Gowran Park to bring his tally since Monday to four, with another quartet finishing in the first three.

Maker Of Kings (7/2) claimed the Irish Stallions Farms EBF Maiden for three-year-old colts and geldings on his first run for Lyons, having displayed plenty of ability in four runs as a juvenile for Gordon Elliott.

Perhaps the key element of that affair was Keane guiding his partner from the 10 stall to a perfect position in the slot behind pacesetter Jungle Cove. It was uncomplicated from there, as Maker Of Kings answered the rider’s calls to prove a ready winner, although Ming Warrior kept him honest and got within three-quarters of a length.

The ultra-consistent Bucky Larson (7/2f) had been aimed for the Irish Lincolnshire but was unable to get in, so there was some consolation by garnering the Support the Irish Injured Jockeys Handicap in smooth fashion, with Tommy Taylor and Royal Highness dead-heating for second a length and a quarter back.

The trainer’s brother and assistant Shane was in attendance, revealing that Bucky Larson was a companion of Siskin’s during the winter and admitting that it was a fillip to have the horses running so well ahead of the biggest day of their professional careers to date.

“He’s been a great servant all winter, and a companion to the likes of Seskin. He deserved that and hopefully there’s another big handicap in him.

“It all helps to keep the confidence going when they’re winning but I wish it was Saturday morning!”

Denis Hogan is eyeing Royal Ascot next week with crack sprinter Sceptical and the Cloughjordan conditioner is another buoyed by the health of his horses, Mulzamm (15/2) providing a third triumph of the week in the first division of The Download The Boylesports App Handicap.

Seamie Heffernan got a dream run up the inner to take it up at the furlong pole on Above Us Only Sky but Joe Doyle effected the perfect slingshot move, following the leader out of the pack and then nabbing him in the shadow of the post.

Henry de Bromhead is better known for his prowess with chasers but the Knockeen trainer is adept on the level too and Annexation (5/1)ran out a very comfortable victor of the second division, Wayne Lordan sending the four-year-old to the front turning for home and the duo were untroubled in triumphing by two and a half lengths.

The Irish Stallion Farms EBF Sillies Maiden for three-year-old fillies was divided and the first division provided Chris Hayes with his third winner this week.

The Limerick pilot navigated the Fozzy Stack-trained Lynn Britt Cabin (13/2) to the outside at the two-furlong marker to overcome the leading quartet up the stiff rising finish, pipping Bestrella by a neck with Magic Chegaga a head back in third in a stirring finish.

It was a tight conclusion in the second too though the locally-bred and -owned Faire Croire (15/2) would have been an unlucky loser had she not rallied to touch off Line Judge by a short head.

Leigh Roche, decked out in the Ballylinch Stud colours, had to sit and suffer off a slow pace into the straight. Once he found some daylight, he galvanised a stirring and definitive rally from the Michael O’Callaghan-trained charge without having to be too vigorous.

“She is a big filly with loads of scope” declared a pleased O’Callaghan. “I gave her one run over six furlong on heavy ground at Naas last year and we were happy enough with her run and put her away.

“At home she has been showing she is capable of winning a maiden and maybe a little bit better than that. It would be nice to find a conditions' race with her now and step her up gradually. I imagine she'll be able to get black-type.”

Harrington and Shane Foley maintained their blistering form by taking the last two races, bringing their respective tallies for the week to seven and eight.

Bella Brazil (5/1) nudged out the brave Feminista by a head in the Play Golf At Gowran Park Handicap, with At War another head back in third, before Shona Mea (9/2) signed off the day’s proceedings with a gutsy length win in the Kilkenny’s Medieval Mile Handicap.