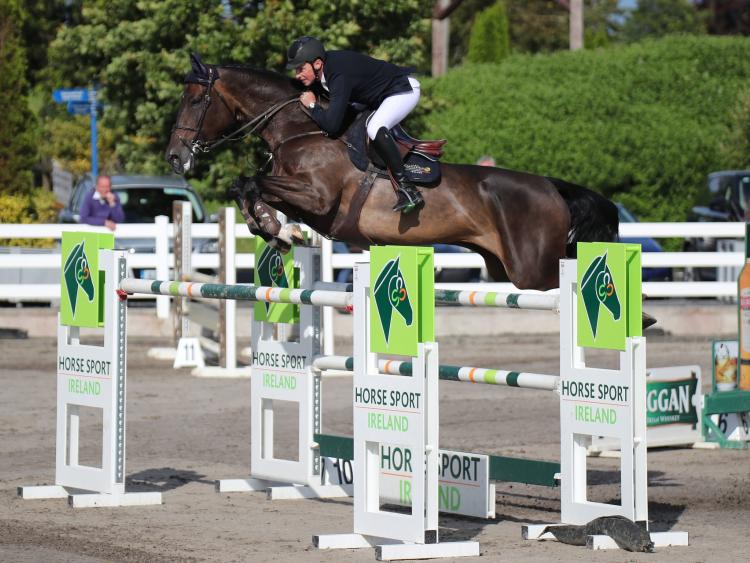 Kilkenny’s Ger O’Neill has moved to the top of the Horse Sport Ireland Premier Series league table following an impressive victory in the second leg of the series at Mullingar Equestrian Centre.

Riding the Sinead Brennan-owned MHS High Hopes (ISH), O’Neill was among 12 combinations who made it through to the second round where he produced another clear in 43.45 seconds to take the winners prize. The Bennettsbridge native and MHS High Hopes had finished as runners-up in the opening round of the HSI Premier Series at Barnadown in co Wexford and now move onto 18 points at the midway point of the series.

Waterford-born Army rider Capt Geoff Curran finished as runner-up in Mullingar with The Minister For Defence-owned HHS Clinstown (ISH) after they crossed the line clear in 45.09. It proved a memorable day from the Brennan family in Kilkenny as both of the top two horses were bred by the late Ita Brennan.

Kevin Gallagher partnered Ballypatrick Flamenco to a third place finish when clear in 46.07, while fourth place went to Young Rider Kate Conlon with Ping Ball. Kate Derwin and AHG Whiterock Cruise Down finished fifth on four faults with the fastest time of the jump-off, just ahead of Max Wachman and Lazzaro Delle Schiave in sixth.

The next round of the Horse Sport Ireland Premier Series will take place at National Balmoral on August 16th, before the final round of the series at Portmore on September 6.