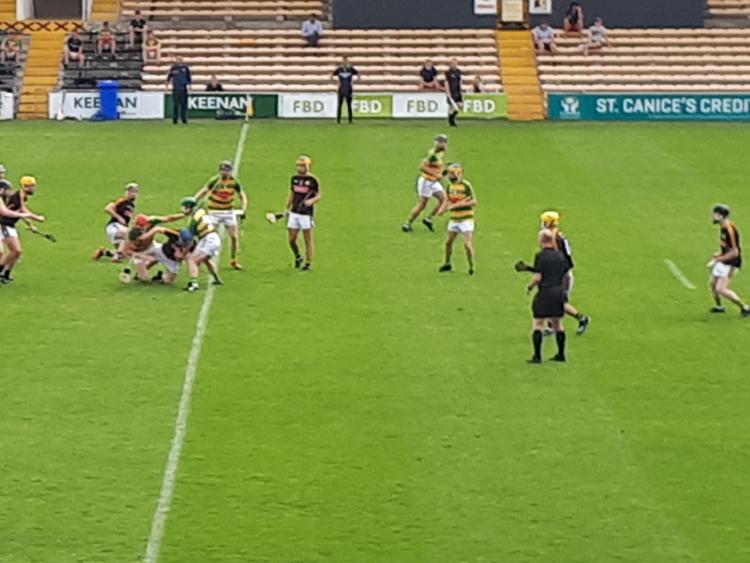 Goals from two penalties by Jason Cleere proved the obvious difference to the scoreline as Bennettsbridge emerged on top after a close-fought tussle with Danesfort at UPMC Nowlan Park this afternoon.

Danesfort looked the stronger from the offing, Richie Hogan's early frees keeping his side in front. Bennettsbridge struggled to get a foothold in the early exchanges, and the 'Fort roared into a lead of 0-7 to 0-1 after 12 minutes.

But before the first water break, a change in puckout strategy (from long to short) saw Bennettsbridge retain and use the sliotar more smartly; points from David Blanchfield and Darragh Wafer kept them within reach. Still, they knew they needed something more substantial to take control. It was Ciaran Brennan who duly obliged. He squeezed off a low, skidding shot from a tight angle to the goal, managing to elude everyone including goalkeeper Kevin Ireland, and nestle inside the post.

As play resumed after the water break, Bennettsbridge kept their foot down and the momentum stayed with them. Liam Blanchfield - who was a problem for Danesfort all afternoon - soon clipped the ball over the bar, and Brennan then pointed to level the scores for the first time.

The powerful Blanchfield was shortly thereafter adjudged to have been hauled down by Paul Murphy as he made a beeline for the goal, and a penalty was the result. Jason Cleere did the honours. His low shot found the net even with Kevin Ireland getting his hurley to it. At 2-4, 0-7, Bennettsbridge took the lead for the first time, and they would never relinquish it. The two goals were the difference as the sides went into the break at 2-9, 0-9.

Blanchfield and Murphy again tangled close to the goal area in the second half, and referee Sean Cleere deemed it worthy of a second penalty. Jason Cleere again stepped up to take the score to 3-10, 0-11. To Danesfort's credit, they did not roll over, with points from Aidan Cleere and a number from the hurley of Richie Hogan.

Perhaps too often, Danesfort relied on that man Hogan, who turned 32 today, to conjure something from nothing. As fine a game as he had, even with his trademark elusive running and 11-point total tally (nine from frees) he could not do it all.

Half an hour into the second half, his brother Paddy hit a fine goal from a free from the 21, with a low driven shot powering through a mass of bodies to make it 3-14 to 1-15. It rallied the troops, and two more Danesfort points followed in quick succession to keep the final minutes interesting. But two important points from Liam Blanchfield and substitute Jamie Harkin ensured the 'Bridge men stayed clear of their opposition.

Full report, teams and scorers in next week's Kilkenny People.