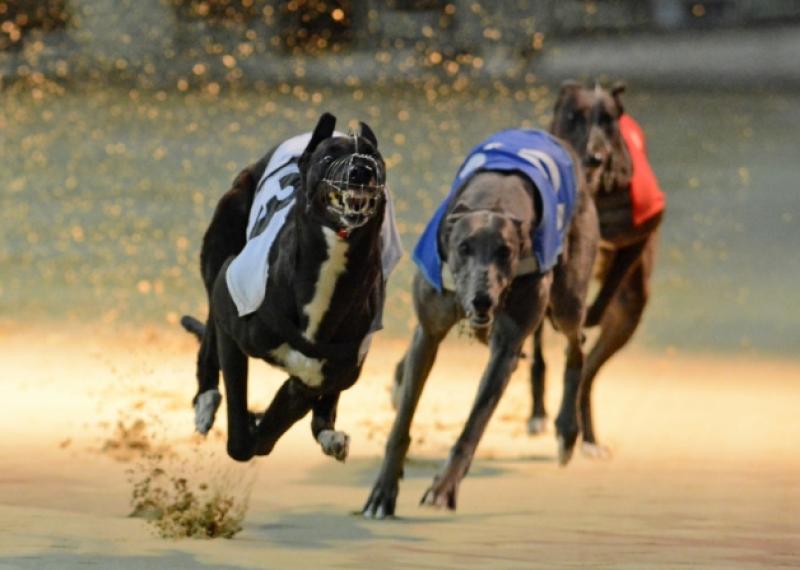 These are two of Kilkenny’s biggest pots. The well supported favourite lit out of the boxes but then saw Black Tom fly up on his outer.

Black Tom looked to be shading it into the first, but none run the first bend in Kilkenny better than Kilara Hey Mac. Again he took yards out of his rivals. Kilara Hey Mac went on and was four lengths ahead of Black Tom at the second bend. With the roars of the crowd ringing around, Kilara Hey Mac maintained that lead into the third.

The strong finishing Karlow Master came home best, but the Paul Hennessy trained son of Ullid Conor and Kilara Gypsy was across the line to claim the prestigious trophy. Kilara Hey Mac won by three lengths in 29.09.

The Springhill Court a3 final was won by Tinahue Pinto, while Skilful Paddy made it four wins from six in Kilkenny over 725 yards as he won the staying contest in 41.27.

The opener was level early and into the first bend. Random Megan came out of the bend well and led down the far side. Pink Lady moved with purpose into the third turn and was within striking distance.

Random Megan dug deep up front but she couldn’t hold Pink Lady, who got up to win by a length in 29.80.

In race two, a3 550, Hanoi started fast and led around the opening two bends. The Murt Leahy trained pace setter was four lengths to the good at the second as Condor Allie chased.

It was a chase in vain. Hanoi kept going and was an easy winner. Kilcloney Queen was a distant second. Hanoi stopped the clock in 30.46.

Blackstone Nero stepped out of novice company in fine style in the next race as he won the a4 525. The winner led up on the rails and bumped Daddy Said at the bend.

Nero went on and was seven lengths clear at the second. Kilara Diva gave chase. Blackstone Nero galloped home to win in 29.53.

The first staying contest saw Awaywitdedixies set the early fractions, followed by Kilbally Bob. A length behind at the third bend, Kilbally Bob hit the front at the 4th.

The new leader never got clear. Awaywitdedixies was back in front by the fifth. Deanross Andy was also on the premises but none of the trio manage to assert on the run home.

The David Flanagan trained Deanross Andy got the verdict in a three way go. The winning distance was a short head in 41.62.

As expected the a3 final went the way of Tinahue Pinto. The favourite was made to work by My Love Alsation. The pair were together from trap rise to nearing the last bend.

In the latter stages, Tinahue Pinto stayed better and won in 29.17. Unbeaten throughout the stake, the improving Tinahue Pinto was the worthy winner of the €1,000 first prize.

The Perry Aylward trained Skilful Paddy maintained his excellent record over the 725 yard trip. Skilful Paddy was in front early and missed the trouble at the first bend which left Magical Charles as his only real danger.

In race eight there were problems for favourite backers as the well backed Raggletaggle Rex stumbled. Upagear led up on the outer. Three lengths clear of Bellmore Shelly at the second bend, Upagear maintained that lead.

Bellmore Shelly kept on challenging but there was no catching Upagear, who won in 29.87.

In the last race, Condor Allie was the first to show. Allie was swamped between the bends, as both Garryglass Messi and Urard Pine went by.

It was nearly three in a line at the third as Ballybough Oz joined on the outer. In behind Kilcarrig Cillie was also closing. Garryglass Messi hugged the rails and eventually took advantage of that saved ground, winning in 29.57. Kilcarrig Cillie came through for second.