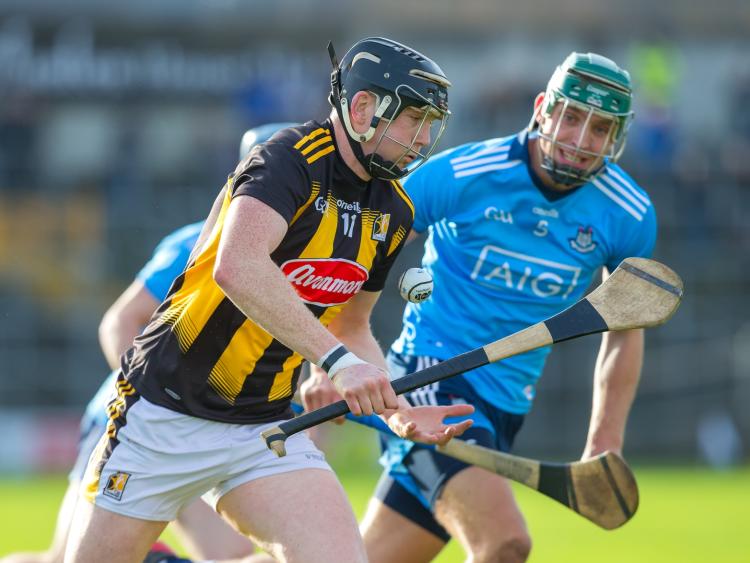 Walter Walsh in action for Kilkenny during their NHL game against Dublin earlier this year. The counties will meet in the championship this weekend

Kilkenny will aiming to complete a fantastic five when they collide with Dublin in Croke Park this weekend.

The Cats travel to the capital for a Leinster semi-final meeting with the Dubs, where a win will see them make it five straight victories over the Metropolitans.

It’s provincial semi-final weekend in the GAA hurling All-Ireland championships with three games on Saturday and one on Sunday.

Croke Park will host a double-header on Saturday, starting with the meeting of Kilkenny and Dublin at 3.45pm. That will be followed by the clash of Galway and Leinster champions Wexford at 6.15pm.

Dublin made the best possible start to the Leinster campaign when beating Laois by 14 points in Croke Park last Saturday, setting them up nicely for the big test against Kilkenny next Saturday.

Dublin wins over the Cats in the championship have been rare – only one in the last 78 years.

Their sole success in that period came in 2013 when they won a Leinster semi-final replay by three points. They later went on to win the Leinster title for the first time since 1961.

*Brian Cody is in his 22nd championship as Kilkenny manager; Mattie Kenny in his second season with Dublin.

*Kilkenny won three, drew one and lost one of their five Allianz Leagues games last spring; Dublin won two and lost three, including their clash with Kilkenny where they went down on a 3-21 to 0-18 scoreline in Nowlan Park.

They meet in the Leinster championship for a fourth successive year, with Galway having won in 2017 (nine points) and 2018 (six points) while the sides drew last year.

*Davy Fitzgerald leads Wexford into the championship for a fourth season while Shane O’Neill is in his first season as Galway boss. Wexford’s championship record under Fitzgerald is: Played 16, Won 7, Drew3, Lost 6.

*Goals have been scarce in recent Galway-Wexford championship games. The last three games in 2017-18-
19 produced only two goals – one each.

*This will be the 13th championship clash between the counties with Wexford having six wins to Galway’s
four while there were two draws from the previous 12.

The last two seasons have been very disappointing for Waterford who failed to win any of their eight Munster ‘round robin’ games. They also lost the 2017 All-Ireland final, leaving them seeking their first win in the championship since beating Cork in that year’s semi-final.

Liam Cahill leads Waterford into the championship for the first time while Kieran Kingston is at the start of his second stint as Cork boss, having previously managed them in 2016-17.

*This will be the 68th championship clash between the counties. It’s 47-14 in Cork’s favour with six draws. Cork also had a walkover when Waterford failed to field in 1890.

*Cork finished fourth in 1A of the Allianz League last spring (two wins, three defeats) while Waterford came second on the table (three wins, two defeats). Waterford beat Cork by a point in the opening round in Walsh Park.

The second Munster semi-finals pits the 2019 All-Ireland champions against the 2018 winners in what promises to be a great contest. Limerick were at their impressive best when beating Clare in the quarterfinal last Sunday, running out 0-36 to 1-23 winners.

*They met twice in last year’s championship, with each winning once.

*Limerick beat Tipperary by 2-14 to 0-18 in the opening round of this year’s Allianz League in late January.