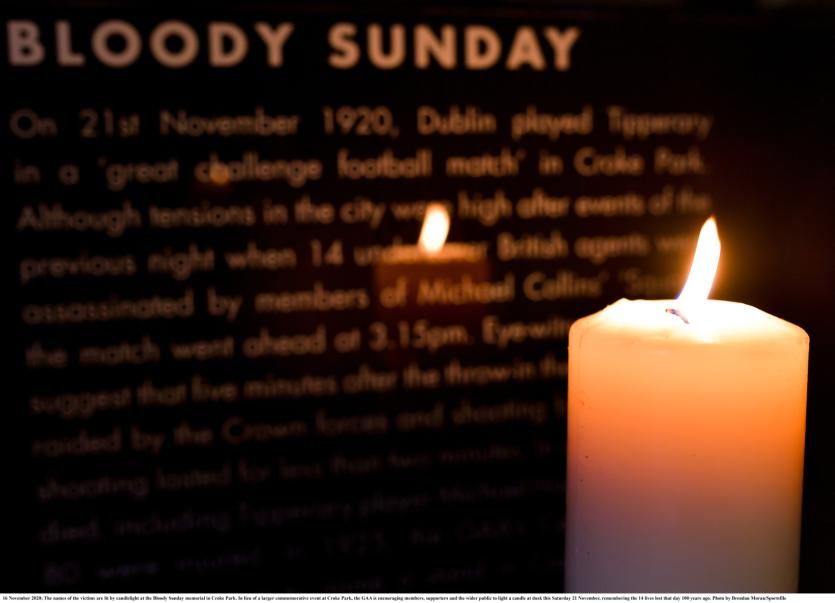 On Saturday evening next the GAA will stage a special remembrance ceremony to honour the 14 victims killed at Croke Park by Crown Forces on Bloody Sunday, November 21, 1920.

Over the last five years the Association through the GAA Museum at Croke Park, the GAA History Committee and the Bloody Sunday Graves Project has been engaged in a series of projects to remember those who were killed as a result of the massacre at a Dublin v Tipperary football challenge match.

The event was a seminal moment for the GAA and defining moment in the Association's link to the field on Jones's Road.

On Saturday evening the lives of the 14 victims will be remembered in a ceremony that will coincide with the lighting of 14 flames in a dedicated area of Hill 16 and a corresponding pillar of light dedicated to each of those who died.

Ard Stiúrthóir Tom Ryan and Uachtarán CLG John Horan will lay wreaths on the spot where Tipperary corner back Michael Hogan was fatally shot that day, an area of the field in front of Gate 43 at the northern end of the stadium. They will be joined by Uachtarán na hÉireann Michael D Higgins and An Taoiseach Micheál Martin.

There will then be a performance of a specially commissioned piece of music by the renowned musician Colm Mac Con Iomaire. The piece, entitled ‘More Than A Game’, was commissioned for use in the recent tribute videos produced by the GAA in honour of those who died and which have been viewed in excess of 20m times.

The ceremony will adhere to all protocols in respect of Covid-19 and will conclude at 6.30 for the arrival of the Dublin and Meath teams in preparation for their meeting in the Leinster senior football final.