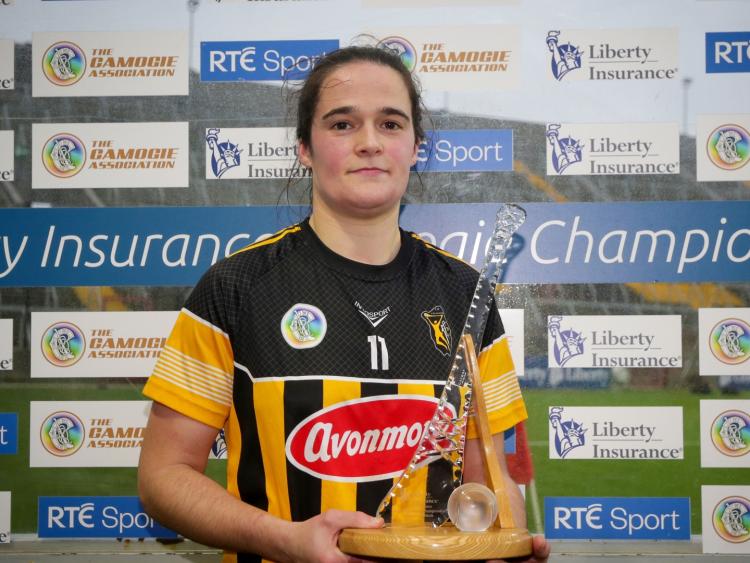 Goals might win games, but the real key to victory lies in the team performance.

While she ended up with the Player of the Match plaudits Ann Dalton was in no doubt who deserved the praise after the Cats battled past Cork to book a place in the All-Ireland final on December 12.

“Our defence won that game for us,” the former Player of the Year said as she reflected on a hard-fought win. “They were immense for us.

“However, when you look at the scoreline Miriam Walsh’s goal was the winning of the game.

It was vitally important how she scored and when she scored it – when she ran straight through their defence it lifted the rest of us, as it showed there was a certain weakness we could exploit.

“We knew that if we ran at them there would be scoring opportunities,” Dalton added. “We didn’t get any more, but when the chance was there, she buried it. That’s the important thing.”

The matter of going more than 20 minutes without scoring following that Walsh goal was a point of concern for Dalton, but victory means the Cats can correct that.

“That’s a massive worry, something we’ll have to work on.

The same goes with not being able to break their half-forward with our puck-out in the second half,” she said.

“I know there was a breeze there, but that’s no excuse. However, we have time now to work on it. It’s better to have that issue highlighted now rather than have it come up after an All-Ireland final.”

Grabbing a goal either side of the interval – Dalton picked off the first – proved key to Kilkenny’s victory. It also marked an incredible comeback for a team who fell behind to an early Cork scoring burst.

While Kilkenny came out cold, getting the chance to clear their heads at the water break played a big part in their revival.

“The break definitely suits the team that is under pressure or isn’t going through their purple patch,” said Dalton, her voice carrying through an almost-empty Pairc Ui Chaoimh.

“I think the big factor for us, starting off, was that we didn’t have the competitive game for a few weeks, coupled with the fact that Cork play a style that no other camogie team plays.

“While you have to get up to championship pace you also have to get used to Cork’s game; if you go play Galway or Tipp they do not play in that way,” she said.

“I’ve said it before that they play a Gaelic football type of game; it just happens to be with a hurley and sliotar.

That, on top of the few weeks off, meant we were slow out of the blocks, but we got to grips with it. Upping our work rate and getting the two vital goals helped us get over the line.”

It was a huge win for a Kilkenny side who not only conceded home advantage to Cork, but the favourites tag too.

“We were absolute underdogs going into that game and if anyone says otherwise, they either don’t know camogie or they were playing into Cork’s hands psychologically,” the St Lachtain’s/Lisdowney stalwart said.

“We knew coming down to Pairc Ui Chaoimh how good a team Cork were. They have some great players, and we were up against it. It came down to work rate and thankfully we pushed it over the line.

“Our defence, in the last 15 minutes, they were coming out with ball after ball even though it was raining down on them.

“We couldn’t seem to break that half-forward line, so that’s something we’ll have to work on for the next day. However, we’re just happy to get out alive.”

The two-point win, a result which secures a meeting with Galway in a repeat of last year’s final, will certainly bring on a Kilkenny team who had a lengthy lay-off between games after bypassing the quarter-final stage of the championship.

“We’ve had some great in-house games, but nothing compares to championship and 60 minutes of knockout camogie,” said Dalton. “It’s do or die if you don’t perform – if you don’t put in a shift you’re out.

“With Covid this year we couldn’t get the challenge games over the past few weeks.

I reckon Cork going 1-3 up (in the early stages) was because we came into the game a little cold, but we got to grips with their game and it came our way in the end.”

Much of Kilkenny’s recovery came through Dalton’s first half goal, a score which fired the Cats ahead for the first time close to the interval.

“I remember catching the ball and thinking ‘I’m going to made fun of now because I don’t catch too many’ but whatever about my goal Miriam’s was more important as that was the difference between winning and losing at the end,” she said.

“We’re forwards – we’re there to do a job,” she added with a smile. “As Roy Keane says you don’t pat the postman on the back for delivering the mail!”

The smile with the Keane reference spoke volumes of a player who is just grateful to able to play games in the midst of the coronavirus pandemic.

“We’re just fortunate to be able to play in these strange times,” she said of the senior side.

“There are under-age players who can’t play and our own intermediate side who have been pulled out of their competition, so we can’t take anything for granted.

You have to go to every training session and enjoy it. We want to win games, of course, but you have to enjoy yourself too.”

Enjoying the games is hugely important for Dalton. The idea of reaching finals and avenging previous losses? Not as much…

“The media play into a little, referring to how we’ve lost so many finals, but when we’re there we only think about 2020,” she said.

“If you think about any other year you’re thinking in the past and that’s no use to you when you go out on a pitch.

“The aim every year is to be in the All-Ireland final,” she said.

“It’s the day on the calendar for every player, from when you start playing as a child – that’s the aim.

It’s great to be back there, but it’s no use unless you win. That’s the focus for this year and every year. We fell short last year; now we have to push it on and focus solely on 2020.

“It’s not about last year or next year,” she added. “It’s about 2020 to us. If you play any other game bar the one in front of you, well you’ve no chance. December 12 is the only game we’ll be thinking about.”