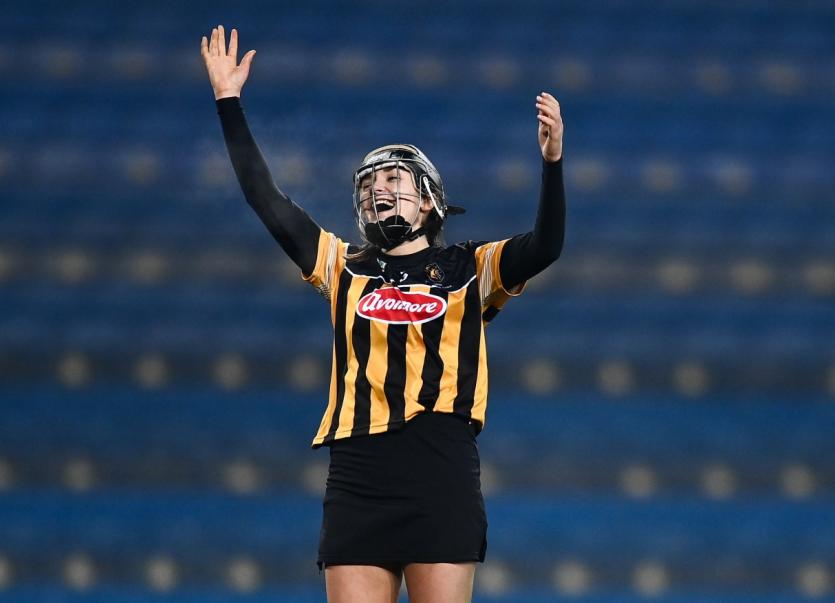 If anything summed up the determined defensive display of Kilkenny on Saturday night it was full back Claire Phelan catching a late ball Galway dropped into the square.

The Lisdowney star won the sliotar at her ease - it was just another aspect of the leadership skills from the on-field skipper.

The softly spoken defender still couldn’t hide her delight at the final whistle and praised the management for the job they had done with the team to get over recent defeats.

“I think we parked the last few years to be honest,” she said.

“The lads - Brian Dowling, Tommy Shefflin, Philly Larkin, Pat O’Neill, Ray Challoner and Angela Downey - have been drilling it into us that we are good enough. There were a few doubts over the last few years but they instilled confidence in us every time we went out to play.

“I think it showed there today as we had that belief and we worked as hard as we possibly could - thankfully we got over the line.

“I suppose it is special after the defeats,” she added. “The last few years were tough obviously but I think we have taken it year by year. This one was especially different in many ways but it was definitely special.”

Something that has often separated successful Kilkenny teams from the rest is workrate and that is something that was on full view for the camogie side as they ran Galway into the ground. The 2019 champions didn’t really have an answer.

“The effort of the players was unbelievable,” she said, “particularly in the second half where they turned over so much ball and it stood out a mile.

“You need that though if you are going to win against the likes of Galway and that workrate has to be there.

“Our forwards ran themselves into the ground in the second half and it’s brilliant for a back to see those turnovers as it drives you on even more so thank god we came up trumps with that,” Phelan said.

It was a real panel effort for Kilkenny as, despite a number of high profile injuries, they have unearthed a few younger gems.

A couple of those diamonds were on show last Saturday.

“We’ve a very strong squad,” she said. “A lot of younger girls have come in and since we came back training the competition for places has been brilliant and there hasn’t been an inch given to anyone.

Our training matches were as tough as you’d have out in Croke Park and maybe that’s what we needed for the last while.” she said.

“That bit of pressure really helped us and the younger girls were driving us on and you could see it there with the likes of Katie Nolan and Mary O’Connell in their first year playing in an All-Ireland final and they were absolutely brilliant.”

Unlike previous losing finals Kilkenny were able to overturn a half-time deficit to claim victory. For Phelan and co it just showed the incredible character that was in the Kilkenny dressing room to not give up.

“The Galway goal was an unlucky break for us as it just broke from a puckout, but we knew we were strong enough to regroup as it’s happened to us before,” she said.

“At half-time the management just told us to back ourselves as we’ve done this before in Cork where we stuck with the game plan so it was the same thing again and there was nobody going mad in the dressing rooms.

“Galway are a dangerous team but in fairness we did our job.”

Before leaving her media duties Phelan’s face lit up with the very mention of the name Anne Downey who was there to celebrate with her former charges.

“She has done everything for Kilkenny camogie either as a player or manager and it’s really special to see her here to celebrate with us, she also gave us a wave on the way in on the bus.”

That says it all.