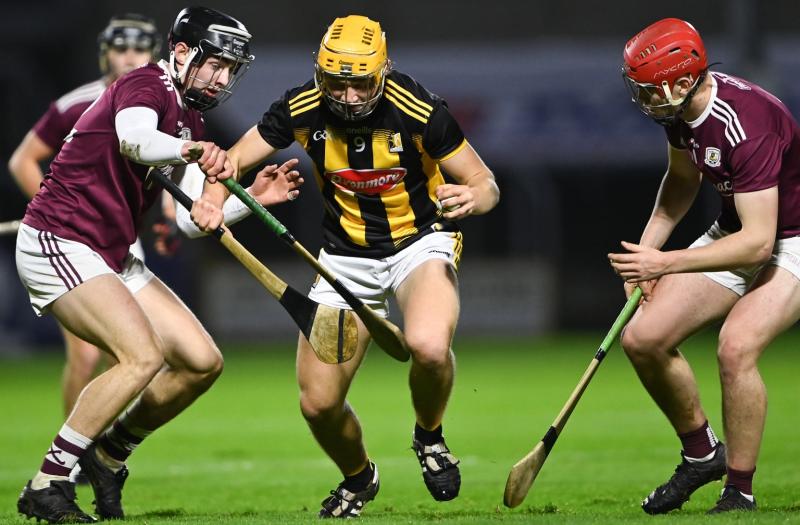 Kilkenny's Killian Egan fends off a couple of Galway challenges during the Leinster Under 20 Championship Semi-Final. Picture; Sportsfile/Piaras O'Midheach

Galway advanced to the Leinster Under 20 Hurling Championship Final after they deservedly ran out 0-19 to 1-11 winners over a disappointing Kilkenny side at O'Moore Park in Portlaoise.

Fresh from winning the last three All-Ireland Minor Titles Jeff Lynskey's Galway team were always in control after they finished the opening half with efforts from Donal O'Shea and Sean McDonagh to go three points clear at the break.

Just before that spurt Eoin Cody saw a couple of goalbound efforts brilliantly saved from Darragh Fahy in the Galway goal as the Tribesmen worked their way into control after a tightly fought opening period.

Galway were slow starters to the second half however and an Eoin Guilfoyle goal edged Kilkenny in front but the Cats were too reliant on scores from the James Stephens corner forward with all but four points coming from his hurl.

Galway were the better all round team with scores coming that bit easier and after that brief shock of the Kilkenny goal, they pushed clear on the scoreboard with Donal O'Shea who is the son of former Tipperary manager Eamonn knocking over points for fun in a display that totaled 0-12.

Kilkenny had a a couple of goal chances near the end of the game but Galway stood tall to advance to the provincial decider.