Brothers hit the target as magazine scores across globe

Robert Cribbin talks to Kilkenny’s James Carew, one half of the duo behind the Póg Mo Goal football magazine 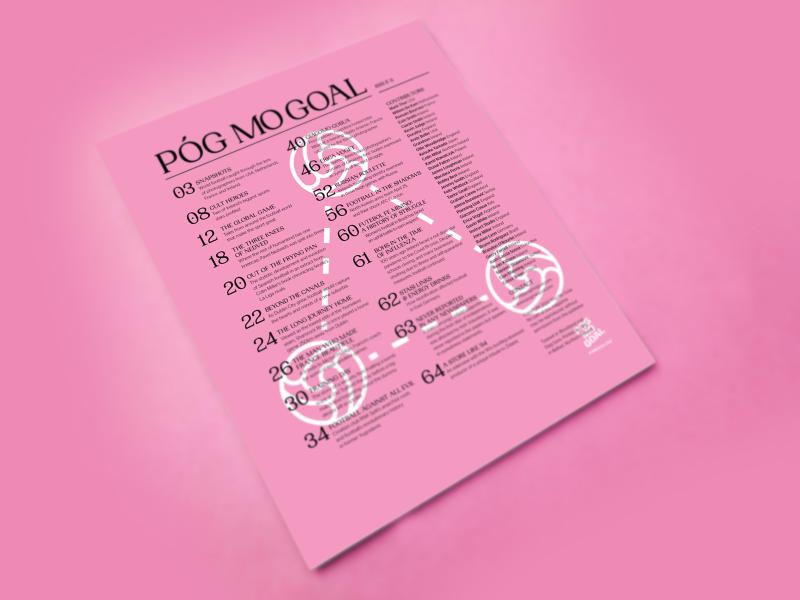 A pair of Kilkenny brothers are making waves in the football publication market.

Less than a decade ago James Carew and his brother Kie, who hails from Shellumsrath, set up the football magazine Póg Mo Goal.

The publication has gone from strength to strength since then as they take an alternative look at the “beautiful game”.

Inspired by the likes of Howler, the Blizzard and Mundial the Kilkenny duo have successfully ventured from a website at the beginning to a best-selling football magazine.

“We started off as a website with myself, a friend and my two brothers involved,” said James Carew.

“It started off nine years ago as a rather irreverent look at football and the Irish national team but as it developed one man’s funny is another man’s annoying.

“I had worked as a sports journalist while my brother is a graphic designer, so we wanted to put our work and our passion into something of more substance.

“It became a lot more about quality writing,” he continued.

“We focussed a lot on the design of crests, footballs and jerseys, all that sort of thing and again around the Irish matches we provided opinion pieces and analysis so we built up a bit of a following.”

As a result the lads spotted a gap in the market in Ireland and this proved the inspiration for the idea, which has seen numerous publications follow over the last few years.

The magazine covers football culture, design, opinion and feature writing from Ireland and the rest of the world.

“There was nothing that gave Irish football culture any type of billing on a par with the Premier League or other nations,” said James. “That’s what we started to do and we are on to our sixth print edition now.

“We initially started out as a newsprint format, but now we have moved to something more robust in a magazine with a spine,” he said.

“The whole intention of all these editions is that they are evergreen articles that are keepsakes which you might have on your coffee table or bookshelf so you can hold on to them and revisit them, at different stages.

“There are small pieces, long pieces, a focus on Irish content and then a focus on international content. We have Irish writers and contributors, but we also have Irish graphic designers, illustrators and photographers from all over the world, contributing as they have done in every issue.”

Carew perfected his craft by working with the likes of Sky Sports, Eurosport and the Bundesliga after he finished studying journalism in college. He has used many of these traits in Póg Mo Goal.

“I studied English and Sports Journalism in Madrid so I got to see Real Madrid and Atletico Madrid train as well as go to a couple of games, then I did an internship with Eurosport in London before working with Sky Sports.

“After that I moved on to Germany where I spent two years managing the social media accounts of the Bundesliga. It was a brilliant experience.

“I was living in Hamburg at that stage and a small team of us watched football all day every day, you could say it was the dream job.”

The aim of the brothers was always to provide something different and although there are numerous websites where you can find match reports and interviews on football they wanted to stand out from the crowd a bit.

“There are a million websites out there that will analyse a game or give you a match report and then there are certain places that will give you a little more in depth feature articles but there wasn’t really anywhere doing it from Ireland,” said Carew.

“There are good sites and journalists in Ireland but there wasn’t anyone bringing together art and football and the design of it.

“The key thing for us is how our magazine looks. This is as big a part as the writing and it’s intended to be something that is beautiful to look at as it is interesting to read.

“The latest magazine has stories from places like Cuba or North Korea. We explore Ireland at the same level as them because football is the universal language - you can go to any country and explore any club, village or town and you are going to get a story that people find interesting and that was our plan really.”

James’s love of football is what keeps him interested. Growing up in Kilkenny he had the opportunity to support the team in the League of Ireland as well as supplying articles for match programmes.

Seeing that type of success was great and he is hopeful of similar days in the future.

“We grew up going to Kilkenny City games as we lived just out the road, but at that time everyone went as they were winning games.

“They were the glory days as we called them when they got promoted to the Premier Division. It’s sad they aren’t there at the moment; if you speak to any football supporter around the world the key thing really is going to matches and looking out for your team’s result.

“We don’t have that anymore in Kilkenny, certainly at senior level, but there is still great work being done in Kilkenny soccer and has been for decades really.

There is a feature on the club in the magazine which is a personal favourite in being able to work our own club into it. I grew up watching League of Ireland, it’s what we did on a Saturday when we were younger.”

Póg Mo Goal is always looking to make improvements to its product and the added use of podcasts in recent issues is testament to that.

Despite it only being a passion for James it’s something he’s loved being involved in and is hopeful they can continue to work on over the next few years.

“Póg Mo Goal is essentially our hobby and our passion as it’s not my full time job or anything (James works in media relations) but we are going nine years so we are happy.

“It’s not easy publishing it as trying to get advertising and support in a tangible way can be difficult as we bring out an edition every year, but I think what keeps us going is that people like what we do and the fact that people from all around the world like what we do is important.

“We’ve a story about Bohemians in this year’s magazine but the design is from a Colombian graphic designer which is great - that’s what keeps us going.

“Hopefully we can keep people interested in the product and produce another magazine next year but this year’s one has gone well,” he said. “It will make a good Christmas present.”

The latest edition of Póg Mo Goal, issue six, is available to buy now from pogmogoal.com