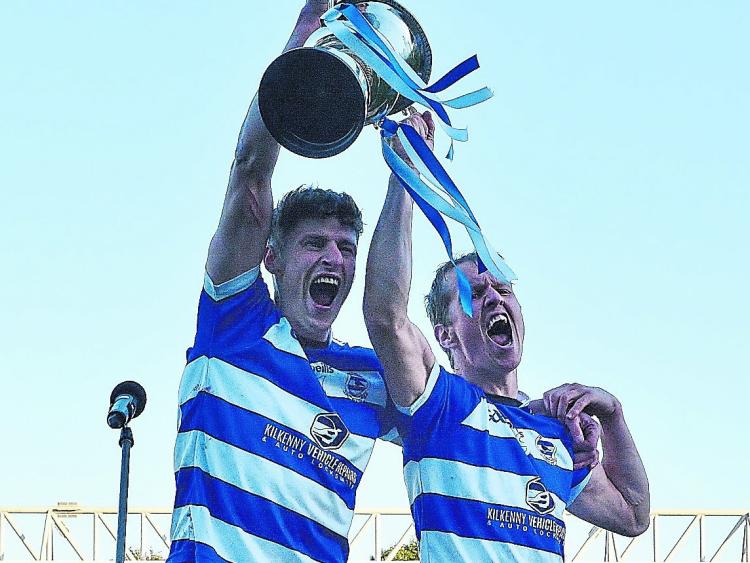 Of the three adult senior hurling grades, intermediate was the place to be if you wanted to see history-making hurling!

With the coronavirus pandemic giving rise to a revamped championship format in the county, replays were dispensed with in favour of the drama of a penalty shoot-out.

It made for a dramatic finish to the top game - the county final.

Here Lisdowney held their nerve, fighting back from near-certain defeat on several occasions to beat Thomastown in a tense and thrilling shoot-out.

A generation’s worth of joy exploded at UPMC Nowlan Park as the North Kilkenny club completed an incredible campaign by capturing the intermediate championship and a place in the senior championship for 2021.

They did it the hard way, and probably gave their supporters a few scares along the way, putting the small crowd through the wringer as they took an enthralling tie all the way to sudden death penalties.

All square after finishing level with Thomastown after normal time and extra-time. It seemed nothing could separate the teams after each converted three of their five penalties.

After that, the sides jumped on the rollercoaster for another turn.

It looked like Lisdowney had handed the advantage to Thomastown when Michael Kenny saw his shot whistle wide, but netminder Liam Dunphy pulled his side back from the brink of defeat when dived left to stop Robbie Donnelly’s effort.

So, to round two of sudden death!

Cathal Jordan was up next for Lisdowney, sending his shot sneaking inside the right post of the City End goal.

’Town goalkeeper Diarmuid Galway took his turn, but when his shot flashed wide the title was Lisdowney’s.

“You have to admire those players for the way they’ve worked all year,” said Lisdowney manager Martin Power as he watched his players celebrate.

“The way they have worked, particularly in the present Covid circumstances and conditions has been incredible.

“It’s been very difficult, given all these challenges, but these Lisdowney men stood up to everything over the entire campaign.”

The result capped an incredible year for Lisdowney, who shattered a hurling hoodoo on their way to lifting the Hanrahan Cup.

Although they had been back in the intermediate grade for seven years they had never been beyond the last eight.

They were beaten in five quarter-finals between 2014 and 2018, then lost to Glenmore in the opening round in 2019.

Things were different this time around. A 1-15 to 0-15 win over Young Irelands set them on their way. In the semi-final they took revenge on Glenmore for the 2019 defeat, booking their place in the final with a 1-17 to 0-19 win.

In a strange year for sport, Young Ireland (Gowran) were the first side in Kilkenny to win a championship game on penalties after they beat St Patrick’s (Ballyragget) in the first round of the championship. The Gowran men wrote their name in the record books when they beat the Saints 3-2 in a shootout after the sides had finished on 1-21 apiece after 80 minutes of action.

That result saw Ballyragget go into something of a tailspin. Billed as championship contenders at the start of the campaign, they ended it by dropping into the junior grade after losing the relegation final to Fenians (Johnstown) by 4-13 to 1-20.