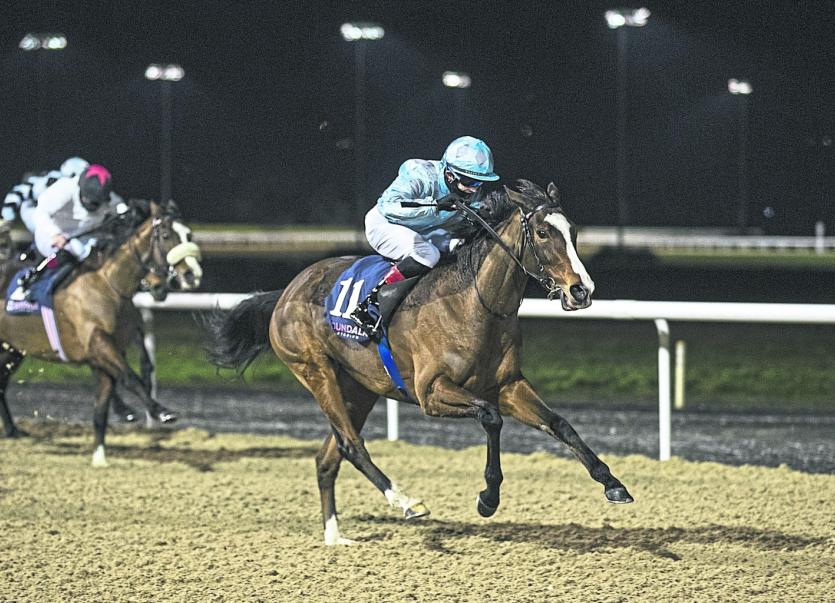 The Joseph O’Brien-trained Scholastic goes nicely clear under Mikey Sheehy on her way to victory at Dundalk on Friday. Picture: Patrick McCann/Racing Post

Joseph O’Brien had a quiet time of it over the busy Christmas and New Year period with just a single winner but he was back in familiar territory as Scholastic gained her first win on the all-weather at Dundalk on Friday.

Previously successful on the Flat at the Curragh, Limerick and Tramore and over hurdles at Punchestown, the four-year-old added to her tally when winning the two-mile handicap in good style under Mikey Sheehy.

He had the 4/1 chance up with the pace all the way and she was never going to be beaten once hitting the front early in the straight.

At the line, she had a length and a quarter to spare over the Pat Flynn-trained Jake Peter with her won stable companion Tonkinese a further length away in third place.

“She jumped from the stalls well and I found myself further forward than I would have liked,” said Sheehy. “But she travelled in my hands the whole way and quickened nicely. She has good form over hurdles and is versatile.

“Joseph brought her back to the Flat and that’s two good runs now over this trip,” he added. “Hopefully there is another one in her.”

Horse Racing Ireland moved quickly to announce new dates for three race meetings that were lost to the weather last week. There was no racing at Clonmel on Thursday due to the severe frost and that fixture has been transferred to Tuesday, January 19.

More immediately, Fairyhouse will have racing on Saturday, where the card features the Dan & Joan Moore Memorial Handicap Chase and the ITM Virtual Stallion Trail Hurdle for four-year-olds.

Two recent Cheltenham winners are among the horses going forward for the Dan & Joan Moore Memorial Handicap Chase at Fairyhouse on Saturday.

The Michael Winters-trained Chatham Street Lad, which won the Caspian Caviar Gold Cup Handicap Chase a month ago, and Emmet Mullins’ Unibet Greatwood Handicap Hurdle winner The Shunter, head an entry of 25 for the €75,000 event.

They could come up against the Joseph O’Brien-trained Front View, successful in a beginners’ chase at Fairyhouse last month and the Jessica Harrington-trained Impact Factor which would be bidding for a third Fairyhouse success.

Gordon Elliott has left in six horses, including Chosen Mate, winner of the Johnny Henderson Grand Annual Challenge Cup Handicap Chase at the Cheltenham Festival, while Willie Mullins has both Fan Des Blues and Pont Aven.

Also featuring on Saturday’s card is the ITM Virtual Stallion Trail Hurdle for which Gordon Elliott has entered Quilixios. An impressive winner at both Punchestown and Down Royal, he tops a bumper entry of 17.

“We are delighted to have another very exciting Dan & Joan Moore Memorial Handicap Chase on a great day’s racing at Fairyhouse on Saturday,” said Peter Roe, General Manager of Fairyhouse Racecourse.

“Impact Factor was an impressive course and distance winner in the Easyfix Handicap Chase in November after which this race was immediately nominated as his target while Chatham Street Lad will be bidding to follow up on his Cheltenham win for the popular Cork trainer Mick Winters.

“The going is currently heavy with an unsettled mid-week forecast but hopefully an improving forecast towards the weekend.”