Mullins hoping to Blaze a trail in Leinster National at Naas 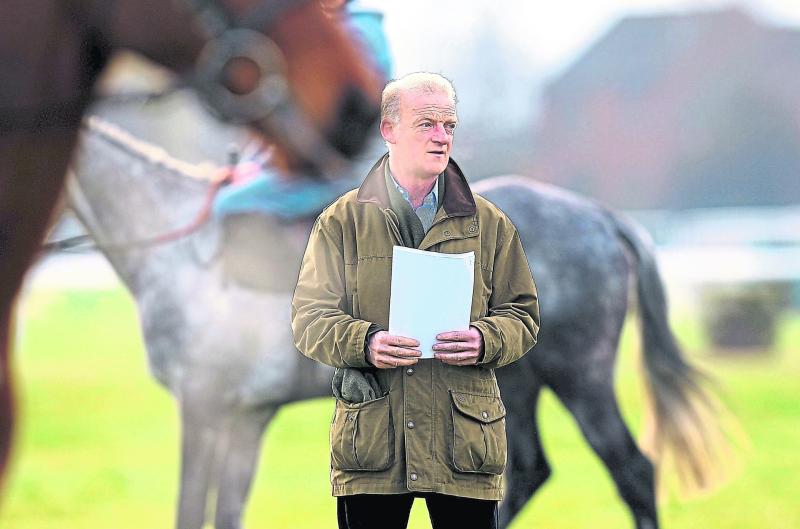 Willie Mullins will lead the Irish challenge travelling to the Cotswolds next week but in the meantime, the champion trainer will field a strong team as he attempts to land the final big prize before the Cheltenham Festival, the BARONERACING.COM Leinster National.

With three of the 16 runners in the €80,000 feature, Mullins will be hoping to add to the success of Pairofbrowneyes a couple of years ago to win a second renewal of the Naas three miler.

Owner JP McManus is strongly represented with six declared runners and the Jody McGarvey partnered Blazer is a horse  who has always threatened to win a big race according to assistant trainer Patrick Mullins.

The champion amateur, who assists his father at Closutton, said on Friday morning: “Blazer has always threatened to have a big one in him.

"He finished second to Sharjah in a Galway Hurdle. He’s got a lovely racing weight in the Leinster National on Sunday.

"He’s definitely going to pop up one day at a big price in one of these types of races so hopefully it could be this weekend maybe.”

Class Conti tops the weights following his third placed effort in the Thyestes Chase and Saturnas wasn't far behind him in fourth on that occasion.

Mullins continued: “Class Conti has top weight, which is going to make life difficult for him. He ran very well in the Thyestes. Hopefully he can get some prizemoney again but with top weight it’s going to be hard to win.

“Saturnas ran very well in the Thyestes as well. I think he could come forward from that. He’s got plenty of weight as well, which again won’t make life easy, but I’d expect him to be in the money hopefully."

The Philip Fenton-trained Atlantic Shore will continue his rise through the ranks as he looks to make it three on the bounce in relatively quick succession.

Local success could be on the card as in-form trainer Oliver McKiernan is double handed in the race with Best Behaviour and Lean Araig due to make the relatively short journey from his Rathcoole base. Carbury-based Philip Dempsey will be hoping that Ten Ten can go one better than his latest outing over hurdles at Fairyhouse as he returns to fences, while Castle Oliver will return to the scene of his biggest triumph yet for Curragh native Padraig Roche having won a valuable Grade B handicap chase at Naas just over a year ago.

The Grade 3 Bar One Racing Download Our App Kingsfurze Novice Hurdle has some extra intrigue with the presence of French Light who is under the care of American handler Kerri Brion.

Brion has stabled a small string in Ireland this winter and the six-year-old faces seven rivals including recent winners Alko Rouge and Bay De Rio. Goodbye Someday is the highest rated of the field having earned a mark of 140, while a drop back in trip is hoped to rejuvenate Shadow Rider.

Patrick Mullins commented: “He was disappointing in Leopardstown at the Dublin Racing Festival. We’re dropping back in trip and we know he’ll handle the heavy ground because he won on it in Limerick. He shows us a lot at home so we’re hoping he can get back on track.”

The first on an eight race card at Naas is off at 1.30pm this Sunday and TG4 will have live coverage from 2pm.

To mark the first of a five year sponsorship deal with Bar One Racing for the BARONERACING.COM Leinster National, Naas Racecourse are also running a competition for a chance to win €1,000 with of free bets courtesy of Bar One Racing. Further details can be found on www.naasracecourse.com/competition.

Click here to see declarations for the BARONERACING.COM Leinster National Day at Naas this Sunday