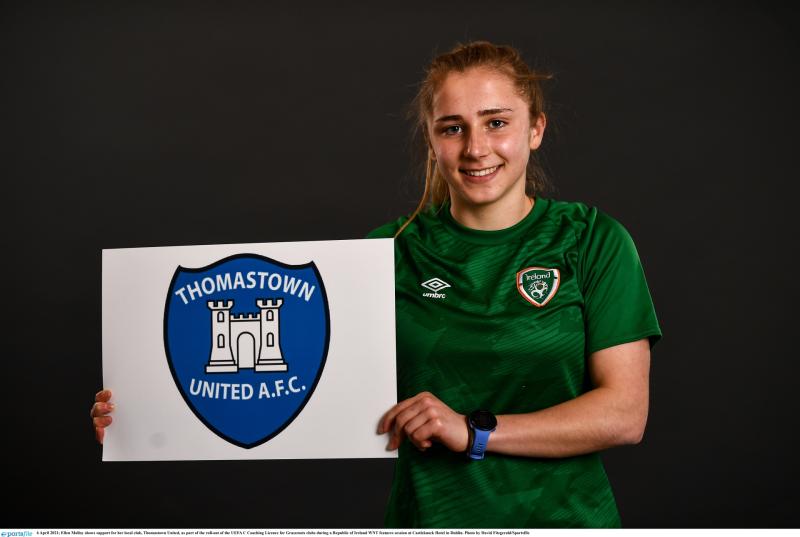 Ellen Molloy shows support for her local club, Thomastown United, as part of the roll-out of the UEFA C Coaching Licence for Grassroots clubs. Molloy started with United before joining Wexford Youths

The Inistioge teenager, who will be in international duty tomorrow (Thursday) with the Republic of Ireland’s women’s team, was one of a number of players to show their support for clubs who wish to attain UEFA certification for their coaches as part of a new European-wide roll-out of the UEFA C Licence.

Molloy, who started out with Thomastown United before joining Wexford Youths in the Women’s National League, is one of the 24-strong squad drawn from 40 grassroots clubs represented from 10 different counties. These clubs have helped shape the development of players like Molloy through coaching from dedicated volunteers.

The new UEFA C Licence will help to inspire those coaches who bring the game to life for players of all ages, genders, abilities and background.

“Over the last number of years, UEFA have helped develop the profession of coaching to new lengths,” said FAI Head of Coach Education Niall O’Regan. “It is now great for our Grassroots coaches to be able to experience and be certified with a UEFA Qualification.

“In the coming months, we will begin the process of delivering the newly created UEFA C Licence and UEFA Leaders Award which is directly aligned to our Club Mark programme and these UEFA Qualifications will be recognised as the pinnacle of Grassroots coach education here and throughout all convention countries in UEFA.”

Molloy is looking forward to more game time as the Girls In Green face into two games this week. She is looking to add to her international caps haul after Irish manager Vera Pauw has narrowed down the squad ahead of international friendly games against Denmark and Belgium.

Ireland will play host to Denmark tomorrow (Thursday) in Tallaght Stadium before travelling to take on Belgium in the King Baudouin Stadium, Brussels on Sunday.