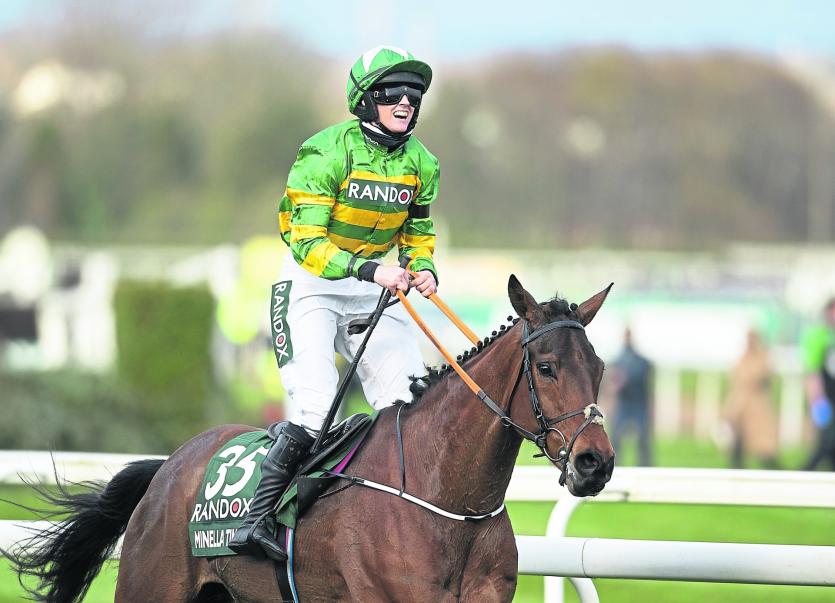 Racheal Blackmore became the first woman to ride the winner of the Aintree Grand National when soaring to success aboard Minella Times. Picture Grossick Racing/Racing Post

The dominance of Irish jump racing was very much in evidence at Aintree where the trailblazing Rachael Blackmore stole the show with her historic winning ride on the Henry de Bromhead-trained Minella Times in the Grand National on Saturday.

Remarkably, 10 of the first 11 horses to cross the line were trained in Ireland and in all, six different Irish trainers sent out seven winners over the three days of the festival.

In addition to the Grand National success, Denise Foster was responsible for two Irish-trained winners, Abacadabras and Tronador, both ridden by Jack Kennedy.

Arthur Moore took the Grade 2 mares’ bumper with the Blackmore-ridden Me Too Please, Peter Fahey and Kevin Sexton shared Grade 1 success with Belfast Banter, Joseph O’Brien and Mark Walsh scored with Fakir D’oudairies and Willie and Patrick Mullins were winners over the Grand National fences with Livelovelaugh.

Kevin Manning was in the saddle as the 3/1 chance kept on stoutly from the furlong pole to beat Jessica Harrington’s Ace Aussie by a length and a half.

“He’s in both Guineas along with Mac Swiney,” the winning trainer’s daughter Una said. “We haven’t decided yet whether he’ll go to Newmarket or the Curragh but they won’t run in the same race. I’m told he could go anywhere and the boss is very happy with them."

They won the opening eight-furlong maiden with 85/40 chance O’Reilly which got the better of a protracted battle with the Aidan O’Brien-trained 7/4 favourite HMS Seahorse to score by a neck and followed up in the seven-furlong handicap with the well-backed 4/1 favourite Real Appeal.

He had an easier time of things and came home a length and a half to the good over Ado McGuinness’ Dream Today.
Wexford Winner

Richie Deegan was among the winners at Wexford on Friday where he teamed up with Paul Nolan to win the two and a half-mile maiden hurdle on Fortune Street.

Deegan had the 10/1 chance in front over the second last hurdle and the eight-year-old ran out a one and a half-length winner from the Peter Fahey-trained Lucky Tenner.

Shark Hanlon took the evening’s finale as The Cool Dude ran out a comfortable winner of the three-mile one-furlong handicap chase under Jody McGarvey.

The 11/2 chance won by five and a half lengths from the Philip Rothwell-trained Enduring Love.

Easily the most impressive winners of the day at Gowran Park on Wednesday was the Joseph O’Brien-trained Queenship.

With Mikey Sheehy in the saddle, the 3/1 joint-favourite romped to a five-length success over the Aidan O’Brien-trained Elizabethan, her main market rival.

The EuroLindy Syndicate-owned will certainly be stepping up in class when turning out again.

O’Brien was a winner again at Gowran Park on Thursday afternoon where he took the three-year-old handicap over eight furlongs with Visualisation.

Shane Crosse was in the saddle as the gambled-on 6/1 chance scored a two and three-parts of a length success over the Andy Slattery-trained Rock Etoile.

Dylan McMonagle completed a double for the Piltown trainer in when taking the second division of the 13-furlong handicap on the Maxwell Morris owned and bred Merrior.

The 4/1 shot won easily by three lengths from the James Nash-trained Alohamora.