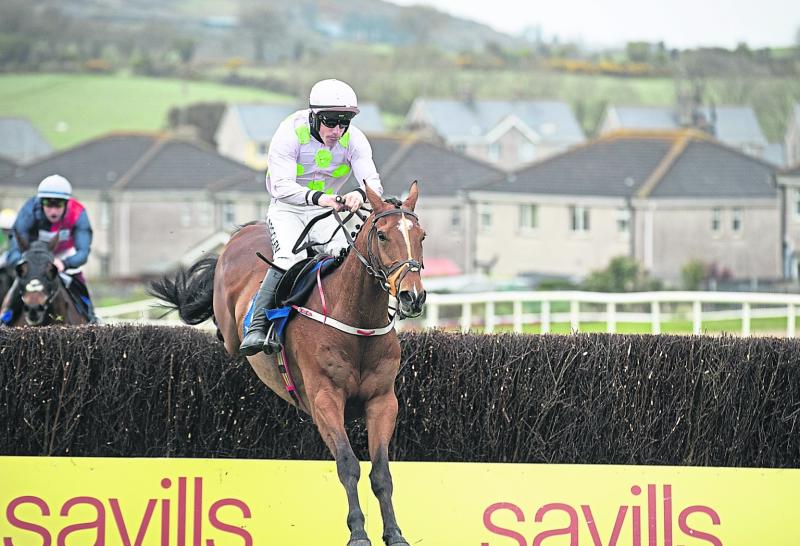 Willie Mullins’ Bapaume and Brian Hayes jump clear over the final fence before going on to win in great style at Tramore on Sunday. Picture: Patrick McCann/Racing Post

Willie Mullins recorded a treble at Tramore on Sunday, the champion trainer sharing his winners with Brian Hayes and Conor McNamara.

Hayes had an easy time of it on both the Tiger Tail Again Syndicate-owned Gelee Blanche, which won the mares’ maiden hurdle at odds of 3/1, and Bapaume which bounced back to winning ways at odds of 11/8 favourite with an authoritative eight and a half-length success over Joseph O’Brien’s Us And Them in the Tramore Racecourse Directors Chase.

And it wasn’t much harder for McNamara who partnered even-money favourite En Beton to a six-length win in the opportunity maiden hurdle from James Dullea’s 2/1 chance Rocky’s Howya.

While his father Aidan dominated at the Curragh on Saturday with four winners, Joseph O’Brien also got on the scoresheet thanks to the Dylan Browne McMonagle-ridden Raise You which led home a 1-2 for the Piltown stable in the eight-furlong handicap.

Despite veering badly to his left early inside the final furlong, the 9/2 shot got home by a neck from his own stable companion Fame And Acclaim.

Piltown trainer David O’Brien enjoyed a great weekend on the track and was among the winners at Ballinrobe on Friday where Minx Tiara ran out a clear-cut winner of the mares’ handicap hurdle.

Owned by the Fastey For Fun Syndicate, the six-year-old made most of the running and went clear from the final flight for a six and a half-length win over the Henry de Bromhead-trained Tune The Chello. Kevin Brouder was on board the 5/1 winner.

O’Brien followed up at Tramore on Sunday where My Oakclahome, owned by Denis Tarrant, won the two-mile five-furlong handicap hurdle under Ryan Treacy. Like Minx Tiara, he made all the running and beat the Henry de Bromhead-trained Demain Des L’aube by a length at odds of 9/2.

Joseph O’Brien dominated at Leopardstown on Wednesday where he recorded a treble, highlighted by the impressive success of the Declan McDonogh-ridden Southern Lights in the 10-furlong maiden.

The 4/1 shot got to the front over a furlong from the finish and stretched nicely clear to win by two and three-parts of a length from Jessica Harrington’s Hell Bent, which was ridden by Shane Foley.

O’Brien followed up in the handicap over the same distance with the English-import Dancing Approach which scored by half a length from the Andy Oliver-trained Pin Your Hopes under Shane Crosse. McDonogh completed a double of his own when winning the seven-furlong handicap on O’Brien’s Larado which held on by a head to deny Jim Bolger’s fast-finisher Vocito by a head at odds of 11/1.

Eoin Griffin won the rated novice hurdle with the Mark McDonagh-ridden Jody Ted which carries the colours of the winning jockey’s father and namesake.

The 11/1 chance came from well off the pace to win from the Shane Crawley-trained Cotteemcavenniegoal and now heads to the Punchestown festival later next week.

Mullins had made all the running on the Jessica Harrington-trained Thegoaheadman and still held a two-length lead when the seven-year-old got it all wrong at the final fence.

He did well to keep the partnership intact but lost all chance with the mistake and was soon headed by Butler’s charge, the 5/2 favourite which was ridden by JJ Slevin who had earlier taken the second division of the two and a half-mile maiden hurdle on Stuart Crawford’s Now Where Or When.

Joseph O’Brien took the beginners’ chase with the Donagh Meyler-ridden Star Max which scored by half a length from the Noel Meade-trained Dis Donc at odds of 5/2.